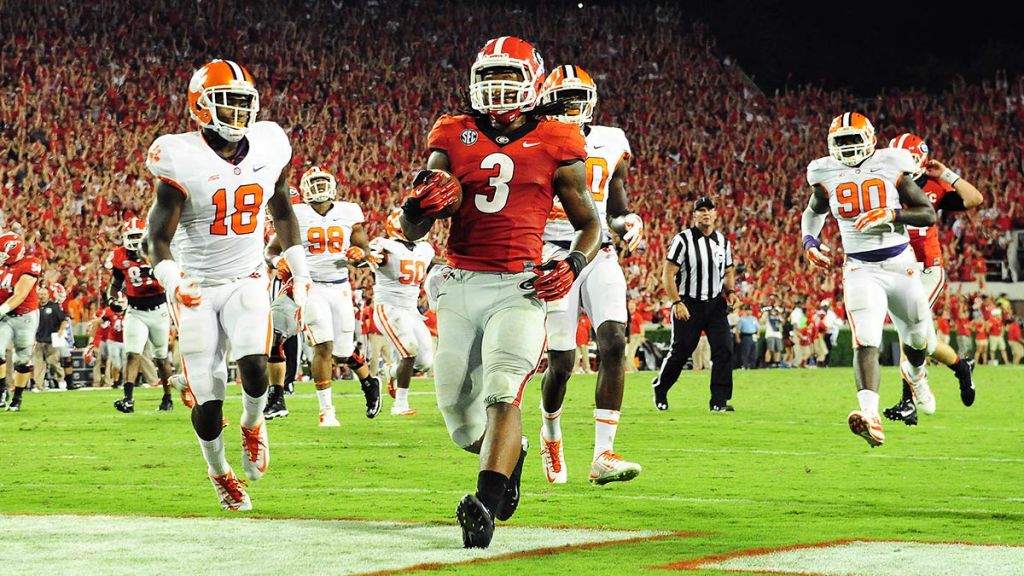 How one final realignment could save college football

In the aftermath of the conference realignments of 2005 and 2010-2014, college football remains popular, but is full of disappointing realities for its most traditional fans. Texas doesn't play Texas A&M. Nebraska doesn't play Oklahoma (or Colorado, or Missouri). Pittsburgh doesn't play West Virginia (or Penn State). And Missouri doesn't play Kansas.

There is also an imbalance in the conferences' respective rules that makes the sport overall less engaging from a national standpoint. I am a passionate Georgia fan and SEC fan. But how does any of the following make sense if the "Power 5" is supposedly the cohesive competitive field for a national championship?

In addition, even the conferences' respective rules for schedules, divisions, and championships can differ between the leagues. All of this will inevitably lead to an utter mess for the current College Football Playoff. Not to mention the high degree of difference in non-conference scheduling.

Take Georgia's 2031 schedule, for example - where the non-conference slate includes road trips @ Ohio State, @ Georgia Tech, and a home game against Oklahoma. So, depending on the SEC cross-divisional rotation (unknown beyond 2025 at the moment), Georgia could theoretically play 12 games against Power Five opponents including traditional powers like Alabama, Ohio State, Oklahoma, Auburn, Florida...in the same season. Depending on the year, those could all be Top 10 teams. They likely will be this year (although Auburn is preseason #11). Not to mention an additional conference game - against another Top 10 opponent - if you include an SEC Championship Game.

How can that schedule possibly be compared by The Committee to, say, an Oregon team that year (if their non-conference is weak and/or Pac-12 remains in its current state)? How does an 11-2 SEC Champion with that schedule compare to a 13-0 Pac-12 champion that same season?

This is not an SEC bias. Turning the comparison on its head, take Ohio State and Auburn in 2025. Ohio State plays 9 Big Ten games (including Wisconsin, Penn State, Michigan State, and Michigan) and non-conference games against Texas and Washington. Auburn is currently slated to play Baylor and South Alabama (with 8 conference games). How would they compare those teams evenly?

It's impossible to predict, but the point is clear: comparing 2 teams with different conference power, conference schedules, and non-conference scheduling, makes any Playoff Committee difficult. They've gotten it right thus far, but there will be inevitable controversy so long as the dynamics in the Power 5 remain this way.

And finally, but most importantly, the geography makes no sense. Auburn is in the West while Missouri is in the East? Texas A&M plays South Carolina every year (1,037 miles away) - but doesn't play Texas anymore (107 miles away)? West Virginia and Texas Tech are in the same conference, but West Virginia and Pittsburgh are not? This not only doesn't make sense in a normal season, but during this season with COVID and conference power struggles, "now is the time to reconsider college conference realignment" (see Ivan Maisel's terrific piece on this).

So here is my proposal.

The principles are basic:

The "Power Five" would realign into 4 conference of 16 teams each (Notre Dame replacing Rutgers as a "power" team), with a focus on rivalries, regional geography, and program power to balance scheduling and competition.
The CFP would become the "Super Six" - 6 playoff teams (the 4 power conference champions plus 2 at-large teams) with the top 2 seeds earning a first-round bye.
The new "Power 4" Conferences would be:
Three important notes:
**All teams would play 9 conference games (7 divisional, 1 permanent rival from the other division, and 1 rotating game from the other division).**
**To see permanent rivals, look across the row in the other division.**
**All teams can schedule their non-conference how they see fit, but must play at least 1 "Power 4" team in non-conference each year. Teams can choose to make full-time / 'permanent' non-conference rivalries as well (i.e. Miami and Notre Dame if they so choose). Teams also must schedule 1 FCS money game at least once every 4 years, but can never play 2 FCS opponents in the same season.**
Here are the new conferences:
Southern Conference (Sugar/Peach)
Eastern Conference (Orange Bowl)
Central Conference (Cotton/Fiesta)
Western Conference (Rose Bowl)
After the regular season, each conference has its own championship game between their divisional champions at those respective bowl sites (i.e. the Western Conference Championship Game is The Rose Bowl).
Once the 4 conference championships are won, on Selection Sunday the committee will seed the top 6 teams in the country (4 conference champions and 2 at-large teams), with the top 2 seeds earning a bye.
A fun test: check out the annual games (column or row), and potential conference championship games on your own. Pick a team from each column to meet in a conference title game at that bowl site. Every matchup has some weight - because the geography, traditions, and competitive balance are all there.
Traditionalists and young fans alike can appreciate an Ohio State-USC matchup in the Rose Bowl with a conference championship and playoff berth on the line. Oklahoma-Texas A&M, or Texas-Nebraska in a Cotton Bowl? Penn State and Virginia Tech in the Orange Bowl? Georgia-Miami in the Sugar Bowl, or Clemson-Auburn in the Peach Bowl?
All of these with both a conference championship and a Playoff berth on the line? Yes please. This system also ensures a more fair evaluation for teams with harder schedules because of the competitive balance across the board. Every conference has 16 teams. Every conference has 9 conference games. Every conference champion gets in. Every team plays at least 1 Power 4 team in non-conference, and you can't play 2 FCS teams in the same season. And evaluating the 2 at-large bids is easier because of this correction of imbalances.
Let's go back to the 2031 example. Today, an 11-2 Georgia who wins the SEC might not get in over a 13-0 Oregon. In this system, they'd both be in and it would be settled on the field. The comparison of the at-large bids becomes easier as well given the automatic berth of Power 4 Champions. You pick the best 2 teams in the country that didn't win their conference. It wouldn't be any more controversial than anything prior in the history of college football. The equal playing field across the board makes it easier to measure the teams (same number of conference games, same conference and divisional set-up, and mandatory rules for non-conference scheduling that force matchups).
College football needs one last realignment to save itself for good.