Mark Smith, Jr., is a fraternity brother of mine. He's an Athens boy (Cedar Shoals HS) and a UGA graduate. He's also an excellent photographer. You can check out his public photos from UGA games on his Facebook page. It turns out he's also a pretty good storyteller. I hope you enjoy it.

It was the greatest job any college freshman could hope to have. In 1983, shortly after starting classes at the University of Georgia, I landed a job working at Green Hills Country Club making $5 per hour flipping burgers and renting golf carts. And country it was. Located in the sticks, near the muddy banks of the Oconee river and close to the Clarke / Oconee / Oglethorpe county lines, Green Hills was a non-irrigated, nine hole, bermuda and dandy lion sodded golf resort destination for the working man. Its small membership was a consortium of plumbers, well diggers, security officers, insurance salesmen, college professors and the like who all wanted an affordable place to wager, drink and have a few laughs while chasing a little white ball with a stick. They did not have to ask me twice if I wanted the job.

Once on the job, Jerry was one of the first members I met. Kind of short and a little round, he was always wearing glasses and a golf cap. He mumbled a bit, yet was one of the funniest guys I have ever met. Jerry was retired from some state job and was enjoying every minute of it. He and a bunch of other retirees and semi-retirees met every morning at 8:00 for their standing tee time. About a dozen of them in all, they called themselves the Dog Fighters. Jerry was their ringleader. Every weekday morning they would grab a cup of coffee and go straight to the first hole. An hour and a half later they would start making it back to the clubhouse for a quick bite or bathroom break after completing the first nine. Getting back on the course as quickly as possible, they would play the same nine holes again and be done by noon. It was like watching the Daytona 500 of golf.

Upon completion of the round, they would then proceed to the parking lot to settle up and have a few drinks. They all would gather at the open lift gate of Jerry's Toyota Corolla station wagon .It was always parked right next to the clubhouse and in it Jerry kept a well stocked bar. On weekdays, they would be done by 4:30. On weekends they would play until they had to use a cigarette lighter to figure which golf ball belonged to who in the dark.

It was a spring morning, during start of the Member-Guest Tournament, when an obnoxious fellow from Ohio came through the door running his mouth about everything he saw. "What kind of grass is that?" "In Dayton, we use electric carts - cheaper to maintain." "Is this the clubhouse? It doesn't look like a clubhouse," on and on. He paid me his green fee and cart rental and was paired with a group of Dog Fighters. There was a welcome silence as they all left the clubhouse and headed down to the number one tee. This was short lived.

Five minutes later the fellow from Ohio came running back up to the clubhouse. He burst into the door and shouted "Someone call the cops, that guy just attacked me!" He was holding his groin, his glasses were all jacked up and he was bleeding from the bridge of his nose. "That guy, Carroll, he punched me in the face and kneed me in the nuts!" He wanted his money back, which I refunded and the guy left for the parking lot. "He is crazy, someone needs to call the cops on that guy," he said going out the door. Carroll was one of the regular Dog Fighters and it was well known he had a short temper. When Jerry's group came up the fairway from playing the front nine, I went out to tell Jerry about what had happened. He had already heard about it. He laughed a little bit and said, "That guy was a real jackass, he wouldn't shut his mouth while folks were teeing off. If Carroll didn't beat his ass, I was going to." They did not call them Dog Fighters for nothing.

Jerry was always there at opening time. He even had his own key to the gate. He used white golf tees exclusively. He knew which carts ran the fastest and always made sure I had the coffee ready for when the rest of the guys got there. Being a small time operation, Jerry even filled in as the club manager (for free) during the many times Green Hills was between managers. It was Jerry who showed me the lion on a pack of Camels. Everybody loved Jerry, yet no one (including Jerry) knew why they called him Jerry when his real name was George.

A couple of years went by and I had still not been fired. I outlasted three different managers. Manager number four was introduced to us as Mike Merola. Mike was a retired educator and coach from New Jersey. He also played defensive end for the University of Georgia and was a member of the 1948 SEC championship team and captain of the 1950 team. Impressed with his resume, we couldn't help but ask him about Georgia football. What bowls did you go to? How did you get to play for Georgia? It turned out that Mike was a student at UGA and was playing in a pickup game on the Reed Quad when assistant coach Howell Hollis saw him and asked him to come out for spring practice. Mike was a big guy with a strong voice, he looked like a former football player, yet he was very humble and hesitated to talk about his playing days at Georgia.

One night when we were closing up, I was a little bit irritated that the Dog Fighters were still in the parking lot. I was ready to leave and could not go until they left. Jerry came in the clubhouse to get some more ice for his cooler and returned to the parking lot. I guess I must have looked less than amused. 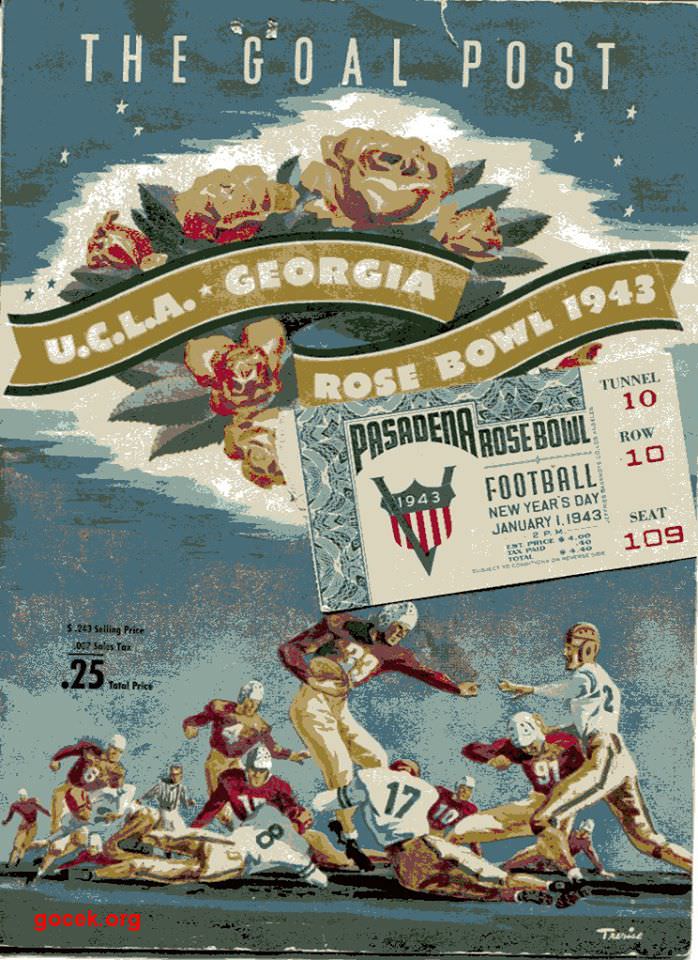 Mike asked me, "Do you know who that is?"

I said, "Yeah, that is Jerry Nunnally."

He answered, "George Jerry Lamar Nunnally of the 1943 Rose Bowl team that won the national championship, that is who he is. He got me this job. If he wants to stay in that parking lot all night it is OK with me."

Up until that point, the whole time I was working there I never knew who Jerry was. He never talked about it and neither did his friends. They all loved him for who he was every day, not just in 1942. I later learned that Jerry also served in the Army during WWII where he received both a Silver Star and Bronze Star. Again, this was something he never talked about. Jerry died in 2004. Mike died in 2009. Of course, after leaving Green Hills I never kept up with either.

In a couple of weeks, I will have a chance to walk on the same field that no Georgia team has stepped on since 1943. I can assure you, there will be a white golf tee planted deep somewhere in that turf.