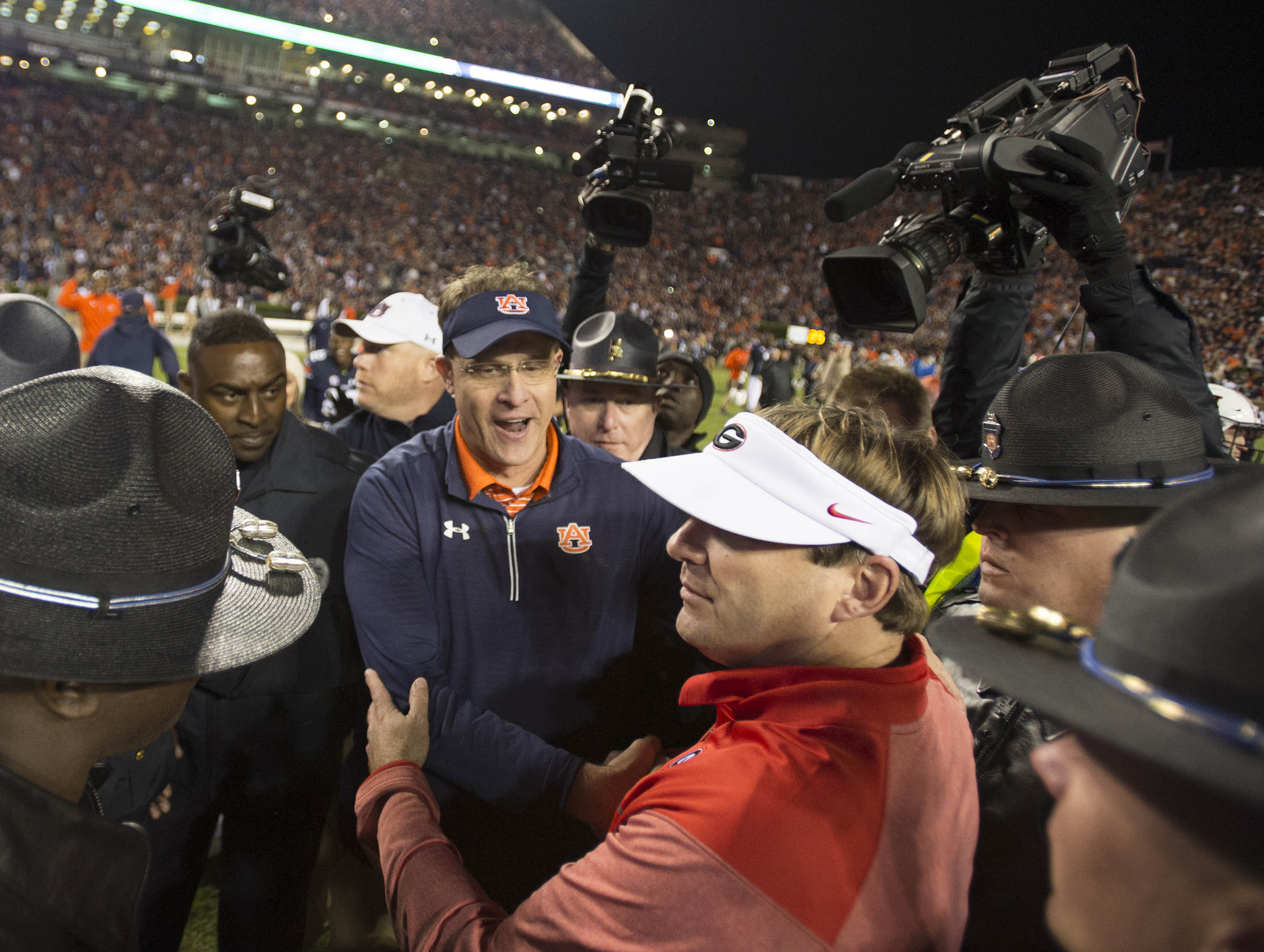 As I watched the 4th quarter of The Deep South's Oldest Rivalry, I couldn't help but think about the next time we play Auburn. It was not the way we lost, and it was not the fact that the Dawgs entered the game undefeated and ranked #1 in the country.

No, it was something else entirely that let this 121st edition make me all sorts of angry by the end.

But first, let's get some context.

While Auburn's biggest rival is clearly Alabama, the biggest pain in their rear end lately has been Georgia. What if I told you that since 2006 entering this season, Auburn beat Alabama twice as many times as they beat Georgia?

More importantly, Gus Malzahn entered Saturday's game with a 1-3 record against Georgia. His only win in 4 tries was a Hail Mary, facing 4th & 18 from his own 27-yard line with 36 seconds remaining in the game (Auburn's Nick Marshall, a former Bulldog, threw a miracle pass that was tipped by Georgia's Tray Matthews, a current Tiger, that will forever live in infamy in Athens).

Needless to say, this week was about as important as it could possibly be for Malzahn. Imagine this: you're ranked #10 in the country, playing at home, facing the #1 team in the country, a rivalry game, against a team your program has lost 9 of the last 11 against (including your 1-3 record as Head Coach). Malzahn needed this one. Bad.

This year's meeting, #1 on the road at #10, was perhaps the biggest and highest-profile Georgia-Auburn game since 2004. And it presented an opportunity for each coach involved, though in different ways.

On Tuesday of game week, AL.com ran a story, "Why Auburn wasn't going to hire Kirby Smart over Gus Malzahn." It is worth the read if you have time, but there was some very interesting information about Auburn's coaching search in 2012, and its relationship to Saturday's game:

Malzahn, despite winning an SEC championship and playing for a national title quicker than Smart or Saban, has come back to earth as Five-Loss Gus. In his fifth season, he's two wins away from the SEC Championship Game - or perhaps two losses away from the end of his tenure (emphasis added).

Look at the facts alone, and it's tempting to say Auburn made a mistake when it chose Malzahn over Smart. The truth is more elusive.

The story goes on to describe what were the big reasons why Auburn chose Malzahn over Smart:

But as all things Georgia-Auburn seem to forever be, there was a twist. Former Auburn head coach and longtime influential voice, Pat Dye, preferred Smart over Malzahn. "Three years later when [Mark] Richt was let go, Smart landed at Georgia. As Auburn feared he would."

In other words, this game was as pivotal as pivotal could be for Gus Malzahn and his future on the plains.

The Deep South's Oldest Rivalry doesn't need subplots as a selling point, but this year, it has more than usual. It includes the head coaches, who are opposites in so many ways.

It's the former defensive wizard vs. the former offensive genius. It's one coach whose supporters think the sky's the limit against a coach who gives his fan base reasons to hope and despair on a regular basis.

The man Auburn didn't hire meets the man it did for the second time with stakes that don't get much higher.

Right now, the score on the field is Smart 1, Malzahn 0. No matter what happened five years ago, it's critical for Malzahn to even that score.

This was not the only story this week about the two head coaches and the Auburn coaching search of 2012. ESPN's Chris Low, in a profile piece on Smart, had several interesting quotes from Kirby Smart himself. Before we read those, imagine for a moment that you are Gus Malzahn as you read them.

"I promised [Saban] that I would stay on at Alabama to coach through the national championship game if I got the job," Smart told ESPN. "It was important to me to finish what I started."

"The others on the search committee [Bo Jackson and Pat Sullivan] were good with it, I think, but I don’t think [Auburn Athletic Director] Jay [Jacobs] could ever get past the thought of the Auburn coach coaching at Alabama for another month and all that went into that," Smart said. "I get that, and the truth is it worked out the way it was supposed to. My experience is that it usually does."

If I'm Gus Malzahn reading that, what I'm hearing from Kirby is that he could, or maybe should, have gotten the Auburn job - but for his commitment to Alabama and Saban. I certainly don't think Kirby intended it that way, but in being so open to talk about his interview process with Auburn in 2012, Kirby's comments probably rubbed Malzahn the wrong way.

This is where the shenanigans started. The game had been well in hand already for some time. When Kerryon Johnson took Jarrett Stidham's throwback pass 55 yards to the house to put Auburn up 40-10 with 6:13 to go, some of you may have even turned off the TV.

But it's important you know what Malzahn did from that point forward.

On Georgia's ensuing drive, Jake Fromm completed a pass to Terry Godwin on 4th & 7 for a first down. Malzahn challenged the spot. Up 30. At home. With 3:27 to play.

This is where I started laughing. The first stage of grief is denial, and I honestly couldn't believe what I was watching and hearing: Auburn football players dancing to Soulja Boy. Then I advanced into stage 2: anger.

For those of you who missed it, or are too young to remember, here's what happened almost 10 years ago to the day during the Georgia-Auburn game in 2007: Georgia stomped Auburn, 45-20, and danced to Soulja Boy on the sideline.

On Saturday, Auburn trolled Georgia in a big way, dancing to the very same song. This may not seem like a big deal to you, but I promise you this is and will become an even bigger deal the next time we play. The only funny part is - it took Auburn 10 years to be up by enough points at home against us to be comfortable doing it.

This is when I realized Malzahn was actually making a mistake. In games like this, you don't do crap like that. Unless you want to get whipped the next time you play the same opponent.

I promise you these items (challenged spot, dancing to Soulja Boy, and the last pass play) will be used as motivational tools for Georgia's next meeting against Auburn.

#4 - CBS Interview on the Field

Just like Kirby didn't intend to sound like he could have been hired over Gus in 2012, Malzahn may not have intended to sound arrogant in his post-game interview on the field. But if you have the tape, or recorded it on your DVR, please just watch it again.

He was being interviewed maybe 20 seconds after the final whistle, and already knew that "Georgia, what - they're real good at rushing, right? And we held them to 46 yards."

Yes, he said that. Here is the story and video. What coach, in their right mind, says that in such a public setting with cameras, microphones, cell phones, audio recorders, and media members literally everywhere around him?

It's less than 5 seconds after the CBS interview. Did he think nobody would hear him? To me, this only goes to show how much importance he personally placed on this game. He knew he needed this one badly, and it showed in Auburn's performance.

"One of the best teams in America, and we beat them soundly." End quote. Emphasis added. That was the end of his answer to the first question of the press conference.

On his offensive line: "They imposed their will on them in the second half". While true, it's strange to hear that. Maybe I'm used to Mark Richt, where you simply complement the other team and are thankful for the victory. But I found Malzahn's demeanor and language to be almost combative.

I can't wait to play Auburn again, and I think Kirby and this team can't wait either. In fact, despite how "soundly" and "handily" they "imposed their will" on us, I'm hoping that we see this team sooner rather than later.

I hope Auburn beats Alabama. I hope we play Auburn again in the SEC Championship Game. I don't know if Georgia will wear black jerseys for a Blackout in Mercedes-Benz Stadium or not. I do know that if we play Auburn in Atlanta for the SEC crown and a trip to the College Football Playoff, I'll be wearing a black shirt with a G on it.

But assuming Alabama wins the Iron bowl in 2 weeks, please mark your calendars for Saturday, November 10th, 2018. I expect every Dawg to wear black and "Blackout" Sanford Stadium again. The Georgia players should be wearing black jerseys again too. Only this time, it will be Auburn's funeral.

Go Dawgs! Please let me know what you think in the comments, and vote in the poll below.

Who do you hope Georgia plays in the SEC Championship?