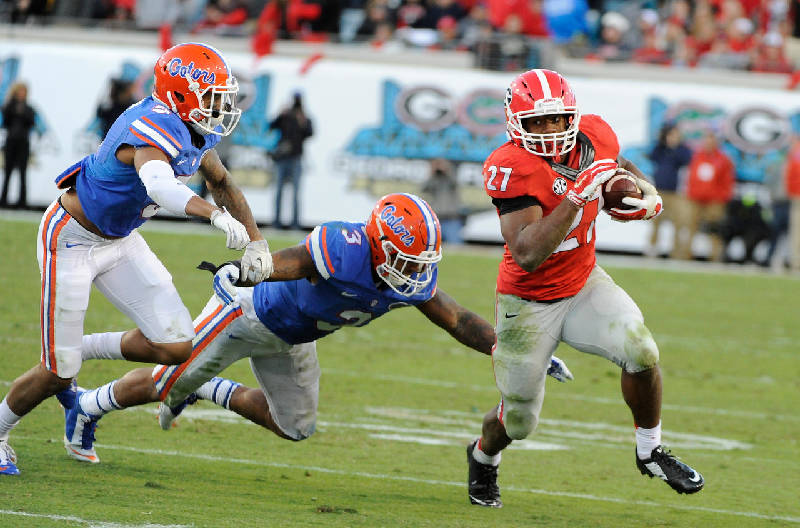 I wrote about this back in June, but my feelings remain the same: Georgia has to win this game. There are many reasons why the 96th edition of the World's Largest Outdoor Cocktail Party is a must-win for the Dawgs this season. But here are what I see as the five biggest reasons, in no particular order.

In the last 27 years, since 1990, here are a few facts that should alarm Dawg fans everywhere.

For the last 27 years, things have been bad for Georgia against Florida not just in Jacksonville, but on the conference and national stages as well.

All three of those disparities are unacceptable, but perhaps the most troubling is the number of conference championships. The Gators have 4 times as many SEC titles in this time span, while the Dawgs have only won the SEC twice during these last 27 years (in 2002 and 2005).

Kirby Smart is currently 0-1 against Florida. The reason Mark Richt is no longer in Athens is because of this game in Jacksonville. You can say it was due to the lack of conference championships, letting the division get away, or not winning the "big games". That is code for not beating Florida. Losing this game directly impacts your team's ability to win the East, win the SEC, and compete for national championships. Richt's 27-3 loss in 2015, his 10th loss in 15 tries against the Gators, sealed his fate.

In order for Kirby Smart to be "successful" in 2017, it's my opinion that he needs to win this game more than any other on the schedule. He has changed the culture of this program already. But the next step is taking control of this rivalry. Then Kirby can be Georgia's Spurrier - and start a new era for this rivalry, one that flips the table and sees the Dawgs looking forward to Jacksonville each year to beat the Gators regularly.

Since 2006, for the last 11 seasons, the loser of the Cocktail Party has never won the East.

Somehow - during the longest stretch of mediocrity for the Eastern division in recent memory - the Bulldogs have failed to seize control of the East.

The ridiculousness has to stop now. No longer can we afford to not take control of this division. Florida and Tennessee are light-years away from where they were as programs from the days of Steve Spurrier, Phillip Fulmer, and Urban Meyer. And Kentucky and South Carolina, though stabilized, are still significantly behind Georgia in terms of talent and recruiting.

There are no excuses this year to not beat Florida. With the deepest backfield in the country (Chubb, Michel, Swift, Holyfield, Herrien), a talented QB with 7 wins under his belt (Fromm), experienced and elite talent on defense (Dominick Sanders, Lorenzo Carter, Davin Bellamy, Trenton Thompson, Roquan Smith) and athletes and depth all over the field, there is no reason why Georgia should lose this game.

GEORGIA MUST BEAT FLORIDA ON SATURDAY. Period.
Please let me know your thoughts in the comments, and vote in the poll below. And GO DAWGS!

Is the game against Florida on Saturday a "must-win" for the Dawgs?