You're On Notice, Dawg! Week 3

After a cupcake-filled weekend in which playing no one was almost as helpful as the teams most of the SEC played (including Ole Miss), it's time for the Georgia Bulldogs to get back to work.

Share All sharing options for: You're On Notice, Dawg! Week 3

Welcome back to game week, Dawg fans! The unbridled enthusiasm after our beatdown of the Clemson Tigers has finally settled down, and now it's time to go back to wringing our hands in worry and despair as we contemplate the upcoming week of Georgia football. (Well, it's time for me to do that, anyway.)

This week's foe is the South Carolina Gamecocks. You might remember them from such games as the 52-28 beatdown delivered by Texas A&M on opening night, or possibly from their 33-23 victory yesterday over the East Carolina Pirates, in which the final score was not indicative of the fact that they put the Pirates away in the 3rd quarter and iced the game with a ten-and-a-half minute 86-yard drive that consumed most of the 4th quarter. As you also might know, they tend to consider UGA their top SEC rival, even though they're no better than third on our list of conference grudge matches, so there's quite a bit of motivation for the Palmetto State Poultry coming into this game.

This game will be both the SEC opener and the first road game of the season for the Dawgs, and we've got several points of concern that need to be addressed, most of which could easily have been glossed over by the big win two Saturdays ago.  So, I'm letting the following people, places, and things know that, for Week 3, You're On Notice, Dawg! 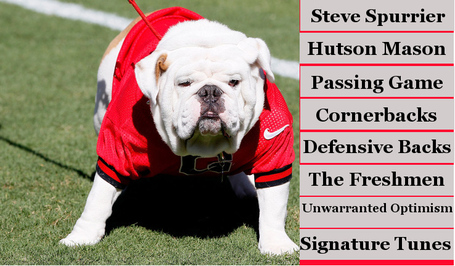 1) Steve Spurrier - Why Steve Spurrier? Because he hates us, we hate him, and because I have it from a very authoritative source inside the South Carolina administration that he's been intentionally sandbagging in their first two games.  He's been hiding both the fact that Mike Davis is completely healthy and the fact that Dylan Thompson is just Connor Shaw wearing a wig.  (Google a picture of Dylan Thompson and a picture of Connor Shaw and you'll get the joke.)

2) Hutson Mason - Lost in all the hype from the offensive explosion against Clemson was the realization that Hutson Mason just didn't have much to do with it. He never botched a handoff and didn't throw any interceptions, but he also failed to see a wide open downfield receiver at least 4 times, by my count, in that game. He also literally had a play where he just flat-out dropped the ball at our own 35 yard line.  We were lucky that the ball fell close enough to him that he could simply jump on it and save the possession, but it occurred when the score was still just 24-21. That could have been a game-changing error.

This will be Mason's first game starting in a true road environment (casts trollgaze towards Atlanta), and for us to have any reasonable chance of success, we're going to need Mason to stay composed and make at least a few plays in crucial situations. I'm not saying that he can't do it on the road in a hostile SEC stadium... I'm just saying we haven't seen him do that yet.

3) The passing game in general - In their first two games, South Carolina's defense has actually performed reasonably well against the run, but has been very weak against a good passing attack.  (They've averaged giving up 416 yards/game in the air vs. just 150 yards/game on the ground.) To win this game, we're going to need a downfield passing threat, and we haven't yet proven that we have such a threat.

Even though we're missing Malcolm Mitchell and (probably) Justin Scott-Wesley, we do still have some receivers that were good targets last year.  Chris Conley and Michael Bennett are probably the two best receivers on the field, followed by Reggie Davis and Jonathon Rumph, probably.  And let's not forget the tight ends, with Jay Rome probably being our best option there.  (Random side thought: Whatever happened to "Keep Calm and Quayvon?" Hicks actually ran the ball twice late in the game last week, but other than that he has completely disappeared since his Freshman year.)

Unless my memory fails me (and it might), I don't recall our offense even throwing the ball longer than 15 yards in the first game. We dinked and dunked around the line of scrimmage, using short wide-field passing to help open up holes for our running backs. (And for the record, I don't know why that would work, since the point is to stretch the field vertically, right? But I'm admittedly not an X's and O's guy, so if anyone has an answer to this question, I'd like to hear it.)  That's not going to work this Saturday.  We're going to be playing a team that is designed for us to line up and run against it.  If we don't find a downfield passing game, we're going to be in trouble.

4) Our Cornerbacks - Dear lord, y'all. Rewatching that Clemson game was absolutely painful in the first half, even though I knew how it was going to turn out.  We managed to bottle up the Tigers' running and lateral passing game relatively well, but then their QB would see a man-to-man coverage on a blitz... and welp, they just scored another touchdown.  And it wasn't necessarily an issue of being out of position, unless you count "lining up at the line but being too slow to keep up with the receiver" as being out of position. We just didn't have the speed to keep up with Clemson's receivers.

This is why it's even more baffling that after Cole Stoudt's first interception, the Clemson OC apparently decided to abandon the long ball altogether.  Your QB makes one mistake, so you trash the strategy that got you 21 points? That's green notebook-esque.

Unfortunately, South Carolina's Dylan Thompson has shown that he can, indeed, toss the deep ball. He's averaged 7.8 yards per attempt in Carolina's first 2 games, and has 7 completions of 25+ yards in that time (and 14 completions of 15+ yards).  When combined with the running threat Mike Davis represents... dang, I'm getting nauseous just thinking about it.

They say that your team's greatest improvements come between your first and second game of the season.  For us to corral the South Carolina offense on Saturday night, this statement will have to be true of our cornerbacks.

5) Our Defensive Backs -  Everything I said about the cornerbacks?  Yep, that goes for the DB's, too.

6) All of the Freshmen on the team - Unlike some football teams, we're not built entirely around a base of young, inexperienced players.  We did have a lot of Freshmen get a lot of playing time in our first game, though.  Sony Michel, Nick Chubb, Isaiah McKenzie, Jeb Blazevich, Lorenzo Carter, and Dominick Sanders all saw significant action against Clemson. And let's not forget Aaron Davis with his INT, though he's a Redshirt Freshman.

These freshmen contributors have proven that they can perform well against a strong opponent within the friendly confines of Sanford Stadium, but none of them have yet experienced what it's like to be standing on the field with a hostile SEC crowd in the stands. When, on offense, the crowd is roaring so loud that you can barely think, let alone hear anything the quarterback is saying. And when, on defense, the crowd roars and taunts you mercilessly every time you make the smallest error.

On the road in the SEC, when things start going south, the psychological aspect that the crowd brings can start making it really go south on you in a hurry if you aren't careful.  And it's a guarantee that you'll see at least some kind of adversity that could cost you the game.  These freshmen haven't seen that yet, and we don't know how they'll react. For us to have a successful result against the Gamecocks, however, we'll need at least some of them to come up big in those situations.

7) Unwarranted optimism - As I said in the first "on notice" article of the year, I have no hope for this season.  Even after a convincing win over our #1 rival in the state of South Carolina in our first game, I still don't yet find sufficient reason to hope. We've got what is possibly the best backfield in the nation, but we don't know if we have any passing game to speak of.  And while the offensive line performed well against the Fort Hill Felines, they were madly inconsistent last year.  We don't yet know if they will continue their generally schizophrenic performance or not in 2014. And as I mentioned above, our defensive backfield got absolutely blasted in the first quarter and a half, before Clemson inexplicably decided that this whole "throwing the ball a long way down the field" thing wasn't for them.  Some fans want to talk about a SEC or national championship at this stage.  Me?  Sheesh, I'm still worried about whether or not we can avoid getting blown out in both the crappy Columbia (SC) and the good Columbia (MO).

After one game, there is still no cause for optimism.  Despair and depression are still the only things that await us on this long trudge through the college football season.  In exactly 7 days, I might have a different opinion.  But don't count on it.

8) Claiming songs that have no natural connotation with your program as your "signature tune." - You gotta be careful what you choose as your "stadium atmosphere" thing, folks. Because if you choose a catchy modern techno anthem as "your thing," then bad things can happen when you get beat down at home by a double-digit underdog:

I wouldn't mind seeing a reprise of that photoshop (videoshop?) on Saturday night. Of course, I'm not optimistic that we will see that. South Carolina isn't a terrible team, and they've got a fully operational Mike Davis, which helps to balance their offensive attack and makes them very dangerous. Their defense is strong against the run and weak against the pass, which matches up very well with our offense, which is weak on passing but strong on running. (It's also worth noting that their first two opponents were exactly the opposite... weak on running and strong on passing.)

I'm as nervous as a long-tailed cat in a room full of rocking chairs about this game. We don't have a great track record in Columbia, even when we end up winning. Also, when Steve Spurrier is a solid underdog at home, he's usually got you exactly where he wants you.  On top of it all, this will be CBS' first SEC football game of the year, so we'll be kicking off at the premier 3:30 PM time, which will provide some extra juice in the atmosphere at Williams-Brice Stadium.

I probably won't sit down at all on Saturday.  I'll be standing there in front of my TV, pacing around, yelling at the screen, and muttering to myself... and then we'll arrive at kickoff time.  I just don't know, Dawg fans.  This situation just doesn't stack up well for us.  Are the 2014 Georgia Bulldogs good enough to go into Williams-Brice Stadium and come out with a win against a Steve-Spurrier-coached squad with its back against the wall?  I guess we'll find out in 6 days.  Until then...