A Sneak Peek Inside the SEC Network, Part II

We continue our preview of the SEC Network, which launches on August 14, with a look at some of the new graphics and an overview of some of the behind-the-scenes work that has gone into preparing the infrastructure for the rollout.

Share All sharing options for: A Sneak Peek Inside the SEC Network, Part II

In my first installment in this series, I recounted some of my experiences during the SEC Network media open house day in Charlotte on August 6, along with a few descriptions of some of the content we can expect to see in the first few weeks and beyond. In Part II, I'm going to spend some time talking about the new graphics created by the SECN team, along with the significant investment in infrastructure that has gone into building the distribution model the SEC network will employ. In part III, which should come along on Saturday, I'll recount some of the interesting conversations I had with some of the on-air talent and executives at the SEC Network, including UGA alumna Maria Taylor, Tim Tebow, Marcus Spears, Paul Finebaum, and others.

To start off, I'm going to share some of the new graphics that the team at the SEC Network has created in advance of the network launch.  I, personally, was impressed at the amount of work and thought that was placed into something that many folks will probably barely glance at as it flies across their screens before a program. Every team has their own custom 15-second animation, and in creating those graphics, the ESPN team worked closely with each university's athletics department to make sure that some of the most important traditions and sports programs at the school were represented.  For example, here is Georgia's spot:

(Apologies for the autoplay.) There's a lot that goes by pretty quickly in that 15-second spot, but here's a still image of the final frame (click to embiggen): 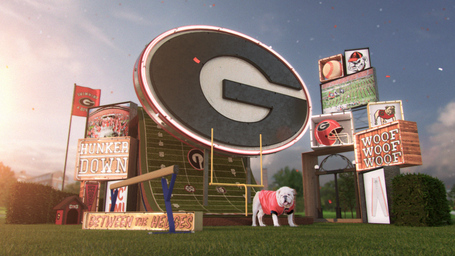 Here's a list of what I saw in the image (starting from left to right)... let me know if you see anything I missed!
- The Hedges
- MLC/Tate II
- A banner that says "Swimming and Diving"
- Uga's doghouse
- A picture of the Dawgs running out of the tunnel by the Uga statue before a game
- "Hunker Down"
- A "Georgia" pennant next to a partially-hidden sign that says "Sic 'em!"
- A sign that says "Between the Hedges"
- A balance beam straddling that sign
- A football field with a huge crown that would be a great ski slope if it were covered in snow, with a big-ass "Georgia G" sticking out of it.
- Uga
- The Arch
- A UGA football helmet
- A picture of the cheerleaders and Redcoat Band at the beginning of the pregame run-out
- A baseball sitting next to an old-style Bulldog head logo (I LOVE that this is included, and not that newfangled Bulldog/child thing they're using.)
- A really old-style full-Bulldog logo with the "block G" on it
- "Woof Woof Woof"
- A pair of silver britches.
- More hedges

As I said before, it's one of those things that the average viewer will probably spend 3 seconds looking at, and I'm impressed that they put so much effort and research (and collaboration with the University) into getting so many of the details absolutely right.  (Though I anticipate Mr. Sanchez and/or Kris Willis are getting ready to complain about the lack of a basketball in 3... 2... 1...)

There are similar animations for each school, and all are pretty impressive.  The one that falls the most short, in my opinion, however, is the one for Auburn: 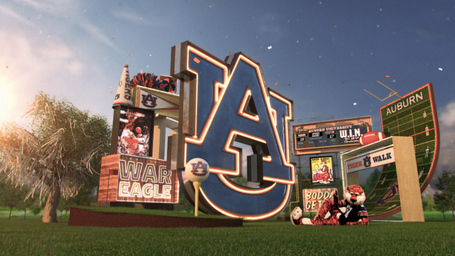 I mean, there's far too little toilet paper (it should be covering EVERYTHING, obviously), and there's not even one barely-concealed bag of money. I've complained to the league office... and as they say, it's an ongoing investigation. (/rimshot)  I forgive all of those shortcomings, however, because in the official media kit we were given, the name of this file was "Aubrun.jpg."  I give the SECN office +2 points for the subtle trolling and following the "Aubies can't spell" meme, but I also have to take away a point for not sticking with the standard "Abuurn" style.

In all seriousness, though, if you have a few minutes, check out the animations for all 14 teams.  You can find the links for each team at this site.  Just open each link in a new window and you'll get 'em all. Here are a few highlights of what stood out to me from these animations:
- A picture of Harry Truman in Mizzou's shot. And a sign that just says "Homecoming."
- A "Why did the chicken cross the (rail)road" joke BUILT RIGHT INTO the shot for South Carolina
- The tribute to Chucky Mullins in the Ole Miss shot
- Why does Florida get a blimp?
- Kentucky's shot has, I think, exactly two things related to football in it... and they're just a helmet and a football.

The school-specific animations aren't the only cool things the SEC Network has come up with to give each school their own little touch, though I believe those are the only items currently publicly available.  During one of the sessions, the network execs played a few additional "teaser" items for the crowd that are tributes to some of the cheers that are specific to each school.  "Woooo Pig Sooie" for Arkansas, "Goooooo Dawgs Sic 'em" for UGA, and so forth.  My only disappointment was that they cleaned up the "Hotty Toddy" cheer for Ole Miss, but hey, we're living in an FCC-patrolled world, so some compromises had to be made.  (Still, though... "Ole Miss Yes Ma'am!" just doesn't sound right.)

In addition to the cool new graphics, I'm also going to spend a little bit of time touching on the actual content creation model that the SEC Network is using.  In previous years, if ESPNU was going to be showing a UGA gymnastics match or a baseball game, they'd truck in the ESPNU cameras and control truck(s), set them up with their people, and do the entire production on site, beaming the signal directly back to the ESPNU headquarters. More often, though, what you'd get for Gym Dogs meets, softball games, and soccer matches was a single-camera online feed that was, more often than not, pretty spotty. The way it's going to work under the SEC Network model, however, is completely different, far more decentralized, and (ostensibly) will have far more consistent production values.

For all content that's going to be on the SEC Network (not including football games or events that are directly broadcast by one of the ESPN networks or ABC), the schools themselves will be in charge of producing the entire event.  This covers everything from soup to nuts, including the cameras, production teams, and even hiring their own broadcasters for the events. The challenge with this is that the SEC Network still wants all of the events to have a similar style (the same "look and feel"), and they don't want the production values to drop off significantly just because an event is being held at one campus vs. another. As a result, the Network has been taking several steps to help all SEC schools bring their facilities up to the standards that ESPN expects to provide.  Among those steps:

The SECN team quietly started some of the production "dress rehearsal" work last spring with some college softball and baseball games that were broadcast (streamed) on ESPN3.  The officials didn't say which games those were (and I don't know if it would be possible to go back and check, anyway), but they said they were very satisfied with the results.

This also brings up another interesting point about the content delivery model of the SEC Network:  it won't just be limited to the TV channel, but will also be delivered online ("digitally," in PR parlance) for many events. For example, if UGA, Alabama, and LSU are all starting a home baseball game at the same time on the same day, the SEC Network TV channel might be showing the LSU game, but you can go online to the SEC Network's website and stream either of the other two games, and the quality of those streams should be significantly similar to what you'd be seeing if they were on TV.  (I know this has been a major issue many people have had with ESPN3, that the production values of some ESPN3 events were absolutely terrible compared to what you'd get on the TV networks.  The goal of the SECN team is to provide the same quality across both the online medium and the TV medium.)

I would be remiss, however, if I didn't mention one of the potential drawbacks to this approach. One of the key items the SEC Network officials mentioned they were looking for the schools to implement is to avoid creating a "homer" environment in their broadcasts.  So, for instance, you can't focus just on the home team in your camera shots, and (most notably) the announcers the school hires to call the event are not allowed to be "homer" announcers. This means, for example, that if you've gotten used to hearing Kevin Copp have an on-air meltdown every time the Gym Dogs stick a routine, you won't be hearing that anymore.  (Though I do hope Copp gets a role with some UGA broadcasts.  I think he's done a great job with UGA over the past few years in their online events.)  This also means you probably won't be hearing Jeff Dantzler doing baseball or women's basketball games on the SEC Network... I don't know if it would be possible for him to avoid being a UGA homer.

This might be rather banal stuff to some people, but I found it very intriguing (and impressive) that ESPN has spent so much time and effort in literally bringing every SEC campus into the 21st century in terms of production facilities and training.

As I write these posts, I realize that it might seem like I'm kind of shilling for ESPN and the SEC Network, but if you follow the writing I've done at Dawg Sports over the years, you know I don't shill for anybody.  (Quite the opposite, in fact.)  And I'll be the first person to say that all these intentions are great, but the proof will be in the pudding once the Network gets going. I can't help but acknowledge, though, the extreme amount of work that has been put into every aspect of the SEC Network. The goal of the ESPN team has very clearly been to make the SEC Network the premier conference TV network, and one that intentionally and specifically reaches out to the fans. I think that characteristic, more than anything else, could be one of the biggest selling points for the Network, if they are successful in translating their efforts behind the scenes into the on-air product.

That's all for this entry!  Tomorrow, in Part III, which I believe should be the final segment, I'll be sharing the thoughts I gathered from various SEC Network personalities about their roles and the network itself.  Until then...