A Sneak Peek Inside the SEC Network, Part I

On Wednesday, ESPN invited members of the media to come and check out a "Behind the Scenes" look at the new SEC Network as they get ready to go live on August 14. Calling their setup "impressive" barely scratches the surface.

Share All sharing options for: A Sneak Peek Inside the SEC Network, Part I

As I got in my car and took the "short" three-and-a-half hour drive from my home in the Athens area to Charlotte, NC, I was starting to wonder if this trip was going to be worth it.  I had been intending to spend this entire week unplugged from the world while at the beach in Daytona, and vacation time from my "real job" is a precious thing that doesn't come along too often. Plus, I had to expend some significant "marital capital," if you know what I mean, to come home after just a few days so I could drive back and forth from North Carolina for what, for all I knew, could end up being a glorified guided tour of a TV studio.

Thankfully, all of my fears were put to rest very early. I pulled into the ESPN complex (and their Charlotte facilities are  very accurately termed a "complex"), and was greeted with this sight: 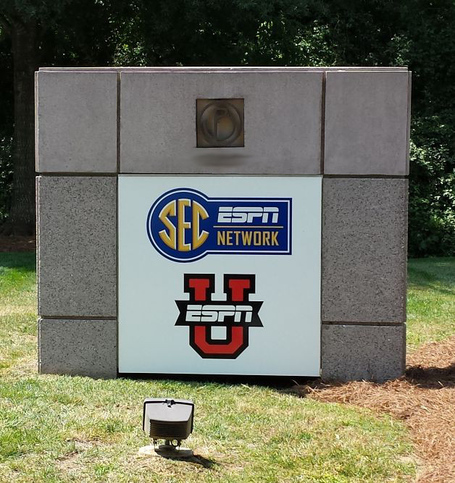 I don't know about you, but that alone was enough to get my blood pumping in earnest. Then, upon entering the doors to the building where the network is located, I was greeted with the sign that REALLY drives home the fact that this thing is real, and it's coming very soon:

A notable start, indeed... but one of the most important questions of the SEC Network's partisanship was answered with the first event: the BBQ luncheon.  I'm happy to say that at the SEC Network, their "official BBQ" of the BBQ luncheon was pulled pork, and it was absolutely legit. It appeared to have been freshly pulled, and some of it was still in fall-apart-tender chunks that still had bark attached. No sauce was needed for this BBQ (for purists), though they were somewhat ecumenical in offering fare to accommodate all 3 denominations of sauce believers: a vinegar-based sauce, a mustard-based sauce, and a sweet-and-spicy red sauce. (White-sauce heretics need not apply, apparently... a position with which I have no argument.) Gracie Blackburn from the ESPN PR staff captured this picture of the ESPN cafe in Charlotte, which is somewhat smaller than the Bristol cafe that we've seen on SportsCenter commercials.  (But, no doubt, the BBQ is far better here, which is what really matters.)

Once the action really got started after lunch, it was difficult to avoid the sea of superlative terms that both SEC Network executives and the on-air talent themselves kept using to describe all of the work that's gone into making the SEC Network reflect the quality of the SEC itself:  the best in the nation.

I'm still working on transcribing all of my interviews, and I'll post more about the discussions I had with the various departments and personalities in Part II of this series.  I'll tell you now, though, that Marcus Spears is the largest human being I've ever seen, and he has a gregarious personality to match.  (I'm not a small man, and he dwarfs me.  The difference is that he's in NFL-defensive-end shape, and I'm a gelatinous blob. Seeing him and Paul Finebaum together is like looking at Rocky and Bullwinkle standing next to each other.  Or Snarf and Lion-O.  Except that Snarf is bald.  You know, this analogy sounded better in my head.  Moving on...)

With the addition over the past week of DirecTV and Charter cable, the SEC Network, at its launch, will be available in over 91 million homes.  That will be one of the largest, if not the largest, cable channel launch of all time, and the SEC Network team is poised to capitalize on that big bang from the very beginning.

On the launch night of August 14, the first show on the network will be a 3-hour version of SEC Now, the daily show hosted by Dari Nowkhah and UGA alumna Maria Taylor.   After that, a new "SEC:Storied" documentary will be premiered, covering the passionate fanbases of all 14 SEC teams.  Over the first two weeks leading up to the season opener, all 14 SEC teams will get their turn in the spotlight, with the following features for each team over that time:

And that's just the first 2 weeks... merely the appetizer. As you can see (and as was repeatedly stated to us during the day), the SEC Network will not be the "Alabama and Florida" network or "just the big boys" network.  The team at SECN are committed to covering all 14 schools, and their lineup over the first two weeks is a significant statement of those intentions. There's quite a bit of great Georgia Bulldogs content there, and heck, if I'm honest, I'll probably be watching that SEC Storied documentary on Spurrier, too.  (And I'll probably still be cursing under my breath when they inevitably show a shot of him running up the score in Sanford Stadium "just because nobody had ever scored 50 there before.")  After the football season starts, every SEC team will be playing on the SEC Network at least once in the first 4 weeks of the season. (Georgia's first turn on SECN will be the 8/20 game against Troy, which kicks off at noon.)

Here are a few other little tidbits that I found impressive about the SEC Network:

- The SEC Network's studio sets are a combined 2,800 square feet.
- ESPN’s Charlotte Production Building houses more than 4,700 cables stretching to a length of 50 miles (more than 880 football fields).
- It takes approximately 23,400 miles of fiber optic cable (nearly the circumference of the earth) to connect all 14 SEC campuses with the SEC Network.
- 96 newly connected sports venues
- On average, 3.95 miles of cable was laid at each campus.
- 10 newly constructed control rooms

Those last few stats highlight another feature of the SEC Network that I hadn't realized until today:  While the spotlight of the SEC Network will undoubtedly be at the top with the shows I mentioned, the event coverage model is actually very decentralized, focusing more on creating production centers at each individual campus.  But I'll have more about that in my next installment.

For now, I'll conclude by saying that I was very impressed by the breadth and depth of expertise and knowledge I found at the SEC Network HQ in Charlotte. This thing is going to be real, and it's going to be spectacular. If the previews are any indication, it's going to be just like the product the SEC puts on the field: superior to everybody else's offering in almost every way.