There ain't nothing like being a Georgia Bulldog on Saturday night (and Sunday morning) after a Georgia victory.

Share All sharing options for: You're (Not) On Notice, Dawg! Week 2

Now that game was what I'm talking about, Dawg fans.  We, of course, love it when we have any kind of success, but let's be honest: the game we witnessed last night is what Georgia fans really love to see the most. Running the ball down our opponents' throats at will (eventually), throwing the ball grudgingly and only when absolutely required, and wearing our opponents down so much in the 4th quarter that they look like a I-AA team trying to defend us... that's classic Georgia Bulldogs football.

After such a top-notch performance, and in consideration of the fact that we have a bye week this week, I'm going to exercise my option to celebrate a little this week and let the following people, places, and things know that, for Week 2, You're (Not) On Notice, Dawg! 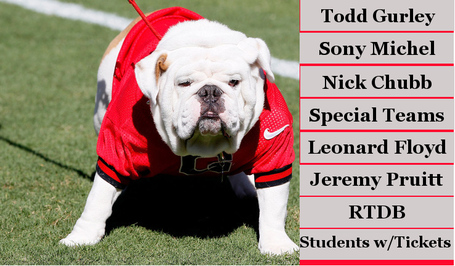 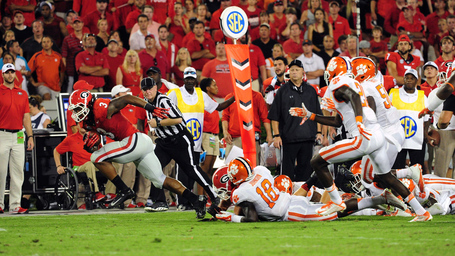 2) Sony Michel - My god, a freshman!  Michel looked... well, like a freshman at times during this game, but he put in a very solid performance in the "Keep Gurley Fresh For the Fourth Quarter" project that we were running on Saturday.  Overall, in the game, Michel had 6 carries for 33 yards, 3 receptions for 20 yards, and even made 2 tackles on kickoff returns.  You can't make conclusions about your players after just one game, but it's hard to have imagined Sony Michel having a better start to his Bulldog career than the one he had against Clemson. He featured prominently in our offense, and it's easy to imagine that he will continue doing so this year. 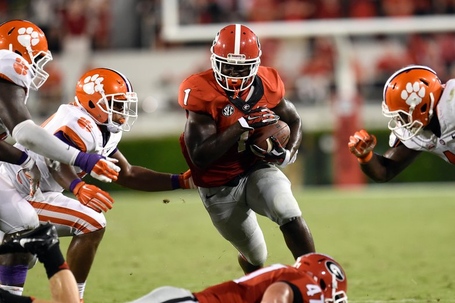 3) Nick Chubb - My god, another freshman! Chubb started slowly, but once the Clemson defense had been worn down in the 4th quarter, Chubb continue to press the issue, ripping off a beautiful 47-yard touchdown run to really put the game out of reach and extending the score to 38-21.

And let's not forget that play in the 3rd quarter where his helmet was yanked off (resulting in exactly NO penalty, for some reason), but Chubb just didn't care, fighting for extra yardage afterwards (even though it didn't count due to the rules change). I can't help but wonder if Chubb has already replaced Keith Marshall as #2 on the depth chart. 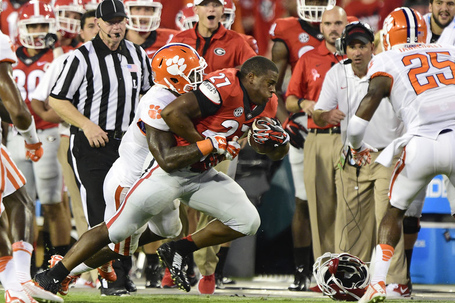 4) All of the Special Teams Squads - It's not hyperbole to say that, with the exception of field goal kicking, special teams as a whole were collectively the weakest area of our team last year.  Against Clemson, however, we won in every single aspect of the special teams game.  Our punts were all well-covered, and we easily won the field position game virtually all night long.  As for kickoffs, well... (see entry on Todd Gurley above). And we made every place kick that we attempted (FG and PAT's). In my opinion, however, the area in which we were most improved last night was on punt returns.  Instead of fair catching 90% of the balls sent our way (and only returning the other 10% for a yard or two), we actually started blocking for punt returns.  Reggie Davis made a couple of double-digit gains, and only had to fair-catch 2 balls, if I calculated correctly.

As always, it's impossible to make a season-long conclusion after just one game, but in this one game, our special teams were exceptional.  If we can keep up that effort, it'll continue making a big difference in games.

5) Leonard Floyd - Well, we have a #BEASTMODE guy on offense in Todd Gurley, and we had one on defense in this game, too, in Floyd.  He only got credited with 7 total tackles in the game (Amarlo Herrera had the team lead with 12), but Floyd wreaked havoc in the Clemson backfield the entire second half, including causing a fumble by Cole Stoudt late in the game. Floyd seemed to only get stronger as the game went on.  I love it. 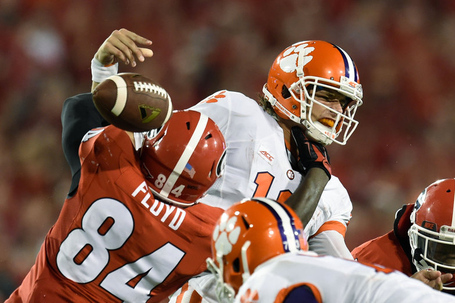 6) Jeremy Pruitt - I put Coach Pruitt on notice before this game, and in the first half, it looked like he might be on notice again for the next game.  I give our new defensive coordinator full marks, however, for making the adjustments we needed to make even before halftime.  Clemson's last score in the game came at the 7:28 mark in the 2nd quarter.  Our cornerbacks kept getting burned on 1:1 coverage, so Pruitt simply dialed up more zone coverage instead of man-to-man.  Also, our defensive line got some impressive pressure while we were still in that zone coverage, so that's a point in Pruitt's favor, as well.  The Georgia defense held Clemson's offense to about 15 total yards in the second half.  That, my friends, is the definition of a shut-down defense. We'll see if they can repeat the performance against what is sure to be a full-speed Mike Davis in our next game, but for now, I'm excited about this defensive squad.

7) RUN THE DANG BALL, BOBO -The game started out a little inauspiciously for the offense, but it wasn't really Mike Bobo's fault. I counted at least 4 open receivers that Hutson Mason just plain overlooked, so the plays weren't bad... he just couldn't find the open guy. Also, Bobo was caught on camera in the first quarter saying "PASS PASS PASS PASS PASS PASS PASS" into his headset, which, if I had been watching the game live on TV, would have likely caused me to pass out. #RunTheDangBallBobo

Even in those early series, though, we saw the offensive coordinator trying to find creative ways to give his running backs the ball in open space, which is a good thing. And as the game wore on, Bobo's obvious "save Todd Gurley for the fourth quarter" strategy certainly can't be faulted, given the results. (Of course, it doesn't hurt that we have 3 beasts behind Gurley that are completely capable of chalking up huge runs in their own right.)

I don't know if it's wise to save Todd Gurley for the 4th quarter in every game, but that's not likely to be the strategy he'll use for every game.  It won't be 93 degrees with 90% humidity at kickoff in too many more of our games, but that was the case on Saturday night. Keeping Gurley fresh was a smart move, and it paid off in spades.  Gotta credit the head offensive man for that one.

8) Students with Tickets - Words are not adequate to express how pleased I am with the student section for this game. Thanks to the Mayor Emeritus, Kyle Weblog, we can see that this is what the main student section looked like a full hour prior to kickoff: 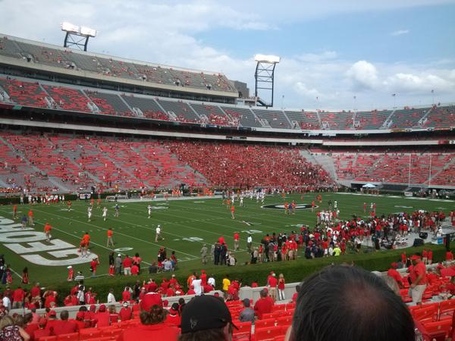 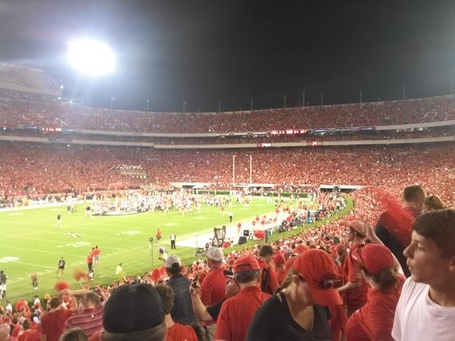 The student section was 100% full well before kickoff, and it was still 95% full when the clock read 0:00 and the game had been iced for at least half a quarter.  Not only that, but thanks in large part to the students, Sanford Stadium was absolutely raucous during the game.  During almost every defensive drive, it was loud. But on big defensive plays, it was deafening. Saturday night is a prime example of what Sanford Stadium should sound like very single week, and it's due in large part to the students showing up and giving their all, just like their fellow students on the field.  Magnificent work, folks.  Just magnificent.  You're officially "off notice" until further notice!

That's it for this week!  Enjoy the bye week, my friends, because our Bulldogs earned it on the field this week. Cheer for East Carolina whenever they play the Gamecocks on Saturday or Thursday or whatever.  (RedCrake knows all about that TV schedule.  I just follow along.) Laugh at Florida for not even being able to beat Idaho this week. (I hate Florida.)  And rest assured, I'll be back next Sunday with the appropriate amount of Munsonian pessimism as we get ready to take the field for our second game.  Until then...