Todd Gurley has all the headlines this morning - as well he should. He was magnificent. But the adjustments made in the second-half of last night's game are the best I've seen in at least a decade, and I'm so happy right now I may piddle.

Share All sharing options for: 15 Thoughts Wants to Welcome Defensive Football Back to the University of Georgia

Please forgive my absence from writing.  I was in Tibet, trying to cleanse my mind and soul from what I witnessed from last year's defensive effort, and rehab my ACL I blew out while watching the Tennessee game. I was a bit concerned during the first half of play, but something wondrous happened:  We adjusted.  And it never felt or looked so good.  Here is the inaugural "15 Thoughts" for the 2014 season.  There is no way I can possibly cover what I saw and what this game meant in a mere 15 points, but I'll try.  Nothing earth-shattering or groundbreaking here.  Just some observations by a lifelong fan.  It's Great to be a Georgia Bulldog!

1.  I want to congratulate Clemson on their effort.  They are a good team.  Clemson has some very good weapons on offense, are very sound defensively, and Gainesville High product Deshaun Watson, if he stays healthy, will lead the Tigers to an ACC Championship or two.

1a.  Having said that, I am glad we own the bragging rights because we might not play the Tigers again for a long, long time - unless we meet up in a playoff down the road (feels weird typing this).  I love beating Clemson. LOVE IT.  For the foreseeable future, the next time you see a Clemson fan, you can just knowingly nod with a little wry smile on your face.

I matriculated at Georgia from '80-'85 and experienced the golden era of this rivalry.  ESPN's "Voice of Reason" Rece Davis practically begged for this game to be played annually last night and I couldn't agree more.  Kyle King has another chapter to write and some sort of petition to start, I believe.

1b.  I do not want to see Ray Lewis in our stadium again.  Ever.

2.  From the vantage point of High-Def television, the crowd was amazing.  It was a beautiful thing to see.  This is important on a number of fronts:  First of all, it just looks damned impressive on television when the network suddenly cuts to a live, panoramic shot of our stadium bathed in a literal sea of red.  It sends a message of support that is palpable.  And there were about 30 or so very high-profile recruits - many of which are on the proverbial fence - about where to play their college ball in attendance.  If this is the one chance to make a lasting impression on future talent, I'd say it was a rousing success.  I totally get the late-arriving crowd thing for a 12:30 start against "Directional U."  Folks, there are only so many opportunities to watch a game like this in a lifetime.  If you have the chance to go, go early and be loud.  All of you in attendance did our school proud.

I definitely love the fans.. They had the stadium rockin!!

3.  Special Teams - in all phases - were simply outstanding.  Obviously, Todd Gurley's long kickoff return played a huge role in this game.  But Collin Barber was a punting wild man last night, averaging 45 yards (on 5 punts) and pinning Clemson deep in their own territory thus forcing the Tigers to protect the ball more than open up their playbook.  What a weapon.  Reggie Davis looked comfortable fielding punts.  Isaiah McKenzie - iMac - got a single opportunity to return a kick and nearly broke it, scampering for 24 exhilarating yards.  He's a natural in that role, folks.  Coach Mike Ekeler's boys were flying to the football on coverage.  Marshall Morgan hit his only opportunity of the night right betwixt the pipes.  Solid effort all 'round.

3a. Go ahead, admit it.  You are actually looking forward to seeing us return punts this season aren't you?  It's okay.  Really, it is.

4.  Our defense was never totally (Granthamesque) out of position in the first half of play, except on a few plays, notably a scramble by Cole Stoudt on the Tiger's opening drive - where we were in a dime package and the middle of the field was pretty much wide open.  Clemson made some plays with our guys in the vicinity.  I think this observation was pretty much spot on:

All of this is coachable...and might've been part of the second-half adjustments.  One pass for 15 yards of offense will attest to this. By my count, we forced nine "3 and outs" last night.  Wow. 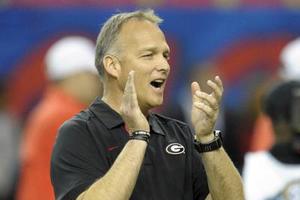 So this is what Coach Richt meant when he said, "Wow!"

5.  As MaconDawg alluded to at the beginning of last night's post, we had some tackling issues early that were "dealt with" at halftime.  I did not see any missed tackles once the 3rd quarter began, except for Clemson's lone first down.  Say that to yourself slowly:  A lone first down in a half.  Somewhere, Erk Russell is smiling, methinks.

6.  We were in so many different defensive packages last night, I lost count.  And to think it all came together in the second half.  If improvements are made between week 1 and week 2 along with a "bye" week, how good can this defense prove to be down the road?

7.  The "lighter is better" philosophy certainly paid dividends last night, on both sides of the line.  We were the stronger team as the hot night wore on.  Do we win this game last season?  Maybe, maybe not.  But 4th quarter football for a well-conditioned team should be fun football...and our boys were having some serious fun last night.

7a.  Speaking of hot night, I bet there were some beautiful girls walking around campus yesterday.  I miss college.  Never graduate...

7b.  Aaron Davis' pick was a thing of beauty.  Is he on scholarship yet?

8.  Leonard Floyd gonna get paid next year if he wants to.  Stay healthy.  Offensive coordinators are going to have some tough decisions to make on how to account for him.

9.  Tracy Rocker was giving young Lorenzo Carter some "advice" on a late hit that kept a Clemson drive alive in the 2nd quarter.  I believe he listened.  I believe if Tracy Rocker told me to walk in traffic, I'd be compelled to listen, too.  I also believe Carter will be great.

10.  I hope Jeremy Pruitt loves Athens...I mean, really, really loves it here.  I hope he becomes what Bud Foster is to Frank Beamer:  An Institution.

11.  Okay, I'm not going to mention the lack of touches for Gurley in the first half.  Not even going to give it a second thought.  Nope, just gonna let it slide on by...disappear into the humidity of late August.  Say nothing, act casual... 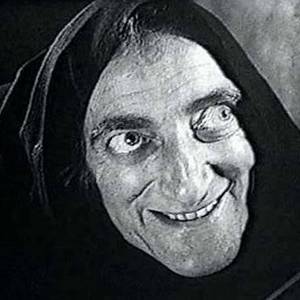 Todd Gurley with only 5 first half touches?  That's Abby Normal...

12.  Our offensive line gives me hope.  I think it can be very good.  John Theus, as alluded to in earlier posts & thoughts along the way, did a good job on Vic Beasley.  Greg Pyke is a stud, David Andrews is nasty.

13.  I don't think Hutson Mason was especially comfortable in the pocket tonight, and made some very wise running decisions.  I've got no problem with taking what you can get, when you can get it.  I am impressed with his decision making, and his only real gaffe of the night, when he fumbled, was probably due to a slick football that just popped out of his hand.  Our pass protection must improve, but I'm not going to be too harsh until we get Scott-Wesley back and perhaps more receiver rhythm.  Malcolm Mitchell would be gravy at this point, but I just don't feel too optimistic about seeing him again.  Anyway, Mason was solid and his numbers, though not spectacular, were fine.

14.  Okay, I coined it so I'm gonna say it again:  We've got the Four Dawgmen of the Apocalypse in the backfield.  Todd Gurley IS the best running back in America.  And he should get a minimum of 20 touches/game.  Sony Michel is not a finesse runner; on the contrary.  He's very fast and very strong.  Once he learns the playbook, he'll be exceptional - especially as a receiving option.  Nick Chubb is as advertised.  I could watch this over and over and over...

Keith Marshall got a little dinged up.  He's still an edge guy and on his few attempts was run into the line, which makes me feel a bit bad for him.  Not sure if Brendan Douglas got in the game or not.  Thing is, he's a very good back but we might have to find another role for him now.  What depth!

Anyway you slice it, we've got 1 Super Human back, and 3 (maybe 4) others that would be starting for 96.3% of the teams in the country right now.  It's a long season, and the spectre of injury always looms.  But what a wealth of talent and riches.  RTDB!

14a.  Kudos to #47, Taylor Maxey, from beautiful Bogart, GA!  He did a great job on a hot night.  Quayvon Hicks, when he got his shot, just plows over people.  Did we see him lined up at H-Back, or Tight End?  Didn't think I did.  Perhaps, we're saving something for 'Sakerlina in a few weeks.

14b.  We can impose our running will on every team on the schedule if we so choose.  This is better than great sex.

15.  Jay Rome and freshman Jeb Blazevich made the catches when given the opportunity.  We are thin at this position, but again, have options out of the backfield and whatever strange alchemy Mike Bobo is brewing with the hybrid sets.  Color me intrigued.

I cannot possibly write everything that needs to be written, so you have an open forum to chime in.  Last night was simply amazing, and it looked every bit as fun as coach Richt said in his post-game presser.