Brought to you by the Georgia Bulldogs, Georgia Southern Eagles, and Georgia State Panthers... who would like to take this opportunity to remind you that the Georgia Tech Yellow Jackets are well on their way to being the 4th best team in the State of Georgia.

All that said, thank God that the season is here!  I always know going into the long winter that I'll miss college football, but this year has seemed especially painful.  There were fleeting flirtations with baseball (as there always are), though the Braves quickly ended that with their maddening highs and lows (as they always do).  There was the ever warm embrace of the Premier League and even the World Cup, but an All-American man can only watch Luis Suarez feast on flesh for so long before he himself hungers for a more brutally violent sport into which to sink his teeth.

But none of that matters now... because sweet, glorious, adrenaline-pumping, delirium-inducing college football has returned!

So without any further ado, here is what you should be watching this weekend...

There is but one game kicking off the College Football Season and it features the Georgia State Panthers taking on the Abilene Christian Wildcats at 7 pm on ESPNU.  It may not have far-reaching implications, but it's college football dammit! So tune in!

Thursday evening is when the actual choices begin and there are some doozies. I'm assuming everyone will be tuning in to see the SEC Network's opening live football broadcast as the #21 Texas A & M Aggies take on the #9 South Carolina Gamecocks (6 pm SECN).  Honestly, I'll probably stay tuned to this one for most of the night while flipping between the Wake Forest Demon Deacons testing the mettle of the Louisiana-Monroe Warhawks (7 pm ESPNU) and the #18 Ole Miss Rebel Black Bear Ackbars trying to avoid embarrassment in the Georgia Dome at the hands of the Boise St. Broncos... hmm where have I seen this before? (8 pm ESPN). Once those games are over, you can check out the Temple Owls and the Vanderbilt Commodores (9:15 SECN) and then the night owls can hit up the Rutgers Scarlet Knights and Washington St. Cougars at 10 pm on Fox Sports 1.

The selections on tap for Friday are a bit lighter, but there is still fun to be had.  I'll personally be watching the BYU Cougars visit the UCONN Huskies (7 pm ESPN) and then the UNLV Rebels and the Arizona Wildcats (10:30 ESPN).  There is also the first in-state rivalry game of the year as the Colorado Buffaloes face off against the Colorado St. Rams in Denver (9 pm FS1).

Saturday's early games start even earlier than usual this week as the Penn St. Nittany Lions and the UCF Knights visit Dublin, Ireland (8:30 am ESPN2).  Not that you ever needed an excuse to drink at 8:30 am on a college football Saturday, but if you did, here it is.

Regular noon games commence after Lee Corso does this... 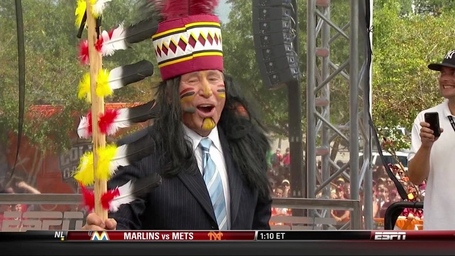 ...which for some reason is not a big deal to the same "journalists" who think the Washington Redskins have the most offensive name ever.  Hmmm... It's not like them to change their narrative to whatever suits their purposes... but I digress.

Most folks will opt for the #7 UCLA Bruins at the Virginia Cavaliers (ESPN) or the #5 Ohio St. Buckeyes struggling to put away the Navy Midshipmen in Baltimore sans Braxton Miller (CBSSN).  Some might even tune in hoping for a repeat of 2007 as the Appalachian St. Mountaineers travel to Ann Arbor to take on the Michigan Wolverines (ESPN2).  I however, will mostly be watching the Georgia Southern Eagles as they attempt to repeat their heroics in "The Swamp" against similar major conference opposition in the N.C. State Wolfpack (ACCNet/WUPA).

The afternoon is host to a bevy of SEC games as the #2 Alabama Crimson Tide take on the West Virginia Mountaineers in the Georgia Dome (ABC), the #6 Auburn Tigers take the hapless Arkansas Razorbacks behind the woodshed (SECN), and the #24 Missouri Tigers get things off to a "roaring" start against the South Dakota St. Jackrabbits (ESPNU).

Those of you with neither taste nor culture are free to watch the Rice Owls face off against the perennially overrated #17 Notre Dame Fighting Irish (NBC of course... no wonder that ship is sinking!). But what everyone should do is watch the #16 Clemson Tigers and the #12 Georgia Bulldogs in the weekend's biggest match-up (5:30 ESPN)

There are a number of evening games for you to enjoy once the Georgia/Clemson game ends.  Most notable of these are the pair of games in Texas that feature no teams from Texas: the #13 LSU Tigers and the #14 Wisconsin Badgers in Houston (ESPN) and the #1 Florida State Seminoles and the Oklahoma St. Cowboys in Arlington (ABC). If that doesn't do it for you, you could always check out the Idaho Vandals as they try to start the unranked Florida Gators off with a loss(ESPNU) or the Fresno St. Bulldogs visiting the #15 USC Trojans (FOX).

There's only one late game this week but it could be an interesting one as the #25 Washington Huskies travel to Honolulu to battle the Hawaii Warriors.

Since its another week until the Pros take over on Sundays, we get a couple of notable college games this week.  At 7 pm on the SEC Network, its the Utah St. Aggies and the Tennessee Volunteers while at 7:30 on Fox Sports 1 we have the SMU Mustangs and the #10 Baylor Bears.  Not a bad way to end Sunday before the holiday on Monday.