How Many SEC Officials Does it Take to Screw Up a Lightbulb?

Share All sharing options for: How Many SEC Officials Does it Take to Screw Up a Lightbulb?

I suppose the idea behind all of this is to make sure the game is called correctly on the field by adding an extra pair of eyes in the offensive backfield, called a "center judge."

Pragmatic Dave: Good move.  As the article alluded to, the pace of the game - especially with the advent of the Hurry Up No Huddle (HUNH) offense - demands another official with a dedicated view of all the shenanigans, shifts and stuff that takes place in the contemporary game with quick substitutions, pace, and a ton of holding calls that simply don't get called.  That 8th zebra on the field will improve the game and, ultimately, result in correct calls that would otherwise have not been seen.  It will insure more quality from the perspective of rules and enforcement.  Maybe that eighth official throws the flag on the blatant holding call on Auburn's miracle 4th down heave.  PWG?  PWG.

Cynical Dave: This is a bad idea.  Why?  Adding another SEC official just flat makes me cringe, that's why.  The Magnificent Seven on the field last year constantly screwed things up, thus perpetuating the whole "Playing While Georgia" curse.  And it has been a curse.  An eighth official just adds another 12.5% chance that things will go wrong for the good guys.  What if Penn Wagers has a brother or cousin who wants to ref SEC games?  This is just inviting trouble.  Of all the Conferences in America, I'm not exactly thrilled with the quality of the SEC crews as a collective, and this has been a real concern for several years running. There are a few guys that seem to get it right, but even guys like Tom Ritter are losing their edge and effectiveness.  I'd rather see the Conference get some younger guys who, like, can actually see. 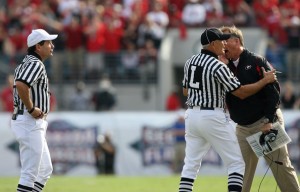 Eight is enough?  Or too much?

This will be interesting to watch.  In all seriousness, I'm leaning towards actually approving this idea but still stand by my thoughts on the overall effectiveness and aptitude of the current crews in the Southeastern Conference.  Thoughts?  Let's hear 'em.