Gym Dogs Finish Fourth At SEC Championships with a 197.150

Alabama wins their 8th SEC Championship in front of a mostly-home crowd, with Florida and LSU finishing 2nd and 3rd.

Share All sharing options for: Gym Dogs Finish Fourth At SEC Championships with a 197.150

Coming off of last week's away loss to #4-ranked Utah (but at which they posted their highest away score of the season)*, the Georgia Gym Dogs rolled into Birmingham's BJCC Arena knowing they were going to be facing a hostile crowd for the SEC Championship meet. The mostly-crimson-clad crowd in The Magic City did not disappoint, either.  The Bama faithful propelled their 4th-ranked Gym Tide squad to a victory over the top two teams in the country in Florida and LSU, while Danna's Dawgs put up a respectable showing, but continued to show the weaknesses that have plagued the "second half" of our lineup over the season.

Unlike dual meets that have only two teams competing and always start with either vault or uneven bars, four teams compete at a time in the SEC Championships.  (There are 8 total SEC programs that field gymnastics teams, so they compete in 2 different sessions... an afternoon session for seeds 5-8 and an evening session for seeds 1-4.)  This means that there is truly no "standard" rotation, and one only hopes that their team isn't thrown off by the change in routine.  (This is good practice for the NCAA regional and national meets, however, in which there are actually 6 teams competing at once, which means not only do you not get a "standard" rotation, but you also have 2 bye rotations to deal with.) 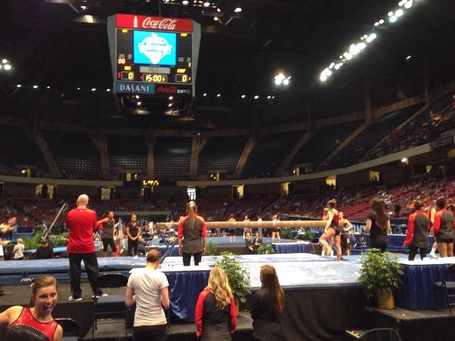 The scene during warmups on balance beam. (Yes, we see you there in the bottom left, Ms. Photobomber.) Photo credit: UGA Sports Communications Photobomb credit: Unknown

The teams were assigned to their rotations based on their national ranking, so Florida (#1) started on vault, LSU (#2) started on uneven bars, Alabama (#3) started on balance beam, and Georgia (#4) started on floor exercise.  The teams then rotate "to the right" (as I like to think about it), with UF moving to bars in the second rotation, LSU to beam, Bama to floor, and UGA to vault... and so on.

As a result of their fourth-place seeding, the Dawgs had the unenviable task of starting on the event which, in terms of national ranking, is our worst event. And unfortunately, we suffered another major blow before the meet even began.  Brittany Rogers, our stellar sophomore gymnast who has been our only all-around competitor all season long, suffered an (unspecified) injury during warmups and was scratched from the vault and floor lineup.

So we started the evening on a sour note, and the news didn't get better on floor. Not only did no Gym Dog score a 9.9 or better, but the highest score of the entire event was Brandie Jay's 9.825 as Georgia tallied a 48.950 for the first rotation. I wasn't following along on the streaming video, so I can't say why our scores were so low overall, but something clearly was up.  I don't know if we intentionally chose less demanding routines due to falls we've had in previous meets, or if Rogers' injury mentally rattled her teammates, or what... but I believe this is the lowest floor rotation we've scored all season in which we didn't have to count any falls.

If you read my commentary after the Denver meet, you know that any score below a 49.0 is likely a "meet-killer," so we were basically out of the running for anything better than fourth right from the beginning, which is disappointing. (Finishing fourth is nothing to be ashamed of, I must say, but taking yourself out of the competition for anything better than that in the first rotation is the disappointing part.)

Fortunately for us, our second rotation was on the vault, and we rebounded nicely.  Lauren Johnson, who replaced Brittany Rogers in the lineup, led the scoring with a 9.975, which earned her a share of the individual SEC vault championship.  (Congratulations, Lauren!) Lindsey Cheek and Brandie Jay also carded 9.90's as Danna's Dawgs tallied a much more respectable 49.450 for their second rotation, leaving them with a "halftime" mark of 98.400, which still left them in fourth place.

The Gym Dogs moved to the uneven bars for the third rotation, which is our strongest event, and in which they're still ranked #1 in the country. And they performed exceptionally well tonight, with none of the 6 gymnasts scoring below a 9.90 (and the lone 9.90 was the score we dropped).  Kiera Brown, Lindsey Cheek, and Chelsea Davis all carded 9.95's; Cat Hires and Brandie Jay both scored 9.925's, and Brittany Rogers played through her injury to tally a 9.90.   When the smoke cleared, the Dawgs had scored an eye-popping 49.700 on bars, which is the best bars score carded by any team in the country this season and is the best bars score any UGA Gymnastics team has seen since 1999.

Going into the final rotation, the Gym Dogs had climbed into third place with a 148.100, and they finished the meet on the balance beam. Unfortunately, for the second time on the night, we once again had no 9.9's or better... and even more disturbingly, our best score once again was only a 9.825 (from Earls and Brown). The team carded a 49.050 for the rotation, which gave us the previously-mentioned final score of 197.150.  The full list of final rankings and scores can be found at this link.

Honestly, I just don't know what to make of this performance.  I'll let Coach Durante do most of the talking for me, since I mostly agree with her assessment:

It's a little bittersweet. I feel like this team is better than fourth in the SEC but we faced some amazing competition tonight and saw some great things for the second week in a row. Even though some events were stronger than others I'm proud of the way this team continues to fight and battle and get better and better each week. No question we have some things to work on as we go into regionals, but I'm excited about the great things that came out of tonight.

That's pretty much right on the money.  It hurts (literally and figuratively) to lose Brittany Rogers, and we all wish her a speedy recovery and hope she can be back in time for the NCAA's, but the team's collective performance on this night wasn't simply due to the loss of her routines. We unquestionably have the best bars squad in the country, but we are merely "pretty good" on vault, mediocre on beam, and positively average-to-below-average on floor.

I don't mean to sound too down on this squad, because I do think we are continuing to make progress, and I think Coach Durante has the right mindset and the right attitude, and is taking our program in the right direction. The primary cause of my frustration is that I can see that this team is capable of more... quite a bit more... and we just can't seem to get there yet.

Fortunately, for us, however,  the road actually gets slightly easier before it gets more difficult.  The SEC championship meet is just for bragging rights; it doesn't count towards the NCAA RQS score and doesn't affect regional qualifying.  As a result, our #6 national ranking ensures that we will be placed in the NCAA regional hosted in Athens in two weeks (April 5), and that we will be the top seed in that regional. All we have to do is finish in the top 2 in that meet to move on to the NCAA nationals at... (looks up host site)... the BJCC Arena in Birmingham, Alabama.

* - We failed to cover the Utah meet last week at Dawg Sports, and for that unforgivable oversight we are greatly shamed. As a result, the person in charge of gymnastics coverage at Dawg Sports has been sacked.**

** - Ok, so that last statement was, unfortunately, a lie. The person in charge of gymnastics coverage at Dawg Sports is myself, and I have, in fact, not been sacked, as evidenced by the fact that I am currently writing these words. We at Dawg Sports are greatly shamed at having lied so brazenly to you, our loyal and faithful community of Georgia Bulldog fans. Those responsible for telling egregious lies have been sacked.***

*** - Ok, so that statement was technically true, though it was, sadly, quite misleading. What I stated was that "those responsible for telling egregious lies have been sacked." This statement is technically true, since there have been many egregious liars who were sacked for telling their egregious lies. The most recent example at UGA was probably Jim Harrick, though I would have used a more recent SEC example at Tennessee in Bruce Pearl if he hadn't just recently obtained a job at the University of Egregious Lying (And Cheating) in Auburn, Alabama. We at Dawg Sports are greatly shamed that, though we have not egregiously lied, we have misled you somewhat. Those responsible for somewhat misleading you have not been sacked, but instead make their apologies for causing you to read a bunch of extraneous postscripts at the end of this article.