You're On Notice, Dawg! Week 7

Georgia didn't cover last night (as predicted), but the game was never really in doubt. Now we can start to worry in earnest about this week's matchup.

Share All sharing options for: You're On Notice, Dawg! Week 7

Good evening, Dawg fans.  I'm going to apologize in advance for this week's feature, which will be pitifully short.  I'm writing this in an exhausted, sleep-deprived state late on Saturday night after getting in from a long day of tailgating, basking in the otherworldly glow of Todd Gurley, and enjoying near-lethal doses of Aggiefreude (Trillfreude?) and Bamafreude. And I'm watching what I hope will be some Chickenfreude as I'm writing this (post-writing edit: HAHAHAHAHAHAHAHAHAHAHAHAHAHAHAHA).

When you read this, I'll be zooming above your heads at approximately 30,000 feet on a long plane ride, and I will have previously spent all of the earlier part of the day at a solemn (and sad/unfortunate) family event, so basically I'm making excuses as to why I couldn't give this feature the time and attention I normally do.

This Saturday, the Georgia Bulldogs head to the "good" Columbia to take on the leaders of the SEC East, the Missouri Tigers. I'm very worried about this game.  Let me explain... no, there is too much.  Let me sum up: They're at least as likely to beat us as South Carolina was.  Therefore, I'm letting the following people, places, and things know that, for Week 7, You're On Notice, Dawg!

1) Steve Spurrier - Why Steve Spurrier? Because he hates us, we hate him, and because I have it from a very authoritative source inside the South Carolina administration that he's currently in negotiations to take over head coaching duties for the Florida Gators for one day in early November.  Don't think he wouldn't do it. No, it doesn't matter that the Gamecocks have a game in the "bad" Columbia that day.  South Carolina's season is over, and you know which team is really #1 on Spurrier's priority list.

2) Hutson Mason - The beleaguered QB's semi-permanent position in the #2 spot is still secure after the Vandy game.  I think we saw in this game why Brice Ramsey is still the backup quarterback, but Mason didn't do anything to increase our confidence in his abilities, even on a day where the offensive coordinator seemed determined to prove that we could move the ball using the pass, even if it was against a terrible defense like Vandy's.

And though the 11/17, 121 yard (with 2TD's and 1 INT) performance wasn't horrible... he was upstaged by his own running back chucking the ball about as far as Mason has ever thrown it. I'm not complaining, per se... but that still ain't good for #14.

3) The 3-fense/Mike Bobo - On Saturday, Todd Gurley ran for 163 yards, threw for 50 yards, and had 24 yards receiving.  We didn't have an offense.  We had a 3-fense (with apologies to Chris Conley, who had 2 great TD catches).  I applaud Mike Bobo for giving Todd Gurley the chance to pad his Heisman resume and get those highlights that you need on ESPN to generate real Heisman buzz, but we are going to need more than just Gurley to beat Mizzou. We've been scoring lights-out in every game so far this year, so I don't really have too much in the way of grounds for a complaint, but it looks like Mizzou is going to be at least the second-best team we've played so far this year (behind Clemson).

You know the Tigers are going to load up 9 and 10 guys in the box to stop Gurley and just brazenly dare us to beat them with the pass.  If we have no other threat... well, the Goat Roast this Saturday might end in an actual roasting of something.

4) Charmin - I'm getting really ticked off at Charmin-brand toilet paper.  I mean, it's just so pillowy-soft and accommodating to your sensitive areas.  It's really the perfect metaphor for our defense, and that makes me angry.

5) The entire defense - Yeah yeah, we held Vanderbilt to 17 points, so that's good, right?  Well... although we only allowed 17 points and kept the Vandy special teams in check, we allowed the Commie offense to rack up more yards than they have gotten against any team not named "South Carolina." And Vandy missed a field goal, too. If they had made that, they would have scored exactly as many points on offense as they did against the Gamecocks in what Steve Spurrier called "the worst win he's ever had."

Let me boil it down a little bit: our defense isn't horrible but it is horribly inconsistent. We'll have 2 or 3 great defensive stands, then let our opponents march up and down the field for 3 or 4 drives. Vanderbilt doesn't have a good offense.  In fact, Vanderbilt has a terrible offense. When we play teams that have good offenses, we're just gonna have to outscore 'em, I guess.

6) No, really, the entire defense - See above. Somehow, in addition to our pass defense, our run defense has been trending downward over the past couple of games, too. Even if we manage to somehow beat Mizzou, Arkansas is going to murderkill us if we can't even stop the run.

7) Vineyarddawg - Why am I putting myself on notice this week?  Well, it's simple:  I can't find it within myself to dislike Mizzou.  I know people think they're fake SEC and meth kings of the Midwest and all... but I can't help it.  I like Columbia, Missouri. It's approximately 1,657% better than Columbia, South Carolina. I like Bill Connelly, the proprietor at Rock M Nation (SB Nation's Mizzou blog) and master of the 128-strong every-FBS-team-preseason-preview.  I even like Faurot Field (fondly dubbed "Farout Field" by DavetheDawg), which has an archetypal charm, even though it's not a huge stadium.  And when we first traveled to CoMo, their fans did things like this:

I like Mizzou. In weeks when they're not playing Georgia, I want them to do well. And I'm not above reproach in features like these.  So, Vineyarddawg, shape your butt up, dude.  Start fomenting that strong dislike for TRADITIONAL SEC EAST RIVAL THAT BEAT US LAST YEAR.

8) Truman the Tiger - Ok, I said something nice about Mizzou, so now I get to call them out on their mascot.  He's weird.  He has an expression that perpetually makes it seem like he just saw the blue lights in his rear-view mirror while doing 95 in a 35 zone. I just don't get it.  He's literally the least likeable thing about the Tigers.  So he's on notice. 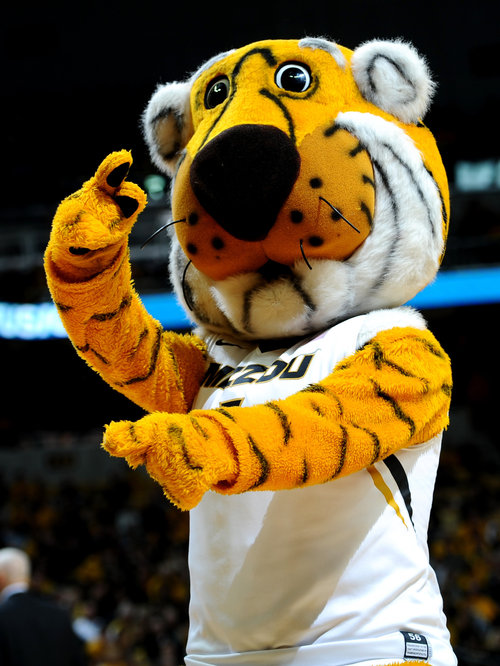 That's it for this week!  If you're going to be in or near the Athens area, come to the Blind Pig Tavern on Saturday and partake in the wailing and gnashing of teeth cheer on the Dawgs with your fellow denizens of Dawg Sports at the Fifth Annual Goat Roast!  Look for updates from podunkdawg in the next day or two, once the time of the Mizzou game is confirmed.  We'll probably start showing up about 30 minutes before kickoff, and as usual, we'll probably appropriate the side room (on the right as you come in) for the affair.  And, if it's not a 7:00 kickoff, it's a distinct possibility that Mrs. Vineyarddawg and the Vineyardpup will be there, too!  I hope we'll see y'all there!  Until then...