The 6th-ranked Dawgs rolled over their outmatched opponents from the Hawkeye State as they prepare for a huge meet Friday against the Florida Gators.

There is a legitimate scheduling philosophy in college gymnastics that believes it's best to hold meets against the best opponents in the country, because ostensibly you're at your best when you're competing against the best.  And for almost as long as the University of Georgia has fielded a gymnastics team, we have subscribed to this philosophy (including in 2014). After all, when strict wins and losses don't matter, only your overall score which is tabulated at the end of the season, why not compete week in and week out against the best?

In truth, that perspective has generally held true for the most part. Georgia's gymnastics team has frequently scored its best when competing against top-flight competition, and encountered scoring slumps when holding meets against lesser squads. One of the most recent examples of this effect was last season, when the Gym Dogs struggled to a (remarkably uncommon) tie against Kentucky in Lexington, scoring only 195.825.

Well, on Monday afternoon, coach Danna Durante's Georgia Gym Dogs took a virtual breather against an unranked Iowa Hawkeyes squad, who wasn't expected to provide much of a challenge.  As such, we might have reasonably expected the Dawgs to have a relative "down day," as well.  Oh, buddy... were we ever wrong. Danna's Dawgs, who are ranked #6 in today's college gymnastics rankings, notched their best score of the young season, putting up a tally of 197.400 to Iowa's 194.675.

Once again, a great crowd was on hand to cheer our ladies on... and the Gym Dogs themselves got into the action before the meet:

Once the action began, Georgia started on vault, with Iowa on the uneven bars. It was a solid rotation for the Dawgs, with senior Lindsey Cheek carding a 9.90.  We didn't have to count a score below 9.800 as the team put up a 49.175 overall.  This is slightly below our season average, but certainly isn't bad overall.  Iowa turned in a 48.775 on bars, with only one gymnast scoring above a 9.8.

After the first rotation, Dawg fans would have been feeling pretty good about the way things were going so far... but none of us expected what would come next.  On vault, sophomore Brandie Jay started the action well, ripping off a 9.90.  Then, unfortunately, senior Cat Hires suffered a fall that resulted in a 9.125 score, thereby upping the pressure on all of the following gymnasts to not mess up so we could drop that score, right?  Well, I don't know, you tell me... the next three gymnasts were freshman Kiera Brown, Lindsey Cheek, and sophomore Brittany Rogers... who all put up scores of 9.95. Clutch?  Yeah, we got it.  After junior Chelsea Davis finished up with a 9.775 (which, in my opinion, was unfairly low), the Gym Dogs were looking at a sky-high rotation score of 49.525.  Iowa, which was on vault, carded a 48.350 after having to count a fall. 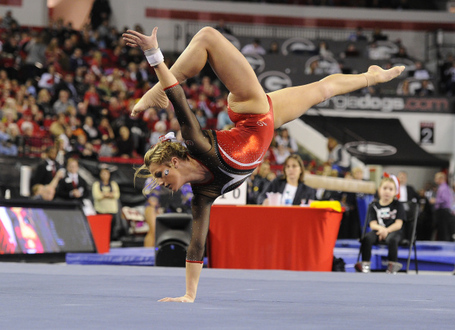 So, at halftime, Danna's Dawgs led the affair 98.700 - 97.125.  At this point, we all knew that this wasn't going to be a "down day" for the Dawgs, and most of us were sitting on the edge of our seats to see what was next. And our ladies didn't disappoint.

The Gym Dogs spent the third rotation on balance beam, and we had another unfortunate fall early in the rotation (freshman Morgan Reynolds, who went second). That seemed to once again spur her teammates on, however, as Brittany Rogers scored a 9.90, and Lindsey Cheek and senior Kaylan Earls both scored 9.925's. Sophomore Mary Beth Box's 9.875 and Ashlyn Broussard's 9.80 served to knock out the score from the fall, and the Dawgs ended up with another exceptional rotation score of 49.425.  Iowa turned in their best rotation of the night on floor, carding a 49.000. Going into the final rotation, the Dawgs had a full 2-point advantage over the visitors, 148.125 - 146.125. 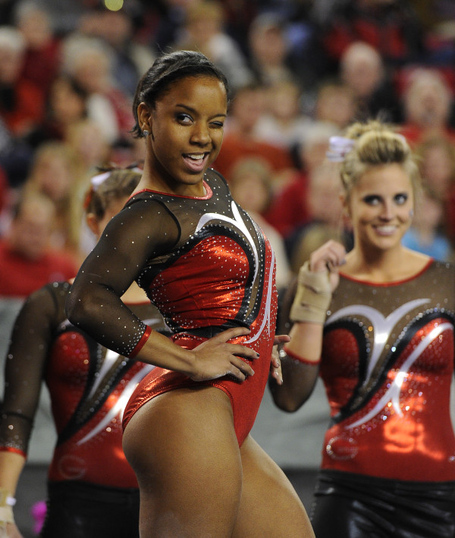 The final rotation on floor was a solid effort by the Dawgs, with Bradie Jay earning the only 9.90 score. Once again, though, the team didn't have to count a score lower than 9.80 as they rolled to a floor team score of 49.275.

When the smoke cleared, the Georgia Gym Dogs only had to count 1 score below 9.8 all night enroute to a massive 197.400 overall tally.  This is a phenomenal early-season score, and is good for the second-best score in the nation so far this season.  (The best score was the 197.700 Oklahoma carded against us in the season opener.)

I can't tell you how excited I am by this result.  Yes, we still had home-field advantage with the crowd firmly behind us, but we also showed that we can pick it up and challenge ourselves to perform our best, no matter what the competition is doing.  That, including the mental toughness it takes to buckle down harder when a teammate is going through adversity, is exactly what we need this team to be showing us.  I think the ceiling for this group is... well, I don't know if there is one.  If we can still put up a score in the 197+ range in Gainesville against the Gators on Friday, I'm going to start getting nervous.  (I get nervous, you see, when things start to go too well.  I can't help it... it's the Munson in me.)

The Gym Dogs' next meet is this Friday in Gainesville against the defending national champion and #3-ranked Florida Gators.  Like the Dawgs, the Gators started their season on the road for their first two meets, and won both of them at UCLA and at Auburn.  The fact that they still scored well enough to be ranked third shows what a formidable squad they are, and this will be their home opener.

I've never gone on a bender after a gymnastics win before, but you folks know how I feel about Florida.  If these Gym Dogs can go down to Gatorsville and ruin the home opener for the defending national champions... well, I've got a baby in the house now, so I can't go too wild.  I'll be real damn happy, though.