After struggling in their first two meets on the road, Danna's Dawgs rebounded strongly Friday night at home, carding a very impressive 197.175, which bested the 196.875 score put up by D-D Breaux's (and former UGA coach Jay Clark's) LSU Tigers.

The evening started on a high emotional note for the Dawgs, with their families forming a tunnel to welcome them onto the mat... 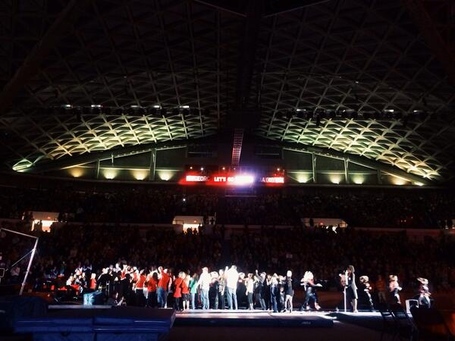 ... and the students showing up in force to cheer on their team. 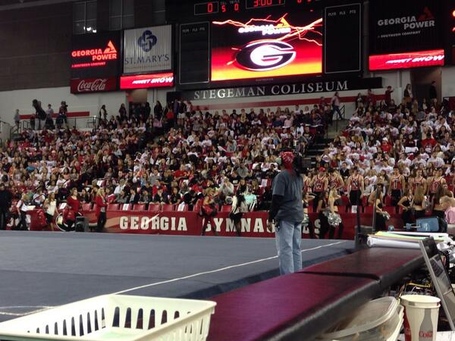 Georgia started out the night on vault, and junior Chelsea Davis set the tone with a 9.90 right off the bat. Senior Lindsey Cheek also scored a 9.90, and the Dawgs didn't have to count a score lower than 9.85 as they carded a very strong 49.375 for the first rotation.  LSU, on the other hand, only received one 9.90 (from their star senior Rheagan  Courville) on the uneven bars enroute to a 49.200 first rotation.

The Gym Dogs and the Tiger Tumblers switched apparatuses (apparati?) for the second rotation, and Danna's Dawgs truly blew away their routines on the uneven bars. Chelsea Davis followed up her stellar vault with a sky-high 9.975 on the bars, and Lindsey Cheek followed up her 9.9 vault with a 9.925 bars routine.  Sophomore Brittany Rogers also carded a 9.90, and with solid performances (and no falls at all) from all of the other competitors, Danna's Dawgs had themselves a fabulous second rotation score of 49.475.  LSU had a very strong vault performance in their second rotation, however, scoring a 49.425.

At "halftime" (after 2 rotations), Georgia led the meet 98.850 - 98.625.   It might not sound like much to the casual observer, but a 0.225 lead is pretty significant to have against a strong opponent like the Tigers.  Think of it as a 2 touchdown lead in football or a 4 goal lead in lacrosse (for those of you named "T Kyle King" out there).  It's certainly not insurmountable if you screw up, but it's a strong advantage.  Unfortunately, the rotation that really hurt us in the first two meets was the floor routine, and we were scheduled to perform on the floor last, so we needed to make sure our lead was as padded as we could make it before that time.

For the third rotation, the Dawgs were on the balance beam and the Tumbling Tigers took to the floor. No Gym Dogs scored 9.9 or above on the beam, and the highest score was a 9.875 carded by Lindsey Cheek (who had a spectacular night with two 9.9+ scores and this almost-9.9). Unfortunately, Brittany Rogers fell during her routine, which caused us to have to count a 9.70 score from sophomore Mary Beth Box.  Ultimately, the beam turned out to be the Gym Dogs' worst rotation of the night, as they carded a relatively-pedestrian 49.050 (which is still not too shabby for an early-season score).  Fortunately for the good guys girls, LSU didn't take full advantage of the opportunity, since Rheagan Courville stepped out of bounds on her floor routine, earning only a 9.725, and only one Tiger gymnast (Jessica Savona) scored a 9.90 enroute to a third rotation score of 49.175.

So, after three rotations, the score stood at Georgia 147.850, LSU 147.800 (a razor-thin margin), and we all held our breaths heading into the final rotation on the floor.

Danna's Dawgs were not to be denied on this night, however. Sophomore Brandie Jay and Freshman Morgan Reynolds led the way with 9.90 scores, and the entire squad put on excellent performances.  Georgia didn't have to count a floor score lower than 9.80 as the Dawgs carded a 49.275 on the final rotation of the night, redeeming themselves after last week's display in Palo Alto.  LSU didn't suffer any falls on their beam rotation, but also didn't card any 9.9's or better, as they marched towards a team score of 49.075.

And so, after all was said and done, the score stood 197.175 - 196.875 in the Gym Dogs' favor.  Georgia carded their first win on the season, now stands at 1-0 in the SEC, and in the process got a little "payback" on LSU associate head coach (and former UGA head man) Jay Clark, whose Tigers had roundly beaten the Dawgs last season in Baton Rouge.

Just to give a little perspective on the situation, a score of 197.175 is right around the neighborhood we'll need to be to make the Super Six at the end of the season.  (Our score last year of 197.150 is what got us in.)  To be achieving these scores this early in the season is very encouraging, as it hopefully signals that we can continue to improve and do even better than that, which would seriously put us in the running on the national stage. I'm very excited about this result, especially since we were able to turn around from the disappointing Stanford meet to come up with this number.

Congratulations to the Gym Dogs!  Keep up the good work and we'll be cheering you on again Monday against the Hawkeyes!