During our roundtable prediction post, our "average prediction" for the staff was that you would be seeing a post full of kittens after the game. Everything went better than anticipated, however... so we're going with a post full of bulldog puppies instead.

Share All sharing options for: You're (Not) On Notice, Dawg! Week 3

Typically, this is the time on Sunday when the put the previous week's game behind us and focus on our upcoming opponent. This week is a bye week for the Dawgs, however... so we're gonna let this one sink in for just a little longer. :-)

Also, I typically use this space to "call out" certain members of the Georgia team/coaching staff/fanbase for the coming week, and I honestly considered doing so again this week. I had 6 of the "On Notice" spots filled out in my head before the game was even over, in fact. But after such a big win, and with so much to celebrate both on the field and off, I decided instead to reward the following people for their performance this week by letting them know that You're (Not) On Notice, Dawg! 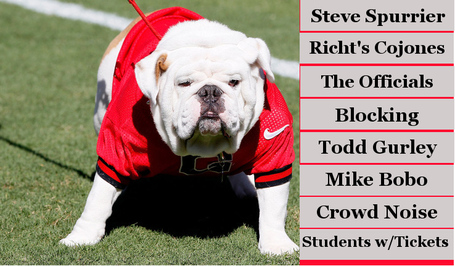 1) Stephen Orr Spurrier - I usually choose a different #1 for the "Not On Notice" articles, but I simply couldn't leave out a few works of thanks and congratulations for the Ol' Ball Coach. After failing to stop the Georgia offense on 4th down with more than 2:00 left in the game and with 2 timeouts still remaining, Coach Spurrier responded by... letting Georgia run out the clock. Like Lee Corso, he said, "Ah, f*** it," and decided that the game was over.

For this reason, and on this day only, I love ya, OBC. Consider yourself off notice.

2) Mark Richt's Cojones - Normally, our head coach can be found in the dictionary under the terms "buttoned down" and "conservative." Every once in a while, though, he becomes "Evil Richt" and makes weird play calls with abandon. And whoo boy, on those days...

After only two possessions had been contested and when Georgia had a 7-3 lead, Coach Richt calls an onside kick. An onside kick. In the first quarter. When we have the lead. If it hadn't have worked, and SCAR had gotten the ball on the 45 yard line and marched down the field to take the lead, you know we'd be hearing some idiots carping that Mark Richt "just didn't know how to coach in big games" and needed to be fired. But you know what? It worked, and we got points out of the ensuing drive (just a field goal, but still).

3) The SEC Officials- Hey, I'm as surprised as you to be seeing this here. Overall, though, I have to say that the game on Saturday was refereed very consistently. We didn't see a lot of flags on either side, and I thought they called a lot of the game pretty lightly. I do think they missed a roughing the passer penalty when Murray got clocked on his touchdown pass to JSW, but that's about the only bone I could pick with them all day. Overall, I thought it was a very well-officiated game... the officials were in the game, but they weren't a part of the game, and are not any part of the story about the game. That's exactly as it should be.

4) Blocking - Our blocking in this game was just beautiful, and such a huge improvement over the first game. I saw several blocks by players like Keith Marshall and Michael Bennett that made me just as excited as the results of the plays in which they occurred. (Not to mention that play where big ol' Quayvon Hicks had a hole twice the size of even a behemoth like himself through which to run. It was a beautiful thing.) Blocking is the key to opening up our running game and is also the key to helping Aaron Murray make the best possible decisions in the pocket. It's difficult to express how encouraged I was by our blocking improvement... it portends very good things for the future.

5) Todd Gurley - I hesitated to put Mr. Gurley on this list, because the people on this list are not on notice. And for all the rhetoric I spew about never naming any Georgia running back "the next Herschel Walker"... well, dude, you sure ain't making it easy. (And I wouldn't have it any other way.)

6) Mike Bobo - After putting the much-maligned OC on notice for the first two weeks of the season, it's only fair to call him out for doing a good job against the Gamecocks. The gameplan he came up with did an exceptional job of taking Jadeveon Clowney out of the game. A playmaker like Clowney is always going to get his moments in the spotlight, and he did disrupt several plays, registering one sack. Bobo called more QB roll-outs, though, and I saw at least two plays where our running backs sprinted directly past a blitzing Clowney. Also, since we knew Carolina's D-Line was the strength of their unit, more of our runs kicked out wide (until we wore the defense down later in the game). Overall, it was a well-planned scheme, and you have to give Bobo credit for engineering it.

7) Crowd Noise in Sanford Stadium - I have rarely been to a game in Sanford Stadium that was as loud, from start to finish, as this one was. The 2007 Auburn blackout is the gold standard (which will likely never be surpassed), but this game came close, and was easily the equal of the 2004 LSU game. I literally (1) couldn't hear myself speak during virtually the entire game (except when the offense had the ball... and sometimes even when they did).

Our crowd was jacked up for this game big-time, and it showed. I think it gave our players a little extra juice during key situations, and there's no question that the lack of ability to hear the QB affected Carolina's ability to audible. I'm not sure how much I like having the music over the stadium's speakers turned up to 11 12 before the game and during TV timeouts, but I don't doubt that might have had something to do with the loudness of the crowd, as well.

8) Students with Tickets - I have two simple words for you, students: THANK YOU. At kickoff time, every single seat in the student sections were filled, and those sections were as loud as they've ever been, which helped drive the rest of the crowd's enthusiasm. Having a raucous, full student section is a key to any great college stadium environment, and the students came through in grand fashion on this day. Well done, folks.

This was a magnificent victory for the Dawgs, and was a cathartic triumph over Steve Spurrier for the Dawg Nation. I'm just gonna sit back and savor this one for about 6 days, then I'll get back to putting people "on notice" next Sunday before the North Texas game. (If you're a soccer fan, as well, look for the big guy wearing a red shirt with a "G" on it in the sections behind the goal during the USA-Mexico match in Columbus, OH, on Tuesday. That'll be me. GO GO USA!)