Share All sharing options for: You're (Not) On Notice, Dawg! Week 6

I have to be honest... I haven't seen any of the postgame reaction (and, I presume, celebration) on the blog.  I was so mentally, emotionally, and physically exhausted after this game last night that I came home, ate some dinner with my family, and promptly collapsed into bed.  That was a hell of a game, y'all, but I realized something about myself after this one:  I'm much more constitutionally suited to a defensive war.  That's not a complaint, mind you... more of an observation about myself.  All those touchdowns and trading scores make me get way too high and way too low within a far too short period of time.

Still, our boys came up huge when their number was called and got the W.  The Georgia Bulldogs have managed to emerge from their 4 game early-season gauntlet with a ledger of 3-1, having bested 2 of the 3 top-10 teams they faced and remaining unbeaten in SEC play. We'll be heavily favored in every game but one from here on out, and as long as we take care of business (and beat Florida, which is never a gimmie in any year), we'll be in the SEC Championship Game for a third straight year.

Even though there were mistakes made and room for improvement in this game (glances at Damian Swann), I'd have to be insane to even think about putting anybody on notice this week. So, with the one caveat of warning everybody to be leery of a letdown this week against a more-capable-than-they-appear Tennessee team, I'm letting the following people know, You're (Not) On Notice, Dawg! 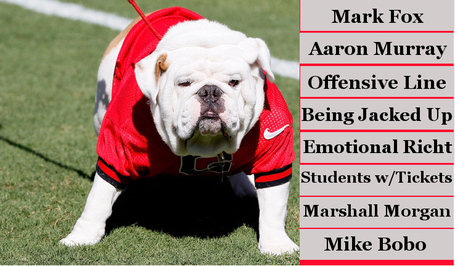 1) Coach Mark Fox - Georgia's basketball coach might be on as hot a hot seat as a basketball coach at Georgia can legitimately have, but he's proven from his first day on campus that he is a Damn Good Dawg.  That reputation was bolstered even further by this all-out performance Between the Hedges with the students yesterday:

2) Aaron Murray - Man, for everything that Murray did wrong against North Texas (and make no mistake, that was a very down day for our signal-caller), he did at least that many things exceptionally well against LSU. I'm not sure I saw even one unintentionally underthrown ball against the Bayou Bengals. His placement was exceptional, and his unwavering, confident leadership is one of the primary reasons our offense was such an unstoppable juggernaut all day, even after Todd Gurley went down. Aaron Murray was slingin' it like Billy the Kid on Saturday... firing shots all over the place, most of which connected with great effect.

3) The Offensive Line - Once again, this game served to prove that the North Texas game featured some kind of bizarro Georgia team that did everything exactly opposite of normal. While our run blocking was spotty at times (most notably in the second half), our pass blocking was exceptional.  Murray rarely got hurried at all, and suffered exactly zero sacks. Plz to continue to have. Plz?

4) Being Jacked Up Before A Game - In case you haven't noticed over the years, our team doesn't frequently get "super jakked and intense" before a game.  It's a reflection of Mark Richt's own personality, I guess, but our team usually gets more relaxed and focused just before they perform their best.  (I'm reminded of an anecdote Uncle Verne and Gary shared before the SEC Championship Game last year when they noted that during the walkthroughs the day before the game, Alabama was "super-intense," while Georgia was basically the exact opposite and "very relaxed.") For whatever reason, however, this was an exception.  And dang, was it ever an exception:

5) Emotional Mark Richt - Coach Richt has a firmly-established reputation as an even-keeled kind of guy.  He gets pumped, but he generally doesn't get too high and doesn't get too low.  Then, this happened:

Video credit: CBS
When you combine that with the fact that it sure sounded like he almost dropped an "f-bomb" on Tom Rinaldi during a postgame on-field interview... I think I like Evil Richt. No, I think I love Evil Richt.

6) Students With Tickets - Never have I been so completely happy to be able to stop putting someone on notice as I am at this moment.  In both our first two home games this year, the students showed up strong, and they were loud the entire game.  This week, however, they took it to the next level.  The student section was a good 85% percent full by the time I walked into the stadium 45 minutes before kickoff, and by the time the half-hour mark hit, the student sections were practically 100% full.  And only a hearing-impaired person would describe the student section last night as "loud."  I would describe the sound as more like "a jet engine having a romantic encounter with a nuclear explosion."

Good on ya, students.  Y'all have done fantastic work in the first 3 home games.  Keep it up!

7) Marshall Morgan - Let's not talk about kickoffs today, but Morgan game through in a huge way in exactly the game where we needed him to be huge. A 55-yard field goal ain't nothin' to play with, and Morgan nailed it right between the uprights, and also converted 24 and 38-yard efforts, to boot. Our final margin of victory was 3 little points, so we needed every one of his kicks (including PAT's) on the day.

8) Mike Bobo - I've taken flak for continuing to put Coach Bobo on notice, but I can't find fault with even Coach Bobo today. Losing Todd Gurley was a huge blow to his game plan, but he mostly played to our offensive strengths, and called as good a game as one could have called in this situation. Let's not forget that he's Aaron Murray's QB coach, as well, and when a QB plays as magnificently as Murray played in this game, the coach has to share in the credit, as well.  Well done, Coach.

Everybody's on cloud nine today.  You're there, I'm there, even the players are still probably there. And that makes me nervous, because the Volunteers are just sitting there in Knoxville waiting for us to come swaggering into town. This will be their first second game played on CBS this year, and you know they'll be relishing an opportunity to knock us off the pedestal upon which we've demonstratively placed ourselves. Let's enjoy the afterglow of this game and celebrate our hard-earned victory, but don't forget we have another hard-hitting SEC slobberknocker to play in 6 days!  Let's hope the coaches and seniors on this team can help the underclassmen reel it back in and regain the intensity we've showed thus far.  And, of course...