Share All sharing options for: Take 2 - Pick Your T-Shirt (Again)

By now you are probably aware that the NCAA has rules about people other than themselves using a players name in pretty much any way at all whether for profit or not. We reached out to the very kind folks at UGA Compliance and they asked us not to use that particular design. So we're going to try this whole voting thing again.

Here are your options in no particular order....

Keep Calm APU on Back

Killin' Commies has been withdrawn by the submitter 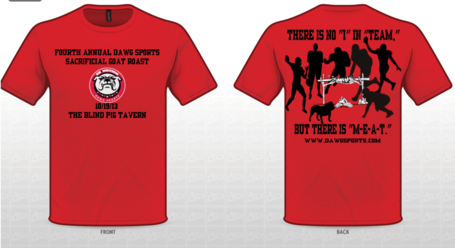 So once again...voting will still close on Friday Sept 27th at 11pm. Vote Early & Vote Often (well it won't really let you vote more than once, but you can make your friends log in & vote....)

Winner of the T Shirt Contest gets the satisfaction of knowing they won and the knowledge that at least a dozen of the Dawg Sports Family will be sporting their T Shirt design, but not anything else.