You're On Notice, Dawg! Week 4

Share All sharing options for: You're On Notice, Dawg! Week 4

Well, we made it! We managed to make it through an entire fall weekend that had no Georgia Bulldogs football, and even managed to avoid any brushes with the law or off-week injuries caused by overzealous scrimmaging.

And, to be fair, this week's opponent will probably only offer slightly more of a challenge than scrimmaging against our scout team. The North Texas Mean Green are 2-1, but have only played 2 MAC teams and a Division I-A Independent from the conference formerly known as the WAC (Idaho). Still, though, if there's one thing college football has taught us over the years, it's that you can never overlook anybody, even in a paycheck game. (I'm looking at you, Kansas State. And Michigan. And Auburn. And Florida.) That's why I'm letting the following people know that, for Week 4, You're On Notice, Dawg! 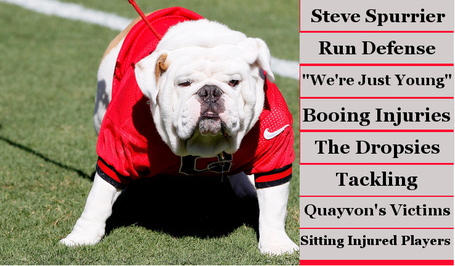 1) Steve Spurrier - Why Steve Spurrier? Because he hates us, we hate him, and because I have it from a very authoritative source inside the South Carolina administration that he's planning to be in Sanford Stadium this Saturday with a sign that says, "Hey, we play UCF next week... How'd it work out for you guys the last time you played them?"

Or maybe he'll just stay at home and practice his visor punting form.

2) Our Run Defense - Granted, our first two games were against top-10 quality teams. Even so, we've averaged 211 yards given up on the ground per game. Two hundred yards rushing per game. Even though our passing defense has been much better from a relative standpoint (176 yards/game), this is still not good. Our inability to stop teams on the ground cost us dearly in both of our losses last year, and we have to improve at that statistic this year to even have a chance to get back to the SEC Championship Game.

3) "Our Defense Is Just Young" - I'll admit that this was one of my key assumptions in our first two games, and was the primary reason I wasn't more critical of Todd Grantham or the defense's performance in either of those contests. Our defense really was inexperienced, and you can't legitimately expect a defense full of inexperienced players to shut down powerful offenses led by veterans.

Now, however, these young men have played 2 of the 4 most difficult opponents that we'll see in the regular season. Of our five leading tacklers, 2 are freshmen (Brendan Langley and Tray Matthews) and 1 is a sophomore (Sterling Bailey). This crew has now been battle-tested against some of the best that college football has to offer. They're no longer "young pups." They know what they're going to be seeing, and it's now time to respond. The last team in the early-season gauntlet, LSU, will be riding into town next week, and we need to get ready for that by shutting down North Texas. If we can't hold the Mean Green to less than 14 points, I won't feel very good about our chances against The Hat and Oconee County product Zach Mettenberger.

4) Booing Injuried Players - I railed against Clemson's fans mercilessly for booing our players when they went down on the field, even if it appeared once or twice that it might actually have been a bit of gamesmanship. It was fare more often the case that the player actually was injured in some way, and you don't boo injured players.

I was extremely disgusted and horrified, therefore, when I heard a sizable minority of fans in Sanford Stadium two Saturdays ago start to boo South Carolina players that went down during Georgia offensive drives. I mean, hell, we don't even have a high-speed offense (not anything close to Clemson or Oregon, anyway)... what the hell good is diving going to do for the Gamecocks? And more than one of those players were legitimately injured, so congratulations, jerks, you just booed an injured player and made us all look like Philadelphia Eagles fans.

From your seat in the stands, it is literally impossible for you to determine whether or not a player is faking an injury. So just keep your damn mouth shut when an opposing player goes down and clap politely when they get up and walk back over to the sideline. Do we understand each other?

5) "The Dropsies" on Offense - It's easy to gloss over a team's issues when you win a game. We beat South Carolina 41-30, so why gripe about our offense, right? Well... not exactly. Aaron Murray, Todd Gurley, and Co. found a way to deal with adversity and overcome mistakes made by their compatriots, but we had entirely too many dropped balls, especially by wide receivers. I can understand a defender missing a ball that hits his hands (as happened with Brendan Langley), because, as the old joke says, that's why they're on defense, right? For a wide receiver, though, when the ball hits your hands, that has to be a catch. There will come a game when the defense we're playing will not give us opportunity after opportunity to chuck the ball downfield, and we will need our receivers to take advantage of every well-thrown ball. In the same way that defenders need to wrap up every single time, our receivers need to pull in a ball that hits their hands every single time.

6) Tackling on Defense - Yeah, about the first part of that analogy I just made in point #5... our defense has been just straight sloppy in the first two games when it comes to tackling. We have seen very clear instances of defenders wrapping up the ball carrier, too often our defensive form has been inconsistent. We blitz a lot of defense, which means that we're also frequently in one-on-one pass coverage down the field. When the only thing standing between a receiver and the endzone is one defender, that defender has to execute a form tackle every time to save a touchdown. Hit, wrap up, and take down. Like this, and not like this. It's not as easy as it sounds, but it is a necessity.

7) The Poor Soul(s) Who Will Be Blocked And/Or Run Over By Quayvon Hicks - Devastatingly. And repeatedly. Just remember this: 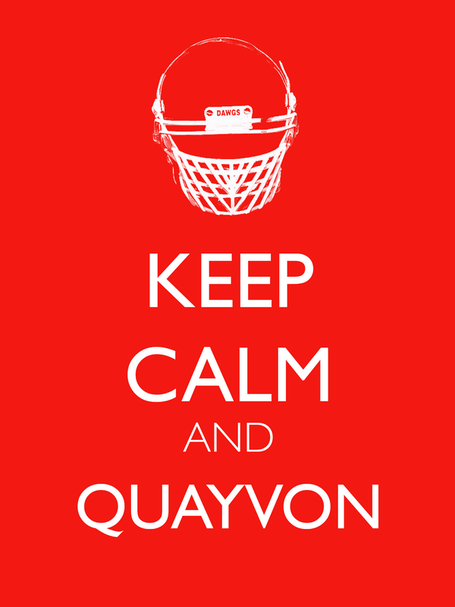 8) Bringing Back Injured Players Before They're Ready - Kenarious Gates and Keith Marshall both left the Carolina game with injuries. Apparently, both have been cleared for Saturday's game, but let's be honest: we won't need either of them to win. I want Gates and Marshall to get their time in if they're ready... but we're going to need both at top speed to take on LSU next week. If Gates and Marshall aren't 100%, Coach Richt needs to make the call to rest them until they are. Don't push it. I'd venture to guess that freshmen Brendan Douglas and J.J. Green could carry the rushing load by themselves if they needed to, and since we finally have a little bit of depth on the O-Line, we could carry on for the entire game without Gates, as well, if needed. Make sure we're at 100% next week for the Bayou Bengals. We'll need it.

You might notice that I didn't include a group that has been a stalwart on this list: Students with Tickets. Students, you made all of Bulldog Nation proud by showing up early and being super-loud in our last home game against South Carolina. Keep up the good work... since the alumni crowd probably won't be as pumped up for this game, we'll all be counting on y'all to bring the noise.

I'll see y'all on Saturday in Sanford Stadium... show up early, and be loud!