You're On Notice, Dawg! Week 2

Share All sharing options for: You're On Notice, Dawg! Week 2

Saturday was last week.  Can't do anything about it.  Can't change it.  All we can do is move ahead to our week 2 opponent, South Carolina, and an SEC-opener that is even more important for our season goals than last week's game.

Therefore, I'm letting the following people know that, for week 2, You're On Notice, Dawg! 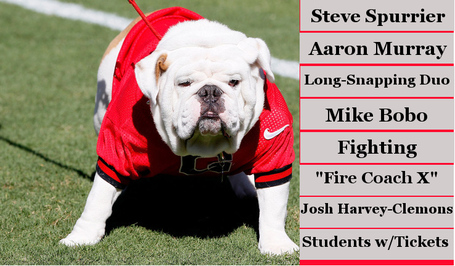 1) Steve Spurrier - All hail the new semi-permanent occupant of the #1 spot!  Why Steve Spurrier?  Because he hates us, we hate him, and because I have it from a very authoritative source inside the South Carolina administration that he personally helped Dabo game-plan a few extra wrinkles for the Tigers against us this past Saturday.

2) Aaron Murray - Aside from a rant about his actual performance in most of the Clemson game (stat line be damned), I will staunchly stand behind Aaron Murray.  He's been a DGD his entire career, and he's an elite-level quarterback.  When you perform as poorly as Murray did in a game that you yourself were hyping up, however, as an example of how you were going to be "in mid-season form," then I simply have no alternative but to put you on notice. Murray looked as rusty as a 5th-year senior quarterback can look last week.  He'd better be able to shake that rust off against Carolina, because little mistakes like a poorly-timed delay of game penalty or a boneheaded throw directly to a defender will cost us a victory against the Gamecocks, too.

3) The Ball-handling Duo of Adam Erickson and Nathan Theus - It's impossible to know what would have happened if UGA had tied the game up a 31 near the end of the 3rd quarter.  What we know did happen, however, is that on a glorified extra point, Theus snapped the ball too high and walk-on holder Erickson couldn't catch it. It doesn't even matter whether Marshall Morgan is back this or not if the snapper can't snap it reliably and the holder can't hold it reliably. We cannot put an elite-level football product on the field without a consistent kicking game. If we're to have a successful season, this is actually probably the most major concern in my book.  Many of our other issues are eminently more fixable.

4) Mike Bobo - Coach, you're killin' me.  I'm sure you had your reasons, but running the ball 3 straight times on the goal line into an area of the defense that we know is their biggest strength is not a winning strategy.  Be advised that South Carolina's D-line is at least as good as Clemson's.  Please plan accordingly.  (NO THREE STRAIGHT DRAW PLAYS IS NOT PLANNING ACCORDINGLY!  GAAAAHHHHHH)

5) Any Player Who Wants to Try to Start a Fight Before the Game - I don't think it was adequately covered on the TV broadcast, but before the game on Saturday, many UGA players ran over to the location where the Clemson players were running down the ramp and started taunted them, clearly trying to start a fight.  Seems like class took a vacation last night for a lot of people.  Get fired up.  Play your brains out.  But don't be an idiot.  Starting a pre-game fight is just stupid.

6) Any Fan Who (seriously) Wants to Fire (insert coach's name here) or to Bench Aaron Murray - If you look up "overreaction" in the dictionary, you will find this fan's name. He thinks that just because we lost last week, (coach's name) MUST BE FIRED NOW.  Or, possibly, he thinks that Aaron Murray is a punkass loser who has no business playing quarterback for the UNIVERSITY OF (expletive deleted) GEORGIA. I can understand emotional reactions and frustration, but sometimes you have to learn to get a grip and try to keep perspective.  This fan has not yet learned this lesson (and, possibly, never will).

7) Josh Harvey-Clemons - Seems a little unfair to put a player on notice who hasn't even played a snap, I guess... but that's part of the problem.  We needed JHC in the secondary this past Saturday, and we will need him in the secondary even more this coming Saturday.  South Carolina's quarterback, Connor Shaw, isn't as mobile as Tajh Boyd was, but he is just as good a passer, and the Gamecocks' receiving threats are just as good as those possessed by the Fort Hill Felines. And on top of that JHC will be coming in cold, without the 2013 game experience that the rest of the defense will have already had, so he'll have rust issues of his own that he'll have to deal with. Unlike the rest of the team seems to be, we need you to be in actual mid-season form, sir.  Our chances on Saturday strongly depend on it.

8) Students With Tickets - Regrettably (and I do honestly mean regrettably), this group is becoming my semi-permanent 7 or 8 slot for home games. We've seen stories from other schools around the country (most notably Alabama) that are also having problems with students not showing up for games, but I couldn't give a crap about Alabama students.  All I know is that our student section is all too frequently 50% (or more) empty at kickoff, and never fills up beyond 75% capacity. The administration has tried to address this issue by taking a few thousand tickets and selling them to recent graduates instead, and I applaud that move heartily.  What we really need, however, and what I would really prefer, is for the students to show up en masse at every home game and cheer their brains out for their fellow students.  Students, if you have a ticket, USE IT. If you have a ticket and can't make it to the game for some reason, use the university-provided facilities to resell it to another student.  Having a packed, loud student section will be a key to creating an intimidating environment this Saturday against the Palmetto State Poultry.

No one likes starting out the season on a low note, but we have an immediate chance to turn our fortunes around with a big game this Saturday.  We currently have a 3-game losing streak to the Gamecocks for the first time in history.  Turning that wagon back around into the W column would go a long way towards restoring the program excitement and momentum that we had in the preseason.  Not only that, but it would give us a 1-0 SEC record, and you can't win all your SEC games if you don't start out 1-0.  I'll be there cheering my brains out... I hope you will be, too!