You're On Notice, Dawg! Week 1

As our beloved Georgia Bulldogs prepare to return to the gridiron in 6 days, so we at Dawg Sports return to our annual game-week traditions.

Share All sharing options for: You're On Notice, Dawg! Week 1

Finally, after the long, arid desert known to outsiders as "the offseason," the actual playing of college football is once again upon us. Those of us who are fully immersed in college football, however, know that there's no such thing as "the offseason." There are just multiple seasons. First you have the actual regular season. Then, bowl season. Following that is recruiting season, which actually lasts well into March as the last recruits sign their LOI's and teams gloat or wail about their high class ranking or lack thereof. Finally, mid-March through August is the season where everybody predicts that their team is going to win the national championship this year but then has to be put on suicide watch when their top running back/quarterback/coach/AD gets arrested and suspended for half the season/kicked off the team/fired. It's a well-defined cycle. But I digress...

Like I said, IT'S FINALLY GAME WEEK. Six days hence, the 2013 Georgia Bulldogs will take the field at Memorial Stadium in Clemson, SC, to inaugurate their season against a historic rival that is also ranked in the preseason top 10. DavetheDawg has already kicked off our game week coverage by dishing out his 15 thoughts for Week 1, and I'm continuing the preview of this week's showdown with the Clemson Tigers by letting the following people know that You're On Notice, Dawg! 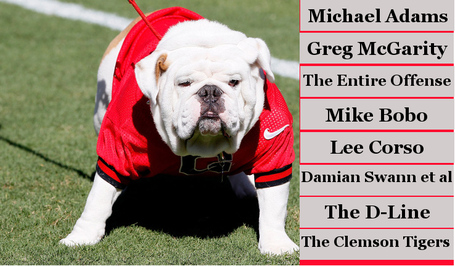 1) Michael Adams - Sadly, Michael Adams has left his position as President of UGA, so On Notice has to say sayonara to our traditional occupant of the #1 spot. We're still searching for a new suitable occupant for the #1 position, and will be happy to accept suggestions. For forcing us to find a new person to permanently hate from week to week, however, we will put Il Duce on notice one last time. Farewell, man-we-love-to-hate.

2) Greg McGarity - It seems like our AD has acquired his share of detractors recently, and some of that is to be expected. A major college AD without naysayers would mean that he probably isn't actually doing anything, and such can certainly not be said of our head man. I generally support McGarity and think he's been doing a good job thus far. I'm putting him on notice this week, however, because he has within his hands the power to continue the Georgia-Clemson rivalry, and the current state of affairs is going to essentially end the series after this home-and-home cycle. If we move to a 9-game conference schedule, there will be essentially only room enough for one competitive non-conference game on Georgia's calendar. And since we ain't dropping Tech, that spells the end of the rivalry with the Country Gentlemen. Therefore, I urge Mr. McGarity to stand against the rising tide of popular sentiment that a 9-game conference schedule is inevitable. Don't give in to the masses! Fight for an 8-game schedule that will allow us to keep playing Clemson on at least a semi-regular basis. Mr. McGarity, only you can prevent orange ceasefires.

3) The Entire Offense - It really makes me uneasy that so many people are so confident in our offense's presumed ability to score at will this year. I'm a firm believer that, last year, our offense played with a chip on their shoulder because they had constantly been told all offseason that the defense was going to have to carry the team. They wanted to prove the prognosticators wrong, and played with their hair on fire to prove themselves.

This year, however, the offense has been told all offseason that they're the best offense in Georgia history and they're going to steamroll everybody we play. I just ain't buying it, though. We've got a lot of skill players returning, but we had a ton of offensive skill players returning in 2003, too... and that didn't work out as well as we hoped it would. Our entire offense, from the line to the running backs to the wide receivers to the QB, has to play with just as much intensity and urgency as they did last year. Don't believe the hype, and don't rest on last year's laurels. We're starting from zero again this year, and you have just as much to prove as you did last year.

4) Mike Bobo - Yes, yes, Mike Bobo's offense was a juggernaut last year, so why am I putting him on notice? To put it simply, I don't think he changed his play-calling style at all last year. He still called first and bombs, still ran draw plays on 3rd and 7, and still completely forgot that a tight end could do something other than block for long stretches at a time. The difference in 2012 was that his players actually executed those plays better last year... over and over again.

I'll be the first to admit that I'm not an "X's and O's" guy, but even a strategery simpleton like me knows that you can't obsess over things like running an equal number of running and passing plays every single game. When something's working, you gotta press your advantage. Believe me, that green notebook's still there, and is still waiting to bite us at some crucial point. Coach Bobo needs to learn to break out of these destructive habits.

5) Lee Corso - Ah, f**k it. The old man has already earned the ire of those wearing red and black by declaring in the College Gameday preview show that Georgia was vastly overrated and had no business being ranked #5. That's just fine with me, since Corso has worn the Hairy Dawg head 3 times, and Georgia is 0-3 in those games. I swear, dude, if you pull a switcheroo and pick the Dawgs this coming Saturday... I'll never forgive you. (Feel free to put Uga onstage again with you, though, and tell him he's ugly. I can't get enough of Russ/Uga IX.)

6) Damian Swann and Whoever Else Will Be Starting in the Secondary - I'm getting cold sweats just thinking about our secondary, which has the least experience returning of any position group on the field. Damian Swann will be our rock, but to go beside him, we apparently will be starting Connor Norman, who is a former walk-on. No offense to Norman, but we just don't have the talent there that we had last year, and virtually nobody other than Swann has significant game experience. We have a couple of JUCO guys, but they've never played in an SEC game or in a hostile stadium like Clemson's Death Valley. Tajh Boyd and Sammy Watkins have got to be salivating at our dearth in the secondary. These men need to find a way to step it up.

7) The Defensive Line - We struggled to stop the run at times last year, and that was with huge guys like Big Bad Jon Jenkins and Kwame Geathers, who were sometimes both in the game. We don't have a huge gap-clogging presence like that this year, and in this first game we're going up against a mobile QB who loves to take off with the ball. We've got a big JUCO guy in Chris Mayes to anchor the middle, but as with our JUCO's in the secondary, he has no major college experience. Will he respond positively when 80,000 orange-clad fans are cheering for him to screw up? And the Right Reverend Ray Drew will undoubtedly be tasked with containing Boyd on the outside, but successfully accomplishing this task will require Drew to step up and perform at a higher level than he has during his previous two years between the hedges. There are just so many question marks... I've already chewed my fingernails down to the nub. I might show up on Saturday with bloody fingers.

8) The Clemson Tigers - For all my pessimism and hand-wringing, I'm still a Georgia fan, dangit. The Loveliest Little Village With A Lake is only 90 miles from Athens, so the Dawgs will be well-represented in the stands on Saturday night, and in the tailgates on Saturday afternoon. Their cocky cousins from the bad Columbia will not be visiting this year, so we are the only SEC team that the Fort Hill Felines will host in 2013. Bulldog Nation will descend upon the shores of Lake Hartwell loudly and proudly, and we will remind the Tigers that when you meet the Georgia Bulldogs, you gonna feel the Bulldog bite.

(I admittedly overuse this video in my posts, but this occasion is quite possibly its most appropriate use, since the heyday of the Georgia-Clemson rivalry occurred when this song was brand spankin' new.)

(Also... no, I didn't forget you, Students-with-Tickets. We'll be seeing each other again next week, before our first home game.) Enjoy this week's build-up to the return of college football, and if you see Greg McGarity, remember to tell him... "Only you can prevent orange ceasefires."