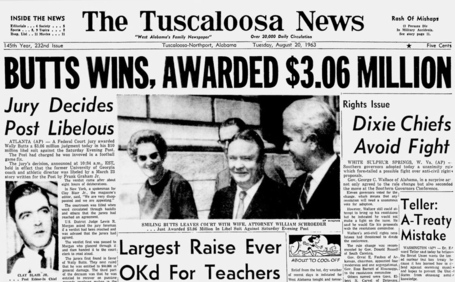 On this date 50 years ago, an Atlanta jury awarded Georgia Athletic Director Wally Butts $3.06 million in damages for a story published in the Saturday Evening Post that alleged he and Alabama head coach and AD, Paul W. Bryant had conspired to fix the 1962 game between the two teams. Butts, who had lost his job as a result of the scandal, eventually collected $460,000.

Soon after the judgement Bryant settled with the Post for $300,000. In his autobiography, Bryant said the strain of the experience had "taken 10 years off my life."

In 1986, James Kirby, who had attended the trial as an observer for the SEC, penned a book on the case, Fumble. Dawg Sports' own T. Kyle King produced an exhaustive and withering analysis of both the case and Kirby's book for Roll Bama Roll in 2010. If you want to learn more about this tumultuous episode in the history of Georgia and Alabama football, you would be hard-pressed to find a better place to go.

That said, if you want to know more I have dug up links to some of the better source material (including the Associated Press story of the verdict you can get by clicking the newspaper headline above):