2 Dawgs in the Hunt for the US Open

2 UGA players will go after the USGA's prized crown of the US Open.

Share All sharing options for: 2 Dawgs in the Hunt for the US Open

The US Open golf tournament is this weekend, being held at Merion Golf Club, in Ardmore, Pennsylvania. The last time this venue was used was in 1981. It's a fairly traditional, parkland style course, and with a very high level of maintenance and recent rain, it is very green and lush. You may actually know this course even if you don't follow golf because of this one particular photo, which is an iconic moment of golf and a poster in every 19th hole bar: 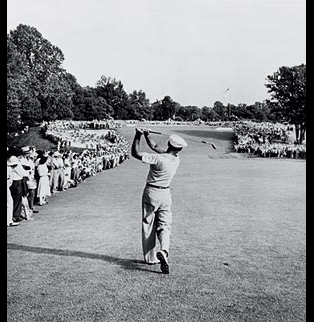 I believe Merion sets up better than the analysts think for Bubba. It doesnt have the Par 5s for him to destroy, but it does have some angles he can play in his unique eye, and the USGA is talking like they are going to keep the course softened up a touch which will allow the long hitters a little more freedom. I also just feel a parkland style course is where he is comfortable. Russell Henley has picked his way up the PGA latter to a world 60th ranking, and has shown a steadily improving game at the highest level.

I have had a lot of issues with the USGA and the US Open in the last decade. In their desire to make even par a good score, they have made some ridiculous golf holes, turning short par 3s into nightmares and fairways so hard and fast the ball would run through into impossible rough. And they have also tinkered with moving tee grounds around to very funky and unorthodox positions, all of which made for bad golf, rather than tough golf. I am hoping they can accept that scoring a few under (or even 3 or 4 under) a round through the weekend is ok, giving us a chance to see some good birdies, and enjoy the US Open. Let's hope for the UGA boys to make the cut and give a run through Sunday. Dawg Sports will keep you posted if our men climb the leader board. And with more Majors with three UGA players on the way....