2012 Season In Review: The Capital One Bowl

Georgia whipped Nebraska in a very entertaining New Year's Day bowl game. In what was one of the best passing performance of his career, Aaron Murray shredded what was supposed to be the strength of Nebraska's defense: Their secondary. This game turned out to be a disappointing consolation prize in the grand scheme of things, but beating a program with the pedigree of Nebraska will always matter. If only for a moment, the Dawg's 45-31 victory soothed what ailed us...

Share All sharing options for: 2012 Season In Review: The Capital One Bowl

By looking at this map, how far do you think it is from the site of the ancient Citrus Bowl in Orlando, home of the Capital One Bowl (A) to Dolphins Stadium (B) in Miami Gardens, home of the BCS National Championship Game? 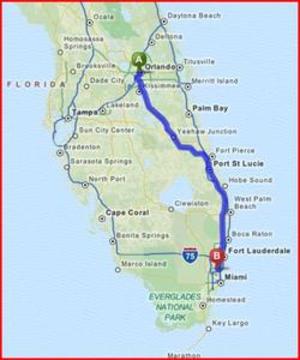 Vineyarddawg did a fine job in sharing his personal experience and pretty much expressing what we all felt early last December's loss to Alabama in the SEC Championship Game. In his post-game comments, Nick Saban correctly stated that it was a shame that Georgia could not get a bid to a BCS Bowl - and that is a fact. What Georgia did receive was an invitation to play one of the most storied programs in the history of college football as the Nebraska Corn Huskers would be chosen to represent the B1G in a very attractive match up.

There are not many programs out there that I have admired more than Nebraska over the years. For a quarter-century as head coach, Tom Osborne did things the right way and Nebraska fans are good people. In fact, I've got a bunch of 'em on my l'il sister's side of the family, so bragging rights belong to me until the next time we hook up with that squad from Lincoln. And I did try to convert them all. In fact, I'm still trying.

Bo Pellini's Husker's, still stinging after their utter annihilation in the B1G Championship game vs. Wisconsin, tried to do what his brother Carl couldn't do earlier in the year: Tame the Dawgs explosive offense. Despite the fact that Georgia was a 9 point favorite and Nebraska had yet proven it could stop quality offenses throughout the entire 2012 campaign, I still felt uneasy about this one. Would the hangover from only a few weeks removed still linger? Would a slow start against an offense that could certainly put up points get us in a hole? Would 'Bama beat us twice? All very real concerns.

A confession: I had a chance to go to this game. Orlando is about a 3 1/2 hour drive up the Florida Turnpike for me. Earlier in the year I began a little "trust fund" because a more significant game was being played about :30 minutes south of where I live in Dolphins Stadium. I was hoping...and my hopes were high...that I could entertain some family and take a "staycation" if the Dawgs found themselves playing in the BCS Title game. Alas, my trust fund was ultimately spent on groceries and tires. Honestly, I just did not have the heart to make the trip up to Orlando and opted for the couch and a few cold beers, hoping the Dawgs would show up if I couldn't.

The game started out well enough. Shawn Williams promptly blocks a Brett Maher punt and no less than SIX Dawgs would touch the ball before it rolled out of the back of the end zone to put us up 2 - 0. During that play, I could hear Larry Munson's voice in my head and a distant call from a game against Tennessee many years ago came to mind: "We fumbled it...we fumbled it again...we fumbled it again...SOMEONE GET ON THAT BALL!"

No worries, though. After Nebraska punted to us following the safety, Aaron Murray promptly hits Arthur Lynch on a 29 yard touchdown pass. This game was beginning to resemble last year's bowl game against Michigan State, at least in the way it started.

Nebraska responded quickly with a drive of their own to cut the lead 9 -7, and when Murray threw a pick-6 on Georgia's next possession, that queasy uneasy feeling started to settle back in. Huskers up 14 - 9.

When the Georgia got the ball back, we did what we have been doing all year long: quick score. Aaron Murray hit Tavarres King on a 75 yard touchdown strike on first down. It's our favorite play here at Dawg Sports, and it was truly Bobolicious. Murray was torching the "strongest" part of Nebraska's defense - their secondary. Dawgs on top 16 - 14.

Georgia extended their lead to 23 -14 when Todd Gurley rips off 24 yards and a touchdown early in the 2nd quarter. Now we're cooking. However, Nebraska responds with a field goal, Georgia's ensuing drive stalls and the Huskers score on a rather disturbing 6-play, 74 yard touchdown drive to go up 24 - 23 at the half.

Maybe I'm glad I sat this one out. Blasphemer, I am.

The start of the 3rd quarter had me reaching for the Maker's Maalox. The Huskers methodically drove 75 yards in 13 plays to extend their lead 31 - 23 and I'm convinced Bama will beat us again. The defense should have adjusted by now. And it's the last time we'll see this bunch together.

Then, the defense wakes up and the offense takes, well, offense. Georgia scores after a Nebraska punt on a Murray to Chris Conley 49 yard touchdown pass and converts the two-point try. Tied, 31 - 31. It is a day of big plays.

On Nebraska's next drive, Alec Ogletree gives us a going away present when he knocks the ball loose from Ameer Abdullah and recovers the fumble he caused at our own 38. This is Nebraska's last legitimate scoring threat of the day.

After a few exchanged punts, Georgia scores to take the lead for good on a beautifully improvised play. Murray rolls out of trouble, points to Keith Marshall who disengages a blocker and scoots down the sideline. Murray hits him in the corner on a nifty pirouette pitch and catch for a touchdown. Incredible presence of mind for Marshall to do what he did. His receiving skills are something I want to see more of in 2013. Dawgs on top, 38 - 31. It's glorious...

Keith Marshall. He can catch the ball.

After another Nebraska punt, Georgia got the ball back deep in their own territory. They didn't waste any time doing what they do. It's a beautiful thing...

Murray to Conley, 87 yards on 2nd and 13. Methinks we're going to see some more of this in 2013. Conley had himself quite the ballgame against Nebraska, with 2 catches for 136 yards and 2 scores. That'll raise your average. Tavarres King went out on top, hauling in 3 catches for 104 yards and a score. Justin Scott-Wesley gave us a preview of things to come with 3 catches for 67 yards. Murray certainly spread the wealth and this is one of the things that makes him so effective.

Statistically, Aaron Murray had quite the day, too. 18/33 for 427 yards, 5 touchdowns and 2 interceptions. Todd Gurley rushed for 125 yards, Keith Marshall added 36 on the ground and Georgia rolled up 589 total yards to Nebraska's 443.

This game was perhaps closer than it would appear, but once the defense "showed up," the outcome was never in doubt. I love a great offense, but I love a great defense. This game encapsulated the entire 2012 season from a defensive standpoint. We gave up yards and points early, but finally made the adjustments to secure the victory.

I guess in the end, I am glad I stayed away. I will say this: I've started a new trust fund because sooner or later we're going to win the whole damn thing...and I will be there.