On a cool but nice day in Athens on November 24, 2012, Georgia dismantled Georgia Tech 42-10 with my in person approval.

I watch so many Georgia games on tv that seeing this one in person was quite an experience. RedCrake walked me through the ways of how to park and catch a bus, and we acquired decent seats and said hello's to vineyarddawg and a few others, which was already a good day for me. It was the first time I had seen the new 100 trillion dollar scoreboard, you know, the one we can buy out right while we do a fund raiser to put shiny revlon lipstick on the pig of Foley Field....

Back to the story of the day/week that we have to keep in mind. Georgia had sealed the east and was litterally two wins away from a trip to the BCS CG. We all knew 'Bama was around the corner and we all wanted a Georgia team playing on full throttle to take us to the promised land. The national spotlight and attention was there for a game that was expected to be an easy win, because, well, we wanted to know what Georgia team was finally here to head to Atlanta. But, we still had to put little brother back in his place.

It was a cool day and sunny, but not uncomfortable as Sanford filled and the butt kicking commenced. In many ways, this game made up for what should have happened against Kentucky. Georgia played solidly on all fronts, knowing the Paul Johnson geniusly led triple attack would get yards, but the key was a little bit of bend but don't break,and wow, we sure did. As I have told you, we killed them, the game was a rout, we all had fun, and the score was 42-10. So, check out these stats.... 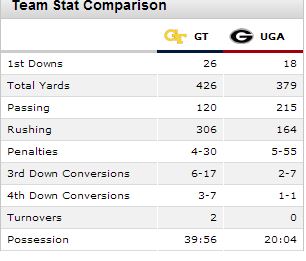 Wait? I just told you Georgia killed Tech. But look at those numbers: GT had more first downs, more total yards, almost twice the rushing yards, almost half the penalties, more 3rd down conversions and 40 to 20 minute time of possession! PAUL JOHNSON MUST BE A GENIUS! There is clearly no way that Georgia could have won this game so hugely.

So how did we do that? Well, first, this is exactly what you want to do against that triple option attack, slow it, stop it and run our highly effective offense. And as we start peeling away the stats, we see one that stands out is 3rd down conversions. We simply didnt have that many attempts. Which means we were gaining on big plays routinely. So, let's look at our players: 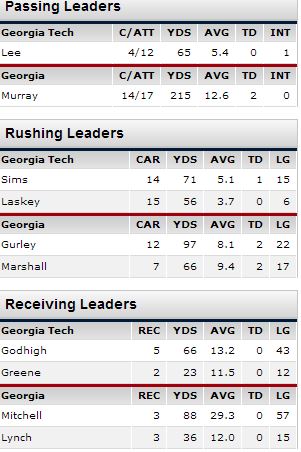 Aaron Murray had an almost flawless day, ripping off 14 rails and 2 TDs with little problem. And although the Gurshall combined for a lowly (by our standards) 163 yards, look at the average, with 8.1 and 9.4 yards average per carry, the Gurshall was basically picking up a first down a touch. And along with the thunder and lightening, the fire and ice of Murray to Mitchell was right where it needed to be. Let me tell you....I have watched the heck of out Mitchell, got severely upset when we toyed with putting him on defense, and I got to see the long ball of the day, a 57 yard pass right in front of me. The Mitchell is fast. Damn fast. This was an offense that was hitting every cylinder with no problem eating up the field and putting the ball down on the paint and re-racking.

It also helps when the special teams are on point. Paul Johnson, genius, opted to kick a short kick to Malcom Mitchell to open the game who quickly cruised by most of the field to return it to the Tech 45. It almost seemed at that point we were full bore, and never looking back. And, much to the love of Dawg Sports, TE Jay Rome was hit on a red zone pass for a TD and TE Arthur Lynch was involved for three pitch and catches all for good gains. The youtube video below has a nice summary of what can only look like total offensive domination.

The defense gave up some yards, however, that's going to happen on the triple option. We stopped their deep threats and prevented the big play. We forced them to 17 third downs and they only converted 6. We were aggressive and ready.

In the end, it was a great day in Athens, with the buzz about the trip next week to Atlanta on tap, demolishing Tech, and leaving everyone in good spirits and looking forward to next week to fight the Alabama Crimson Elephants. And for me, it was the first home game in many a year, which was a blessing. Until next time... 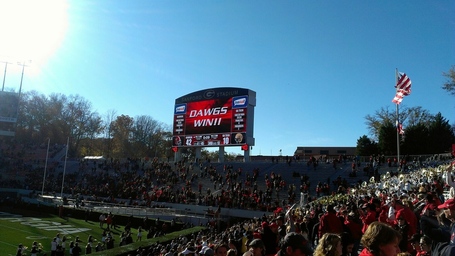 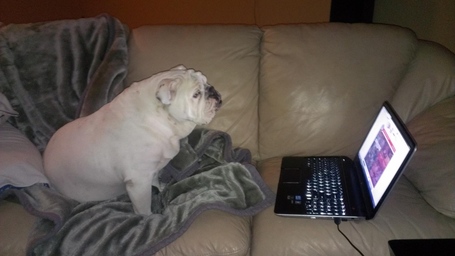