Beating down a cupcake is one thing. Crushing your oldest Conference rival in their back yard is another...I don't care how bad they are. Georgia thoroughly dominated Auburn in all phases of the game pitching their first shutout against the WarTiglesMen since 1976. As vineyarddawg hates Florida "with the fire of a thousand suns being fueled by the fire of an additional thousand suns," I hate Auburn with the water pressure of a 1000 water hoses multiplied by the pressure of an additional 1000 water hoses. That's a lot of water pressure. I hate Auburn.

Share All sharing options for: 2012 Season in Review:  Abruun

Georgia, having dispatched Ole Miss the previous weekend, took the familiar bus trip down I-85 to the Loveliest Village with the SEC East title at stake. Waiting for them was a horrible Auburn team only 2 seasons removed from an improbable* BCS National Championship. At this point in the season, the Tigers only had victories over Louisiana-Monroe and New Mexico State and the fates of the entire coaching staff had probably been decided a few weeks earlier when Texas A&M annihilated Auburn in Jordan-Hare stadium 63-21. Jay Jacobs was undoubtedly already making arrangements with Gus Malzahn and Rodney Garner; Gene Chizik was negotiating with ReMax. Still, this is the Deep South's Oldest Rivalry being played at their house.

Despite the fact that Georgia exacted a modicum of revenge on in 2011, smoking the Tigers 45-7 in Sanford Stadium, the memories of Auburn's victory in 2010 and the cheap shots by certain players who have since moved on is something that will not - nor - should not fade. That was as dirty a game by as dirty a team as there has ever been. The point is: Beating Auburn has been and will always be special.

#5 Georgia seized control of the game from the opening coin toss, winning it and deferring to the second-half. Auburn promptly went 3 'n out and the Dawgs, starting on their own 20, drove the length of the field in 6 plays to take a 7-0 lead. The key play was a Todd gurley 49 yard run down the sideline, nearly pulling away from a defender. Chris Conley caught an Aaron Murray pass for a six yard score.

Georgia would go on to score touchdowns on their next 3 possessions:

At this point, much of the announced crowd of 86,146 had seen enough as many of the Auburn faithful headed to the exits and into the chilly night. Evidently it was vomit-bag night at Jordan-Hare with many of the patrons deciding to put the novelty item to a different use than was originally intended. 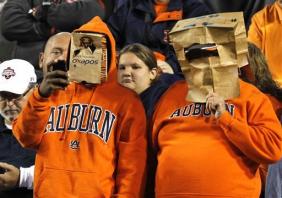 This is a good look. 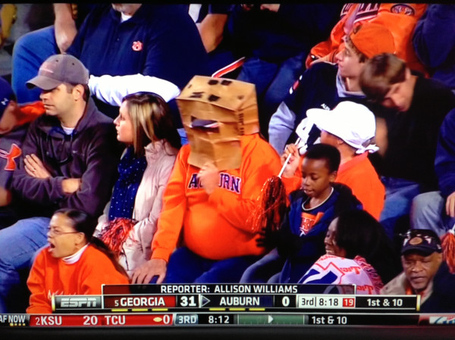 The Dawgs would take the 2nd half kickoff and promptly drive 73 yards in 15 plays, only to "settle" for a Marshall Morgan 20 yard field goal. The key player was Todd Gurley, rushing for 39 yards on this particular drive. Dawgs 31 - 0.

Auburn would do on their very next drive what Auburn did a lot in 2012: Strategically drive under the required 10 yards to generate a first down and punt the football. Conversely, Georgia did what it did a bunch in 2012: Score as fast as you could say "Gurshall." Georgia would close out the evening's scoring when Keith Marshall would burst virtually untouched for 62 yards on third down.

Personally, my favorite play was Christian Robinson rocking Tre Mason at the 1:13:20 mark... Loves me some "D"

Midway through the 3rd quarter, Richt decided to literally call off the Dawgs. The game was in hand, Auburn would finally mount their deepest threat midway through the 3rd quarter as they put together a 60+ yard drive, only to fumble on the Georgia 11 when Shawn Williams would knock the ball loose from Emory Blake after a pitch and catch. Mike Gilliard would recover and effectively preserve the shutout...for the first time since 1976. I've only been to 2 games in Jordan-Hare: The aforementioned '76 contest won be Georgia 28-0 to clinch the Conference Championship and the 1986 upset when the Dawgs stunned the Tigers 20-16 - also known as the Water Hose game.

It's a unique thing. It's like playing against your brother. I don't think anybody who plays in that game can ever forget it. It just doesn't matter much where it's played or what somebody's record is. It's so intense and tough, but at the same time, it's family.

I think this is what you would call a friendly rivalry. Both places are good schools, good places. Both of them have good people. That's what makes it special.

To hate Auburn is to know Auburn and we've known this rival longer than any other. The series is now tied at an incredible 54-54-8, with Georgia having won the last 2 in blow-out fashion and six of the last seven meetings. Mark Richt is now 8-4; a number that should improve. One of the by-products of Conference expansion means we will again travel down I-85 in mid-November to hopefully in position to clinch another berth in the SEC Championship game.