Harry Gator And The Prisoners Of Alachua.

Share All sharing options for: Harry Gator And The Prisoners Of Alachua.

Quick show of hands, anybody here who'd like to have a good reason to doubt the decision making ability of Florida Offensive Coordinator Brent Pease? That's what I thought. Here ya go: 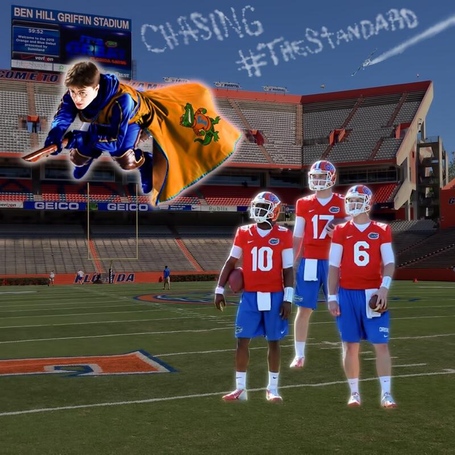 That's the photoshopped picture tweeted by Pease this morning. Apparently he wants his players to be more like Harry Potter. Or he's trying to convince Jeff Driskel to read more. I don't know, but either way it's freakin' hilarious. Mike Bobo, reached for comment dismissed the tweet as "fake pollyjuice" and offered that if Pease really wanted to motivate his players he'd threaten them with compulsory babysitting duty.

And while I agree with Bobo's reaction, there are other questions that fairly scream to be answered here:

Once again, the Will Muschamp era at Florida continues to please me to no end. Carry on, Comrade Muschamp. Fellow Bulldogs salute your covert efforts to destroy Florida football's 23 years of tradition. Until later . . .