How to Follow the Net Dogs: A College Team Tennis Primer

A few weeks ago, vineyarddawg gave us an excellent summary of collegiate gymnastics and how it differs from gymnastics competition at other levels. We thought it would be a good idea to offer some of the basics of some of UGA's other sports. Since Georgia's men's and women's tennis teams are getting started in the SEC tournament today (the women are under way as I write), how about we take a look at team tennis in the NCAA?

First, allow me to give you my impressive tennis bona fides. When I was eight years old, I took a few weeks of beginners' tennis. A good friend who started lessons with me went on to national juniors' rankings and to play for a Division I school. When I was in college and law school, I attended the NCAA men's tournaments in Athens and saw Georgia win our first two national championships. My father was on Dan Magill's first Georgia team in 1954. Here's the part where I tender myself as an expert. No objections? Good. (I am not an expert.)

If you take a look at the Georgia men's and women's schedules, you'll see that tennis is played pretty much year-round. In the fall, the schedule is not so tight and consists primarily of smaller invitational tournaments, mostly built for individual singles and doubles pairs and not school teams. Team play gets under way in earnest in January and lasts through the NCAA tournament in May.

From January into April teams in the SEC play a round-robin schedule plus some out-of-conference meets scheduled by the schools. Traditionally, we play SEC matches on Fridays and Sundays (with occasional variation) plus just a few midweek non-conference matches. This season, as has been the case for several years, the SEC schedule is set up so that on any given day on the schedule, the men from two schools are playing at one of their campuses on the same day the women from the same two schools are playing at the other campus. It works out nicely.

So how does a team win? Division I team tennis follows what's called the 3-6 format: three eight-game pro set doubles matches (with a 12-point tiebreak at eight-all) and six best-of-three-set singles matches. There are seven points up for grabs in a dual meet. One point is awarded for doubles play, and six points are available in singles play. The team with a score of four or better wins. Each team offers three doubles pairs, and the team that wins two of the tree doubles matches wins the lone doubles point. Each team then puts forth six singles players, and each singles match is worth a point. The coaches select the lineups. The players in the doubles lineup can be different from those in singles. We typically refer to the individual matches and players by where they are in the lineup, e.g., "number one doubles" or "number four singles".

In SEC meets during the regular season, if one team wins the first two doubles matches to finish, thereby winning the point, the third match remains unfinished unless both coaches agree otherwise. If a team wins four points while singles matches remain unfinished, the team with four points is declared the winner and the remaining matches remain incomplete unless the coaches have agreed otherwise before the beginning of play. This is why you might see a 7-0 score in one meet and a 4-1 score in another. By rule, the doubles matches are played before the singles matches, but we saw one occasion this season when the singles matches (and its six available points) was played first because there was bad weather approaching, and the coaches were concerned play couldn't be completed. By playing the singles matches first, a winner could be determined earlier in case weather forced suspension of play. I don't remember any other occasion where that's happened.

Every SEC school and most (if not all) Division I schools have live scoring available so you can watch the scores of the matches in progress. Many schools have streaming video feeds. You usually can find a link to the live scoring at www.georgiadogs.com or, for UGA's away matches, the host program's site. UGA also offers live chats (linked at georgiadogs.com) for home events and major remote meets (like the conference and national tournaments)

For scoring illustration purposes, here's the final summary of the UGA men's 5-2 win over Bama. 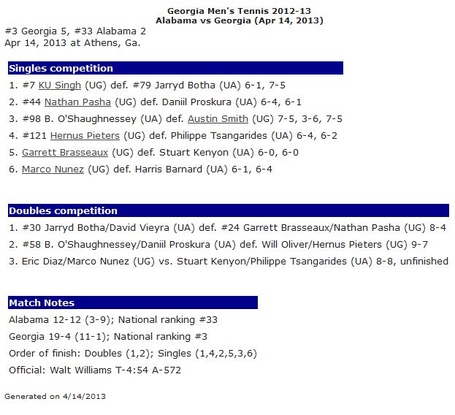 Compare that to the women's 4-0 win over Bama, which includes three unfinished singles matches. 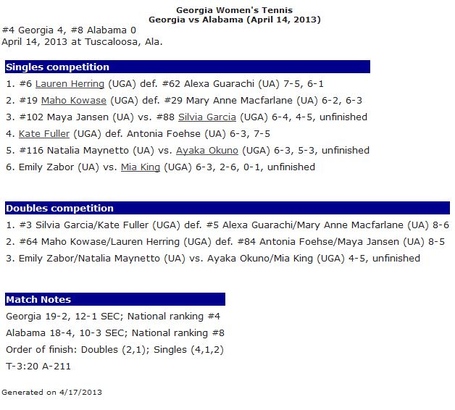 A regular-season champion is named based on over-all conference winning percentage.

All conference teams participate in the SEC tournament, a single-elimination tournament held three weeks before the NCAA tournament. The site rotates among SEC members. This year, the women are in Starkvegas, and the men are in Oxford. The teams are seeded one through thirteen for the men and one through fourteen for the women based on conference record regardless of division. Due to scheduling, unfinished matches within a head-to-head meet are suspended when a team gets to four points. This year, with the expanded membership, there was a limited first round (one match for the men and two for the women) among the lowest seeds to narrow the field to twelve teams, the top four of whom get byes until the quarterfinals while the remaining eight play the second round to get us down to eight total. Play proceeds until we have a champion, who by Conference rule is the SEC's representative in the NCAA tournament.

The NCAA tournaments (men's and women's) consist of 64 teams each, approximately half conference champions and half at-large bids. There's even a selection show! As with the SEC tournament, each head-to-head meet is played only until one team clinches with four points. The top 16 seeds each host the first two rounds, and the 16 advancing winners head to the host site for the quarterfinals through the championship, after which individual singles and doubles pairs tournaments are played at the host site. Beginning in 2014, however, after the first two rounds, the advancing 16 teams will go to four regional sites, each producing a winner after two rounds, and only the remaining four teams will go to the national host site to play the remaining rounds followed by the individual singles and doubles championships. We hate this because it drastically cuts down on the amount of tennis played at the host site and the number of teams who get together at a single location. It's a big deal for the players for their teams to make it to the final site. But the NCAA thinks it will expand exposure. [My thanks to Bill Mc who advised in the comments below that, while this change was proposed, the NCAA decided to maintain the existing format for 2014, so we'll still see sixteen teams per tournament (M and W) congregate at the host site for the final four rounds.]

For 2013, the men's and women's final rounds will be in Urbana, Illinois.

The Intercollegiate Tennis Association (ITA) publishes team, singles, and doubles rankings. The first team rankings (1-75) are published in early January, and updates are published weekly through regular season and conference tournament play. The first six rankings of each year are determined by a vote of the ITA National Ranking Committee. Each spot in the rankings gets a point value (#1=106; #2=102; #3=98; etc.). (For a complete list of the point values and how they work in the formula (good luck with that), see the 2012-2013 ITA Rankings Manual, brought to you by Campbell's Soup.)

Beginning with the seventh ranking, the computers take over, and it's extended to 125 teams. From that point until the last ranking before the NCAA tournament, a team's rank is determined by taking a team's best wins to date (up to a specific number that increases as the season progresses -- it starts with four) with deductions for all losses (the lower the rank, the greater the deduction). The most recently published ranking is used to determine the opponents' point values, regardless of where they were ranked at the time the match was played. Road victories (but not neutral site wins) earn a bump in the formula. A final ranking is published at the conclusion of the NCAA tournament. The tournament winner automatically gets the top spot, regardless of the formula. Bonus points are awarded for tournament wins.

Ranking singles and doubles is done similarly, but the rankings are published less frequently and the point values for wins and losses are different. Only the first, pre-season ranking (in September) is done by committee vote. The next ranking isn't until January from which point only the formula is used and includes fall play.

In team, singles, and doubles rankings, the margin of victory does not count -- only whether it was a win or loss and the quality of each win and each loss based on the opponent's rank (which is, in turn, based on the quality of its wins and losses, etc.).

That'll do, yes? If I made any glaring omissions, ask away in the comments, and I'll do my best to give you an answer, even if I have to look it up.

Now, head over to the UGA women's SEC tournament round against Ole Miss, where our ladies just clinched the doubles point for a 1-0 lead.