We thought it had been a rough day. We've been absorbing the not-too-surprising news of Kentavious Caldwell-Pope's declaration for the NBA draft, and then we get the news of an actual tragedy: someone (or some group) tries to make some kind of statement by killing and maiming scores of innocent people at one of the Boston Marathon, one of the world's great sports traditions. We're thinking of the victims and their families and the great city of Boston and wish them peace and healing. In light of these events, I'm skipping my attempt at tax day humor and getting straight to the task of catching up with the Bulldog scores and news.

We do have some good news to discuss.

The men clinched the outright regular-season SEC title last weekend, but the women still had work to do. Friday, Georgia took care of business at Auburn, defeating the Wareaglesses 4-0. Sunday's match against Bama in Tuscaloosa was expected to be a bit more of a challenge. The eighth-ranked Tide only recently left the first-place snarl with UGA, UF, and TAMU when they got their second conference loss in College Station on 7 April. Honestly, I was a little worried about this one. But the Bulldogs came through with a 4-0 win and, as a result, secured the program's ninth regular-season championship and 15th overall, sharing the honor with the Gators and the Aggies.

The SEC tournament starts Wednesday in Starkvegas. Because the three-way tie could not be broken by head-to-head results, the folks in Birmingham drew for the tournament's top seed, and Georgia got the spot with A&M second and Florida third. Here's your link to the bracket. By virtue of the one seed, Georgia gets byes for the first two rounds and will play the winner of Thursday's match between 8 South Carolina and 9 Ole Miss on Friday morning, bright and early at 8:00.

Georgia hosted multiple events over the last several days: the Bulldog Decathlon Thursday and Friday and the Spec Towns National Team Invitational and Bulldog Heptathlon Friday and Saturday. UGA's Lucie Ondraschkova took the heptathlon title with 3,310 points. In the decathlon, Bulldog Maicel Uibo won first place with 8,223 points in his first collegiate entry into the event, and teammate Garrett Scantling took second with 7,824 points. Uibo's is the highest decathlon score in the world so far in 2013; it set new Spec Towns Track and UGA records, qualified him for the 2013 IAAF World Championships in Moscow this August, and represents the 11th best score in NCAA history. Wow. Now, I admit I have somewhat of a tennis bias, and I also wanted to give featured photo status to the women's tennis team in honor of their coference championship. But I had a hard time saying no to this guy's performance, so here's Uibo. 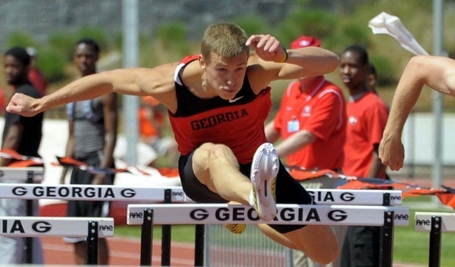 And there's more. Each week, the U.S. Track & Field and Cross Country Coaches Association (USTFCCCA) names National Athletes of the Week. It's a new honor the Association started during the 2013 indoor season, but Georgia had not had an athlete named until this week, and true freshmen swept the awards: Uibo got the nod for National Male Athlete of the Week after the above-described phenomenal decathlon performance, and Shaunae Miller was named National Female Athlete of the Week after clocking 2013's fastest 200-meter dash at 22.41. Go Dawgs!
The Bulldogs head to the Plains for the War Eagle Invitational Friday and Saturday.

Once again, Georgia handled its mid-week opponent, defeating Western Carolina in a Wednesday doubleheader 12-0 and 9-0, but got off to a tough start in the weekend's SEC series, losing at South Carolina 6-2. Thankfully, UGA not only avoided being swept by its third consecutive conference opponent, but the ladies took the series with a 7-6 win Saturday and a 2-0 win Sunday. With a five-game batting average over the week of .412 while batting in half of UGA's 32 runs in those games, Geri Ann Glasco was named SEC Freshman of the Week for the third time this season. Georgia hosts USC Upstate Wednesday evening then welcomes the Aggies to Athens this weekend.

Our 2013 SEC champs finished up the season by notching their ninth and tenth consecutive victories with wins over Auburn Friday (4-0) and over Bama Sunday (5-2). Georgia has a 12-0 home record this season. Sunday's lineup was a little different as our No. 1 doubles team was given some rest and several guys were hit with a stomach virus. We need them healthy this week for the SEC Tournament in Oxford. With the No. 1 seed, Georgia won't have to play until Friday, when it plays the Kentucky-Mississippi State winner at 6:00 p.m.

In alumni news, John Isner won the U.S. Men’s Clay Court Championship this weekend, with a record 64 aces over the course of the tournament.

Surprising no one, Georgia dropped the first of three games against Tech Tuesday, 7-5. Then Friday, while the tennis teams were handling their Auburn counterparts, the Diamond Dogs had a chance to join in the Tiger-beating fun on the Plains but fell short 4-3. Saturday, Georgia secured its fifth SEC series loss in five tries by losing 8-4, but avoided the sweep in a second game Saturday by dominating the Plainsmen 7-1. The Dawgs were swept by A&M and Bama but have taken one game each from Kentucky, Mizzou, and Auburn. Progress?

In addition to the upcoming events noted above, it's a big week for our equestrian and gymastics teams as they compete for national championships. We'll have coverage here, of course.

And finally, we at Dawg Sports also want to give a BIG congratulations to Georgia's Club Tennis Team, who won the USTA Tennis On Campus National Championship by defeating the Florida Gators.