With almost all hope of post season play fading, a big win could spark some motivation heading into the SEC tournament.

Share All sharing options for: UGA vs UK Pregame Preview

Georgia faces Kentucky in the Coliseum at 7:00pm AST* this Thursday, March 7. The game will be aired on ESPN and ESPN 3. When the Wildcats come to town, we often face a situation of a sea of blue where there should be nothing but red and black. And when you get down to it, what you want to know, is a win against the Kentucky Felines even possible?

Kentucky has been a slightly different team in the last weeks with Freshman star Nerlens Noel out with a torn ACL. They have won for the most part, but they have taken losses against Florida, Tennessee (hahahahah) and Arkansas as of late, along with tough battles against ATM, Vandy and Mizzou. They aren't the highly polished for sure final four bound team we all fear. They have some bad losses. Right now their RPI puts them at 51st, and they need a strong finish in the regular season and SEC tourney to regain some momentum.

Georgia, however, has taken on a string of scrappy, hard fought losses. Heartbreaking losses. But finally pulled a more complete game together with a win against Tennessee at home. A win that may have knocked UT off the bubble, much to the dismay of this fan. We have have knocked on the door without stepping through it so often in the last month it brings tears. Our chances of even an NIT are pretty low without an outstanding finish to the year. Here's the thing, however, this team has been fighting in game after game, doing it with little hope and virtually no fans, and this Thursday is a chance to make a splash.

You can anticipate The Wildcats to come out fast and hard, pressing early, and look to Archie Goodwin, one of their 800 Freshman all universe all stars, along with another all universe Freshman Alex Poythress shooting star to work a transition game along with good field goal shooting. Just like the 2008 SEC tourney, the Cats will come in thinking this one's in the bag. But that's not necessarily the case. Georgia has had some mild success, and darn near a lot more success, slowing down the game, playing a little ugly, and getting in teams heads. We also have our own super star, Kentavious Caldwell-Pope, who has, as of late, been having stellar second halfs to keep the Dawgs alive till the end. We will need him to have a total game in points and also assists. I have taken a liking to KCP driving hard and passing to set up an open man. We will need our own youngsters Kenny Gaines, Brandon Morris, and Charles Mann to step up from the bench, and hopefully get some good post up support from Nemanja Djurisic. We have shown we can do it; we just need to do it for 40 minutes.

I think we can anticpate Coach Mark Fox to go to what has become his more standard lineup, with Donte Williams, Vincent Williams, John Florveus, Morris and KCP, which I find bothersome as usually Florveus mishandles a ball or fouls in the first minute and is quickly taken out. That said, last weekend, Florveus put in a strong defensive effort against Tennessee.

Basketball IQ has killed us. We can ill afford the usual mistakes of a bad 3 point shot early in the shot clock, or failure to work the ball regularly to Caldwell-Pope. And maybe we need a touch of lady luck to come our way. Heck, we paid her our dues most certainly this year. And we need some home cooking - created by you, the Bulldog Nation, being loud in the Steg and with numbers filling the arena with red and black. Don't let these hillbillies come down to the Classic City like they own us! Pack the Coliseum! It's not an easy win, nor a given win, but it's a winnable game if we use a solid, rounded, team effort while cutting down on the stupid mistakes. So, can we win? 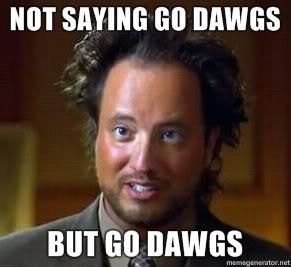