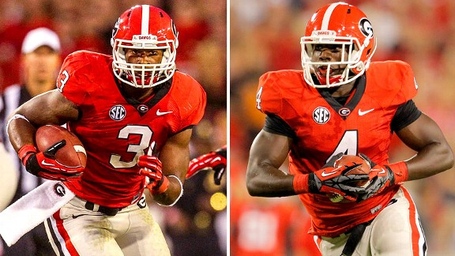 Since word recently broke that the Georgia football team is entering spring practice with only one healthy scholarship running back, Todd Gurley, the tailback situation at UGA has occupied my thoughts. Talent is not a concern heading into 2013 with the mighty one-two punch of Gurshall figuring to get the majority of carries and incoming freshmen A.J. Turman and Brendan Douglas learning from them and competing for their own playing time. However, depth is a huge concern, especially since proven backup Ken Malcome decided to take his talents to Southern Illinois in search of consistent playing time.

The best way to address insufficient depth is to hit the position hard in recruiting. Thankfully for the Dawgs, there are plenty of talented 2014 RBs within reasonable radii of The Classic City. Here are a few backs that I think the Georgia coaching staff should really focus on for next year's class:

Everything you need to know about Chubb you can find in MaconDawg's outstanding analysis here on Dawg Sports. I like Georgia's chances of signing him, but don't rule out Tennessee or professional RB collectors Alabama (half kidding). Chubb grew up a Dawg fan and shortly after he received the offer from his childhood favorite team, visited UGA twice in a three-week time span. He named Georgia as his leader last month.

Auburn, Florida, Georgia and Tech are all hot on Choice's trail early on in the recruiting process, but the Dawgs were there from the beginning. The four-star back claimed that his first offer coming from Georgia was an honor and he has since made multiple trips to Athens. Choice is related to former Tech RBs Tashard Choice and Joe Burns, but that's no guarantee that he'll end up at the trade school. According to Choice, Georgia has been his most active recruiter and has kept in constant contact since June. Choice claims UGA as the leader in his recruitment and speaks highly of fellow Thomasville native, offensive coordinator Mike Bobo. Georgia fans should love this guy because he is also a baseball star and would consider playing both sports at the next level if he can. Lord knows we need help on the diamond, too.

The good news for Georgia is that Michel, a five-star recruit from South Florida, has already visited Athens and described his visit as "great." The buzz around the Internet is strong that UGA is Michel's early leader and he has already narrowed his list of potential destinations down to five: Florida, Florida State, Georgia, Miami and Notre Dame. Michel says this top five will not change, so Ole Mi$$ can save their recruiting "momentum" for someone else. I like Georgia's chances of landing Michel on signing day 2014 if the coaches play their cards right.

Classified as an ATH but primarily an RB at state-champion Norcross, Autry is already being courted by a bevy of formidable UGA recruiting foes but has made a few trips to Athens already and seems to like what he sees. Autry lists The O-lie-o State University as his early leader, but he has capitalized on his hometown's proximity to Athens a few times already and these trips could ultimately work out in Georgia's favor as they did with former Kell standout Brendan Langley, once a South Carolina commit, in 2013.

Scarborough is currently committed to Alabama, but that should not stop Georgia from making a serious push for the four-star back out of Nick Saban's backyard. Scarborough is listed as an ATH, but prefers the RB position and is being recruited as such by an array of schools including Clemson, Florida, Georgia and Michigan. It is worth noting that Scarborough showed early interest in Georgia and visited Athens over the summer only to commit to Alabama in September. I refuse to view Scarborough as a lost cause- the Tide coaches sure didn't feel that way about one-time Georgia commit Derrick Henry last year. Bama's and Georgia's respective depth charts alone should be a huge selling point for the Dawgs. Alabama has been parading through our state and taking quality recruits for years and it's about time we return the favor. Scarborough presents the opportunity for Georgia to go on the offensive and take the recruiting war to Saban's front lines.

Georgia will likely sign anywhere from two to four RBs in the 2014 class. Two should really be seen as the bare minimum with the impending early departure of Gur-, -shall, or both, after the 2014 season. Keep in mind that Stanley Williams, a four-star back out of Bethlehem, Ga., is currently committed to the Dawgs, but Williams, who has been committed since Dawg Night 2011, has made it clear that his commitment to UGA has not been as firm since the departure of former recruiting coordinator Rodney Garner.

This is just a preliminary list and I expect other names to emerge between now and National Signing Day 2014, if they haven't already. If you are aware of anyone that you think should be on Georgia's wish list, please feel free to mention them in the comments below.