Ah yes, it is the changing of the seasons. The snow is melting, the air is warming (slowly), and the craft beer breweries have moved on to their spring seasonals. In the sports world, basketball is winding down, and baseball batting cages are busy with activity. In Braves country, people are starting to pull out their #10 Jones jerseys to start wearing around town. In Athens, Ga., however, there's a different sport preparing to hit the fields.

Spring Football Practice commences tomorrow folks! That time of the offseason where for just a few short weeks, us college football fanatics get to pretend that it's the Fall, and revel in the fact that practice for the 2013 has officially started. To some fans, this is only a tease, and an unimportant formality that will yield little actual results. But to the fans who know and appreciate the importance of spring practice, it is everything!

Looking at the Dawgs now, who must break in 9 new starters on defense and find some depth on offense, there really aren't enough practices. The good news is that Coach Richt outdid himself in the 2013 signing class by adding 13 early enrollees (among the most in the nation). Fans can continue to complain all they want about the lack of a stellar top 5 signing class, but the fact of the matter is that we settled for quality, and wisely got some of our most important recruits here early to jump right into the fire.

So, let us jump right in said fire ourselves and break down the top things to look for on offense and defense this spring. I've also included notes on what I'd like to see happen and who I think will emerge.

- Offensive Line Depth Chart: We all know that the Dawgs are returning one of the most explosive offenses in the country, and it'll be tested early at Clemson (most anticipated game in a while for me). However, we were fortunate that the only position that experienced injury or attrition was receiver last year, and not our young inexperienced O-Line. This year, we'll get a taste of how our depth looks right away with starters Chris Burnette and John Theus out of the Spring with surgeries. Enter Josh Cardiello and Aulden Bynum. While they could redshirt come fall time, they'll get their first taste of action and hopefully respond well. The rest of the line could also use more time to gel and move around so that they'll be ready for any scenario in the regular season

- Wide Receiver Rotation/Depth: This has the potential to be the most exciting position battle to watch this spring. Malcolm Mitchell and Michael Bennett are obviously the incumbent starters, and Chris Conley is the third guy who honestly is about to explode as a star. But after them, it gets a little foggy. Justin Scott-Wesley got some solid experience and made great strides in 2012, but is still a little bit of a project. Blake Tibbs redshirted, but coaches think his potential is through the roof. Rantavious Whooten is still there (experience but little production). And then there are the new kids, JUCO transfer Johnathan Rumph, Tramel Terry, and J.J. Green. What will make this competition interesting is finding out who will fill in for Bennett (still recovering from ACL). All of these guys have the potential to be studs, but aside from Mitchell and Conley, we don't really know how they'll do

- The Battle for 3rd String QB/RB: Ok, so the starters here are assured. Aaron Murray's going to shatter every school and conference quarterback record, and hopefully leave with a couple of rings finally. Hutson Mason will have to wait one more year to be a starter, but at least will see some time as the backup again. Christian Lemay, however, I'm not sold on. Enter Brice Ramsey. While he played in a primarily running offense in high school and didn't put up mind-boggling numbers, he's got all the tools to be the QB of the future. At running back, it's all Todd Gurley and Keith Marshall once the Fall rolls around. But for now, it's basically Gurley and...well...that's it. Marshall will miss significant time this spring with a hamstring injury, so the battle for depth in general rests on the shoulders of a former walk-on, Brandon Harton, and a current walk-on, Kyle Karempelis. With Ken Malcome transferring and A.J. Turman not arriving until the Fall, this battle will probably consist more of avoiding injury than providing depth but hey, it gives these guys their moment to shine.

- Who will be on the defensive line?: This will be one of the most interesting, yet subtle battles in the Spring. Of the 3 down linemen in Todd Grantham's 3-4 scheme...all 3 starters from last year must be replace. Having said that, the one returning with the most experience, DE Garrison Smith, is basically a starter as much as he played last year. When Abry .Jones went down with an injury, he stepped in nicely, and played solid for the most part. He could still use some conditioning to stay on the field for 3 downs, but overall, he's a stud in the making. The other end spot and the nose tackle positions are entirely up for grabs. Ray Drew and Sterling Bailey will be the guys duking it out for the DE spot. Things get interesting with the early enrollees John Atkins, Chris Mayes, and redshirt freshmen Jonathan Taylor. Atkins and Taylor should battle for the NT spot formerly occupied by John Jenkins and Kwame Geathers while Mayes is being considered more for DE.

- Jenkins, Herrera, and who else at Linebacker?: Ok, so everyone knows the next J.J. not officially named Jarvis Jones is already a star in the making. Jordan Jenkins started the second half of the season and came up big with 5 sacks and several tackles for loss. A solid spring under his belt will help him focus more and really get his feet up under him. He was so close to making so many more plays last year, but was sometimes a step too fast, or tried too much. Herrera has the most experience of any returning LB, and aside from adding a little more speed, is pretty solid overall. He'll be the real leader to look to. Other than those two, the other starters and the depth chart is up for grabs. Reggie Carter and Ryne Rankin were highly touted out of high school, and will get their shot at inside linebacker after enrolling early. On the outside, Ramik Wilson, Chase Vasser, and TJ Stripling will see who will start and who will backup.

- The Battle of the 3 new starters in the Secondary: Bacarri Rambo, Shawn Williams, and Sanders Commings all leave big holes to fill, and it's really an up for grabs battle to see who comes through. Damian Swann returns at one corner after a stellar debut season as a starter, but opposite of him, only two guys with any real experience return in the form of Sheldon Dawson and Devin Bowman. Reggie Wilkerson is an early enrollee who came pretty highly touted, so he'll get his chance early to make a name for himself. Safety is a real head-scratcher as Connor Norman is the only guy with any significant playing time returning. He landed 4 starts early last year with Rambo being suspended, but didn't have a whole lot to show for it. Corey Moore has been quiet so far in his career, and although coaches rave about Josh Harvey-Clemons's potential, he might end up at OLB. Enter Tray Matthews and Quincy Mauger. These two early enrollees should give the returning guys a run for their money. Matthews was very highly recruited out of the same Newnan program that gave us Alec Ogletree, and he's rumored to be of a similar mold. 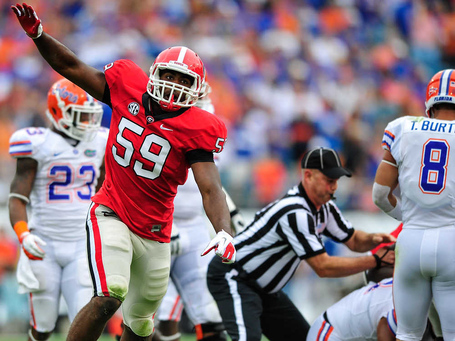