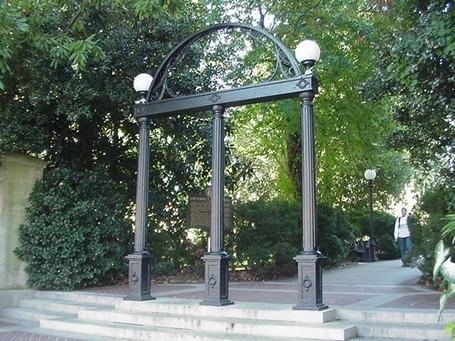 With the 2013 recruiting class signed, sealed and delivered, many Georgia fans, while ecstatic about the fine young men we have coming to Athens to represent UGA on the football field, are still scratching their heads over missing out on almost each and every signing-day target, including OL Laremy Tunsil, DL Montravius Adams and RB Alvin Kamara. While I prefer to look at this as water under the bridge and be excited and thankful for the kids we do have coming in, a part of me wonders, "What on earth did rival coaches tell these kids that ours did not?"

Since those kinds of conversations are typically kept between the coaching staff and the players and their families, I'm not even going to pretend to know what is said and goes on behind closed doors. What I would like to offer, however, are some selling points that may or may not come up in prized recruits' living rooms or in the halls and offices at Butts-Mehre. So why on earth would you play for Georgia over perennial recruiting rivals Alabama, Auburn, Florida, etc.? Here's how I would sell the program:

For starters, there's the football thing. Even though a national championship has eluded the program since 1980, Georgia has always prepared its players well for the next level. 39 former Bulldogs are currently listed on NFL rosters with that number sure to increase after the 2013 Draft. As of 2012, Georgia was tied for fourth place with Texas and Ohio State (and second only to LSU in the SEC) on the top 25 list of NFL-player-producing college football programs. Georgia can also boast more Super Bowl MVPs (Jake Scott, Terrell Davis and Hines Ward) than any other NCAA program. Since taking over in 2001, Coach Mark Richt has sent a consistent and remarkable flow of Georgia Bulldogs to the NFL. Eleven players from the 2012 team will make the trip to Indianapolis for the NFL combine later this month.

Oftentimes we overemphasize the "football" part of "college football." Georgia is pretty solid in the classroom, too. UGA was named a "Public Ivy" in 2012, which essentially means that students can get an Ivy-League-caliber education for a public school price. The only other SEC school that can claim this honor is Florida.

How does UGA separate itself from UF, its chief athletic and academic SEC rival, in the classroom? UGA placed 57 student-athletes on the SEC's fall academic honor roll, the second-highest in the conference. UF was not the highest; they placed only 46 on the list. If you haven't yet clicked the link, you're probably saying to yourself, "Yeah, well, Georgia is probably inflating that number with all their nerdy soccer and volleyball players. The football players would certainly drag that number down." Well, you'd be wrong. 38 of those 57 were football players and UGA ranked #1 in the SEC for football. This is more than second-place Vanderbilt's 36 and third-place Alabama's 29. You read that correctly: Georgia's football players outrank those at Vanderbilt, a private school widely regarded as among the best in the nation, in an academic category. Recruits have a fair shot at going pro in committing to Georgia, but they also have a pretty darn good chance of making it off the field, too, provided football does not work out.

UGA's track record speaks for itself in terms of both athletics and academics, but let me sell you on Athens. The Classic City is considered among the best, if not the best, college town in the nation. Having traveled around a good bit, I assure you its the most fun place to live in the SEC.

Seeing as how the town was built around the university after the latter was charted, Athens has always catered to students and professors. You can find great shopping, dining and night life in the aesthetically-appealing and affordable confines of downtown, located directly across the street from the Arch, the historical entrance to the University. Athens is known for its love of the arts and nowhere is that more evident than in the world-famous music scene. Sure, Athenians and UGA alumni hang their collective hat on classic homegrown groups like R.E.M. and The B-52's, but there is still plenty of music flowing from across the Arch. Bands like Drive-By Truckers, of Montreal and The Whigs continue to make the city proud and curry favor with music fans worldwide. Gainesville can boast Tom Petty; I'm sure places like Auburn and Tuscaloosa have some pretty good Lynyrd Skynyrd cover bands or something.

As evidenced above, committing to UGA will satisfy your body, mind and soul.

But for the more egotistical fellows we meet along the recruiting trails who don't care about stuff like that and just want to be noticed, my final argument: schools like Alabama, Auburn and Florida have all won on the biggest stage in recent memory. These days, there's very little separating Georgia from them that isn't made of crystal. Come be a part of a team that makes history and brings UGA its first national championship in football in over 30 years. Trust me, you'll be big news for years to come. Herschel Walker just opened up a restaurant in town and motorists across the state still yield to him, and not just because they've seen his MMA videos.

I'm on record as being very happy with the 2013 Georgia recruiting class, but something needs to be done to keep so many talented prospects from crossing the border. I highly doubt any UGA coaches will read this, but if they do, coach, UGA should really sell itself. All you have to do is present it in the right light.