After a huge weekend, we have just a handful of results up with which to catch.

Following up on the win over Furman Sunday, the men's tennis team hit the courts Monday against ETSU. It had been a beautiful day on the courts Sunday, but the temperature dropped for Monday's match. Senior KU Singh remained out of the lineup, as did freshman Nick Wood, the latter of whom appears to be gone for the season with an injury. But junior Hernus Pieters was back from his injury. Georgia took a 1-0 lead after wins at 2 and 3 doubles. In singles, freshman Austin Smith made it 2-0 with a decisive win at No. 4: 6-3, 6-2. Pieters was not far behind on No. 3 where he won 6-2, 6-2, followed by freshman Ben Wagland winning in the second spot 7-6(1), 6-1, to clinch the win for the Dawgs. The three remaining singles matches took three sets: sophomore Nathan Pasha battled long but fell at No. 1, 6-7(7), 6-3, 1-0 (12-10); freshman Marco Nunez had a fight his first set but cruised through the second and third to give UGA its fifth point at court 5, 4-6, 6-0, 6-1; and sophomore Eric Diaz ceded the final point of the day, 3-6, 6-3, 7-5, to give us our final 5-2 score.

The No. 9 Dawgs will open conference play tomorrow at the Dan Magill Tennis Complex against No. 8 Tennessee. We lead the all-time series 47-23, but Georgia is only 2-2 against the Vols in the last two years: regular season losses in 2011, a win in the 2011 NCAA tournament, and last year's 7-0 shutout in Knoxville. I'd say we're due for another win. Saturday, conference play begins for women's tennis in Knoxville, where UGA should be heavily favored in the noon match against the Lady Vols.

Last night, our men's basketball team lost another close one that had been a Georgia game by 17 points early in the second half before Vandy came back to win by one in Nashville: 63-62. With the Dawgs leading by a point, a turnover gave the ‘Dores the ball who won the game with a last-second basket. UGA returns to Athens to play the other Tennessee team Saturday afternoon at 1:30 in hope of completing the season sweep of the Vols after the February 6 win in Knoxville. 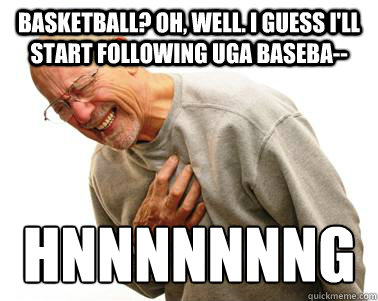 Tuesday afternoon, the baseball team was in Atlanta for yet another in-state showdown. Having dropped a series to Georgia Southern and lost to Kennesaw State, the Diamond Dogs continued to share the love within the Georgia borders and lost to Georgia State 10-7. We've got one more game against Kennesaw State and the annual three-game, home/away/neutral series against No. 20, 6-1 Tech. Fortunately, we can pretend we're better than Div III Oglethorpe without having to test ourselves against the Petrels on the field. Tomorrow we host UAB for the first of a three-game series.

The lady bulldogs, currently tied for second place in the SEC women's basketball standings, returns to Mississippi after having beaten the heck out of Ole Miss Sunday to play State tonight at 8:00 Athens Standard Time. The Other Bulldogs are 4-10 in conference play, so the good gals should win this one. Landers and the ladies will be back in Athens Sunday for the season's final game, 1:30 p.m. against Vandy.

The softball team will try to climb out of a shaky 7-6 start this weekend against North Dakota State, Radford, and Indiana State at the Bulldog Invitational. The gymnastics squad will hope to maintain some momentum from the big scores at Mizzou last week when they visit Baton Rouge tomorrow. As always, we'll have a wrap for you after the meet. Five members of the track and field teams are headed to Indiana for Notre Dame's Alex Wilson Invitational. The men's and women's swimming and diving teams are hosting the Last-Chance Meet at the Gabrielsen Natatorium, the final competition before the NCAAs get under way later this month. UGA hosts UT-Martin Saturday in equestrian. And finally, the soccer team will host Clemson Saturday night at 7:00 at the Turner Soccer Complex out South Milledge in the first of a handful of spring exhibition matches. We'll have all those results for you next time.

Thanks for checking in to keep up to speed in all corners of the Bulldog world.