Dawgs Win in Lackluster OT Game 64-52 over the Gamecocks

The offensive DERP is strong in this game. Turnover by Georgia, then turnover by SCAR. - vineyarddawg

Share All sharing options for: Dawgs Win in Lackluster OT Game 64-52 over the Gamecocks

Shooting 23% in the first half, in a first half that each team had more rebounds than points (Georgia had 29 rebounds and 23 points, and SCAR had 22 rebounds and 16 points). Georgia bumped it up to 38% in the second half, while SCAR shot for 58% and managed to fight their way back into the game taking it to overtime. Voted ugliest game ever on all counts, CBS stopped the coverage with one minute to go, and then the refs took about 10 minutes to decide if 4 seconds of regulation should be put back on the clock.

When ugly runs into ugly, you get double ugly.

Kentavious Caldwell-Pope had zero first half points, but got it back in gear for 14 second half points, keeping the Dawgs alive, and as usual, poor decision making, poor execution, ball handling and fouls allowed SCAR to creep back in the game to take it to overtime. With game tracker not updating for me at the moment, I can't quite give you the full stats, but it wasn't pretty. In fact, the live thread was more entertaining at times as davethedawg and I discussed snake hunting in the Everglades.

Now that Kyle is gone, he won't be around to post pictures of Kristin Davis, so I will now continue his tradition with a upgraded one with a picture of Jill Wagner, whom I watch every weekend on one of my favorite shows, Wipeout. Because that's what our basketball felt like today. 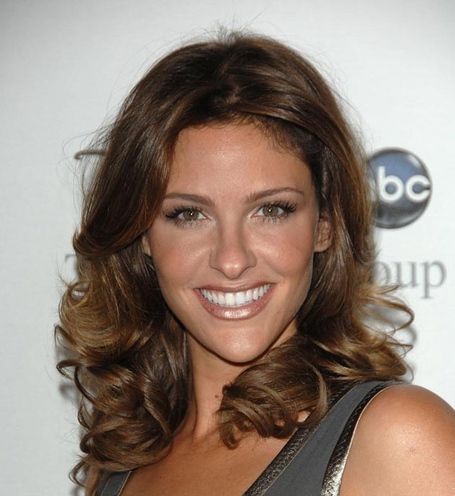