... in which we all together sing that old Jacksonville classic, "Gators, Gators, how'd ya like to bite my..."

Share All sharing options for: You're (Not) On Notice, Dawg! Week 11

(Ed. Note: As has frequently the case over the last 3 years in Jacksonville, a Saturday night of celebration followed by a long Sunday of driving back to Athens prevented me from posting this article at its normal time.  I apologize for the inconvenience.)

Good Monday morning, Dawg fans!  For the first time since the invention of the World Wide Web, we are starting a week in which the Georgia Bulldogs have a 3-game winning streak over the Florida Gators.  That fact, and that fact only, is the reason that this article is (for the third time this season) handing out pats on the back instead of chastisements.

Hey, it was ugly, but we still beat the best team in the SEC The Eastern Division The State of Florida The central part of Florida Alachua County, Florida. Twenty years from now, no one will care that we should have won the game 45-3 (or worse).  This will simply be yet another "W" in the win column for the good guys, and I'll take that all day long.

I've said it before, and I'll say it again... There ain't nothing like being a Georgia Bulldog in Jacksonville when you see this on the scoreboard: 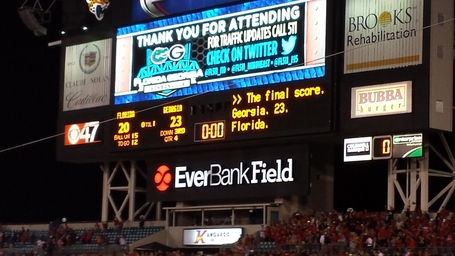 Our team might have stumbled and bumbled along the way, but at the end of the day, they made this thing happen. That fact alone is worth celebrating. (Also, we've got one of the worst App. State teams in recent memory on the docket for this week.) Therefore, for Week 11, I'm letting the following people know that You're (Not) On Notice, Dawg! 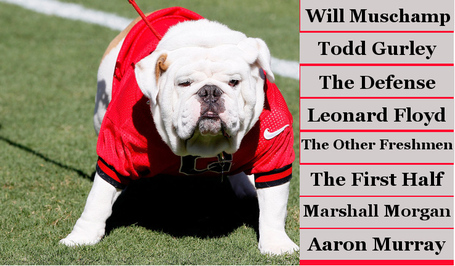 1) Will Muschamp - Ok, so you might be an arrogant, loudmouthed, turncoat son of a bitch, but on this day (and for only 24 hours), you're my favorite Georgia alumnus.  And hey, cheer up, coach.  In Jacksonville, sometimes you win and sometimes... oh, wait... nevermind.

2) Todd Gurley - I'm not going to mince words here: to the extent that any one player can be the lynchpin in a game, Todd Gurley was the reason we won this game. He was only at 100% for about 4 minutes in the first quarter, but those were the 4 minutes we needed, and he absolutely gutted out the lion's share of that last 8-minute drive on nothing but fumes. It was clear even to those of us sitting in the stands that Gurley wasn't "match fit" (to use a soccer term) yet, but that man has a heart the size of Secretariat. The phrase "give up" is not in his vocabulary.  If we somehow manage to get the better of Auburn in 2 weeks (which I'm not necessarily predicting, mind you), I feel confident that it will be largely due to the fact that when he's 100%, ain't nobody on the field that can stop him.

3) The Entire Defense - For as maligned as our defense, as a unit, has been this year, they came up huge in our biggest grudge match of the year.  Oh, sure, Florida's offense is hot garbage, but we've played other offenses that weren't world-beaters and failed to stop them when the game was on the line.   This squad was on the field for virtually the entire third quarter and still had the stamina to make a huge stop on literally the only drive the Gators had in the fourth quarter. There were mistakes, and they created their own adversity on that last Gator drive by gifting them a first down (after a timeout, no less)... but they followed that mental error with a huge set of stops and a  punt-forcing sack on Tyler Murphy, so I ain't gonna complain too much.

4) Leonard Floyd - Ok, so I've already given props to the entire defense, but I have to single out Leonard Floyd, as well.  He's a true freshman, and has already managed to become one of our game-changers on pass rushing and QB containment. He's made some "freshman mistakes," but his talent is undeniable.  I seriously think he's going to be a Jarvis Jones-level beast by the time he leaves Georgia (probably after his junior year).

5) Every Other Freshman on Defense - I felt the need to single out Leonard Floyd, but I also have to reward all of our freshman players on defense. As I'd hoped would be the case, this group has managed to grow up in a hurry (through necessity, due to the insane number of injuries to our offense), and we can now look at the rest of the season with some actual hope that we can make defensive stands when we need to. Shaq Wiggins, Quincy Mauger, and Tray Matthews have all become key contributors.  When you combine their performances with the rest of our underclassmen like Josh Harvey-Clemons, Ramik Wilson, Amarlo Herrera, and Ray Drew... we might have a chance to have a really special defense once again next year.  In fact, of our top 12 tacklers on defense, only one (Garrison Smith) is a senior.

7) Marshall Morgan - For as much as I've poor-mouthed Morgan in the past for his performance, I have take time to give him the accolades that's he's earned for this one.  Morgan has been automatic over the last few games, especially from distances that seemed simply out of his reach last year.  Morgan is 13 of 15 on the year and 22 of 22 on PAT's.   We've said it many times in the past at this site, and it still holds true:  Mark Richt's teams frequently play close games, and we always have at least 1 or 2 games every year that come down to making a field goal at the right time.  If my memory is correct, Morgan hasn't had any last-second field goals yet this year (though he did have one at the end of the first half against the Gators), but we needed every single kick he attempted on Saturday, and he came through magnificantly.

8) Aaron Murray - As I re-watched the game on DVR after getting home late Sunday night, I couldn't help but ponder Aaron Murray's situation in 2013.  He made the decision to come back to Athens after the 2012 season, saying he had unfinished business and wanted to compete for a national championship.  Then, virtually every playmaker around him went down with an injury. The goals he originally set for himself and his team lay in tatters. How easy it would have been to give up, get depressed about his rotten luck, and sleepwalk his way through the season, just trying not to get injured en route to a big NFL paycheck.  (It would have been a clown-like, let's say "clown-ey,"  attitude to have.)

Instead, he puts this team on his back and stands up like the leader he is.  He runs, passes, and does whatever he needs to do to get this team in a position to win games. He'll probably leave Athens without a championship ring, but for my money, he's the best quarterback we've had on the field during the Mark Richt era. David Greene might have been a better game manager (might), and Matthew Stafford might have had more archetypal NFL stats, but Aaron Murray has the most heart.

That's it for this week, Dawg fans. Just sit back and enjoy the fact that every Gator fan you know is wailing and gnashing their teeth this week.  I know I will.

I'll see y'all in Sanford Stadium on Saturday as our victorious Dawgs take the field against the Appalachian State Mountaineers, and I hope y'all will turn out and be just as loud as you were for the home games we had earlier in the season. This team certainly deserves it!