No, it's not "Clean, Old Fashioned Hate." The PR people can't tell us what to call it. (Ok, they can, but that don't make it true.)

In case you didn't notice, Kentucky is a bad football team in 2013. They've gotten their heads handed to them this season by everybody from Western Kentucky to Alabama. And yesterday, we scored 11 more points against them than any other team has scored all season. So why am I so depressed and ornery (more than usual, even) today?

It was confirmed this morning that Aaron Murray has a torn ACL and will be undergoing surgery to repair it on Tuesday. Murray's career as a Georgia Bulldog is officially over. And I'm not depressed because we don't have a suitable backup... on the contrary, Hutson Mason looks like he's more than capable of picking up Murray's mantle and carrying on for the rest of the season. No, I'm depressed because Aaron Murray is a Damn Good Dawg and a damn good person, and he doesn't deserve this. Not only does he not deserve a career-altering injury like this (at exactly the worst time... NFL draft time), but for this to come along during the snake-bitten season that has seen all of his other offensive weapons go down around him... it quite literally adds insult to injury. "Cursed' barely begins to describe the wave after wave of unfortunate maladies that have befallen this team. Seth Emerson, take it away:

Every Georgia [offensive] skill-position starter, and three of their top backups, from the season opener has missed at least one game with an injury,

There's just nothing more you can add... so I won't.

Instead, I'm going to do what the remnant of our team must now do... turn the page and look ahead to this week's game against the Georgia Tech Yellow Jackets. The Engineers have compiled their customary 7-win season to this point and stand at second place in the ACC (Atlantic or Costal, take your pick) Division standings. They're currently behind a small, private, basketball school whose team is coached by the dude I saw in that "The Book of Manning" ESPN special, but if UNC upsets Duke, Virginia upsets Virginia Tech, and Pitt upsets Miami on Saturday, the Golden Tornado could actually find themselves in the ACC Championship Game once again.

And as much as we joke about the Georgia Tech offense, Paul Johnson's bunch can (and will) jump up and bite you if you're not properly prepared for them and focused on them. Therefore, I'm letting the following people know that, for Clean Dirty, Old Fashioned Hate Week, You're On Notice, Dawg! 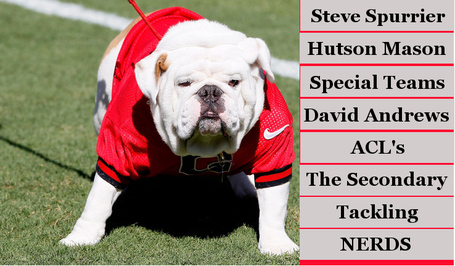 2) Hutson Mason - Hutson Mason has played in exactly one drive in the first half of a game in his entire college football career. He has taken zero snaps in situations where Georgia was ahead by less than 3 scores. I have been pretty impressed with what Mason has shown us on the field thus far, but let's just take off the rose-colored glasses from the outset: he has played no snaps under serious game pressure. This Saturday will be his first collegiate start. Thankfully, he'll have Todd Gurley at his disposal, and will be able to target guys like Chris Conley, Michael Bennett, Arthur Lynch, Rantavious Wooten, and Rhett McGowan. He still has to be considered an unknown factor at this point, though. To have a chance to beat Tech, we need Mason to be as good as we all think he is.

3) Special Teams - Our foible-prone special teams units once again produced a "Yakety Sax-quality" performance on a play early in the game that could have been crucial at that point. Fortunately, the defense stood tall and held the Wildcats to a field goal after Reggie Davis' muffed punt gave them the ball on the wrong 26 yard line.

I would like to imagine that we will blow out the bugs like we did Kentucky. In reality, however, we're much more likely to be in a close street fight, much like most of our other games have been. Terrible special teams gaffes like this one have already been major turning points in games earlier this season. We need to avoid giving the Jackets any easy points like that this week.

4) David Andrews - It never really became an issue in the second half against Kentucky, but after Mason came into the game, our Center looked like he promptly forgot how to consistently snap the ball. Mason was the recipient of many high snaps when he was back in the shotgun during the second half. He handled most of them well, but one snap actually flew right over his head, resulting in a huge loss of yardage. I don't know what makes Murray so much different from Mason when all you have to do is deliver the ball to him, but I hope whatever it is, David Andrews can figure out the adjustments he needs to make in the next 5 days. We don't need another new problem to pop up for this team.

5) ACL's - This point should speak for itself. I don't know who's been coaching up our ACL's this year, but they suck. I'll just blame Mike Bobo. FIRE BOBO'S ACL.

6) The Secondary - This is the one component of our team that really does worry me as it relates to the Tech game. I don't know if it was an actual blown coverage by Shaq Wiggins or someone else's blown coverage that he was trying to clean up, but we once again saw an uncovered receiver streaming down the field for a long receiving touchdown against our defense on Saturday. Contrary to popular belief, Georgia Tech actually does pass the ball from time to time, their option scheme forces us to play man coverage more often than not. This means that if you consistently let your receiver run past you, we might see the scoreboard light up far more often than we want to for the bad guys. Our secondary needs to tighten up and shut down every Tech receiver. Don't let them lull us into a false sense of security and then chuck the ball downfield for a quick score. That's the worst possible scenario for what we could allow to happen, in fact.

7) Open-Field Tackling - Similar to my reasons for posting the previous point, Georgia Tech's offensive scheme requires us as a defense to generally assign a defender to every offensive player as we account for who might get the ball. This means that, at least initially, we're going to have to make a lot of solo stops and tackles. Our open-field tackling hasn't quite been top-shelf this year, and that's just not going to be good enough against the Golden Tornado. We need to wrap up every single time, and make sure our assignment football is crisp and clean. This offense may be a "high school offense," but the Techies don't perennially win 7 games by accident. It's a touch scheme to defend, and our now-veterans on the defensive side of the ball have to be on their guard for every single play this Saturday.

8) The Georgia Tech Yellow Jackets - Look, we don't have any major accomplishments left for which to play. This team will be winning no conference championship and no national championship. We've only got two games left, and the first of them is against our second-oldest rival. (Well, the second-oldest rival we still play, that is.) Our little brothers are already insufferable when they lose, but they're even more insufferable when they win. This Bulldog team has already remained united through all the inuries and adversity they've face this year, and they're going to come into Historic Grant Field at Bobby Dodd Stadium even more motivated to win a final game for their seniors, their fans, and their fallen quarterback. Bugs, you'd better be ready to play. You've got a target on your chest, and we've got a flyswatter primed and ready to strike.

That's all I've got for the moment, and I admit that I'm spent. So much that's out of our control has gone against us this season... and yet our young men in the Red and Black keep coming back, fighting through the adversity, and constantly laying it all on the line for us. I can't remember a team or a collective group that I've more admired. This group of Dawgs is 100% "Damn Good," and I can't wait to cheer them on one last time in the regular season on Saturday.

I know I'm asking a lot, you guys, but hunker it down one more time!