Aaron Murray left Saturday night's game between the Georgia Bulldogs and the Kentucky Wildcats with a knee injury in the 1st Half.  Georgia Tech message board patrons quickly began commenting on the situation... which wasn't particularly surprising because once they finished asking Mom to wash their underwear and make them some Bagel Bites, what else were they going to do on a Saturday night.

A few minutes ago I decided to cruise by a Tech site to read said commentary. Why would I subject myself to this you ask? I already knew what it would look like.  Call it a masochistic curiosity.  These are the same people who laugh about dogs dying, but I wasn't sure anyone with a soul could cheer the end to a football player's career. But Techies never disappoint.  You can count on them for two things: Losing to Georgia and acting like total asshats on the internet. To wit:

He'll probably be back. Crybaby got a booboo 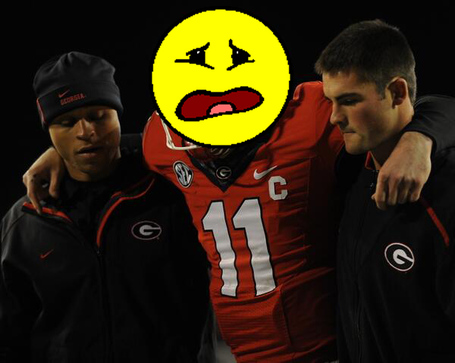 öööö UGA in every way. I feel no sympathy for this douchebag. Should've gone pro last year but the retarded glory wh*** wanted records and a MNC. So, Aaron, how is that working out for you? Good luck limping the 40 at the combine while trying to explain that you aren't too short. Perhaps he should just give up football and apply for a job as Pollack and Palmers fluffer. Of course, he should ask his black boyfriend permission first.

The only tragedy here is that his ACL didn't slingshot out of his knee, shoot across the field and hit Uga in it's inbred head therefor mercy killing that sad sack of öööö.

... and if an injury is going to happen, it couldn't have happened to a bigger douche.

(Ed. Note: I'm sure Georgia Tech is proud to have awarded you a doctorate)

I hate Aaron Murray. Nothing makes me happier than seeing Murray hurt himself in his final game at Sanford Stadium. I wish Georgia unsafe travels and terrible luck this week. Maybe we will knock Hutson Mason out. Would be hilarious to see a young gun QB tear his ACL or something worse in his first game as starter.

UGA players and coaches aren't people. They're inbred öööö wads so who cares? öööö em all. Cheer for 85 injuries next Saturday

And credit where credit is due to the guys who are actually decent human beings:

You guys are buttholes, cheering for an injury.

Some of you guys make me want to puke. I'm a new poster here, but to celebrate a kid tearing an acl is classless. It's not what tech fans are about. You are no better than a Uga fan. Go ahead and bash me, but that's awful.

You are gentlemen, scholars, and a credit to your university (although that last part was unnecessary, JacketHawk. We'll chalk it up to good natured ribbing though). Please disregard the remainder of this article.

No one should get so butthurt over college football that they get excited when another human being tears up his leg.  Is college football your reason for living? If so, you might want to consider cheering for another team before you fling yourself into oncoming traffic off the North Avenue Bridge.  Your team isn't relevant and hasn't been for over 20 years.  You aren't even part of the conversation.  No one ever says "Georgia Tech is gonna be pretty good this year." No one talks about you as a contender during media days.  No one worries about you showing up on their schedule.  No one gives your program a second thought once they've figured out how to scheme for your high school offense... which has typically taken all of one season.  ESPN doesn't talk about you aside from the occasional Thursday night game (which you lose) or when they are contractually obligated to do so after you fluke your way into a conference championship game that no one watches (which you also lose and/or vacate).  I get that Georgia hasn't won National Championships either... but at least people occasionally think we might.

Also, other than beating your sorry tails for his entire career, what has Aaron Murray ever done to any of you scumbags?  Did he nail your sister? Cause that's what it sounds like.  You know what? I hate Tim Tebow.  Stone cold hate his freaking guts.  Mostly because he beat us (not as often as Murray beat you, but still).  Never in my life did I wish Tim Tebow got hurt.  I wanted him to lose, sure.  I even wanted him to fail in the NFL.  But if he had torn his ACL, I would've felt sorry for him. And I certainly wouldn't have gone all "internet tough guy" and talked trash about it.  I can almost understand a feeling of relief (since Murray's injury is the only chance you have to beat Georgia... and you still won't), but when you get all hot and bothered because a college kid hurt his knee, you just come off as desperate and pathetic... which is fitting, I suppose.

I would tell you to imagine Aaron Murray was your son... but I know that'll be difficult for many of you since you can't find anyone willing to procreate with you. You should be ashamed of yourselves.  If your parents raised you properly, they would be ashamed of you. And if people who actually work and study at the Georgia Institute of Technology read your drivel, I'm quite certain they'll be ashamed of you and that they are in any way associated with the low-grade brand of human beings who claim to represent their fine institution.