To Aaron Murray, a DGD:

In case you don't recognize it, this is a picture I took on September 4, 2010. This is your first collegiate snap. The Dawgs were facing Louisiana-Lafayette on a beautiful Saturday afternoon in Sanford Stadium. I took this picture because I just had a feeling you would be a special quarterback at Georgia. I'm not often right about football, but I was right about that. 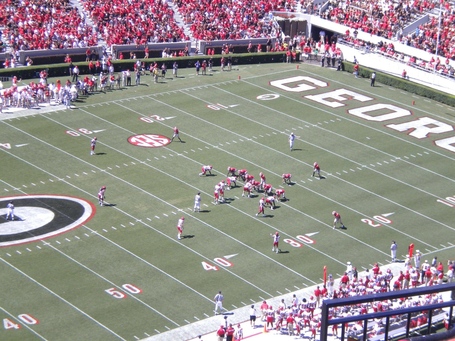 Since that 55-7 drubbing of the Ragin' Cajuns, you've proven time and time again that you love Georgia and are wholeheartedly committed to everything this great university stands for. Any real fan of this team appreciates your heart, your dedication, your passion and your unbelievable talent and will consider you the finest Georgia quarterback in years.

You've faced your share of trials and tribulations since taking over as the Bulldogs' starting quarterback.

You've been assaulted by thugs: 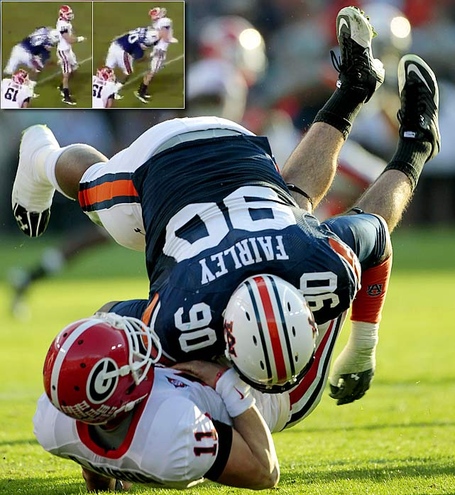 You've been brutalized by goons (who even got away with it): 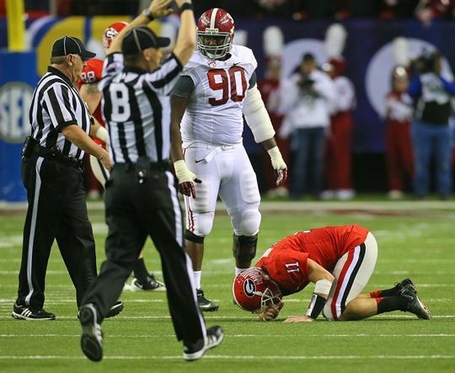 You've even been betrayed by some who claimed to support you: 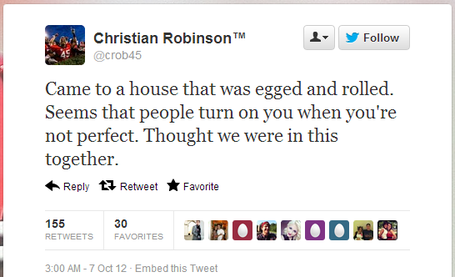 But through the ubiquitous negativity and skepticism directed at the Georgia football program from those both inside and out of the Bulldog Nation, amidst all the media drivel of you not being able to win "big games," you've persevered and gone on to do some amazing things as Georgia's starting quarterback, Just look what you've accomplished in your tenure under center for the Dawgs.

You restored order in Jacksonville: 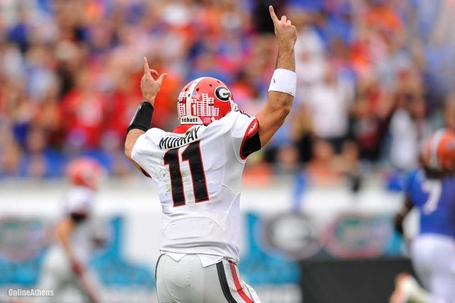 You never lost to Tennessee: 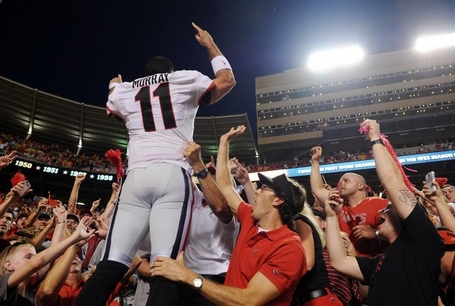 You went 2-2 against Auburn, but the two victories you led Georgia to will forever be remembered as some of the best beatdowns in the history of this friendly bitter rivalry (and one of those losses was a total fluke): 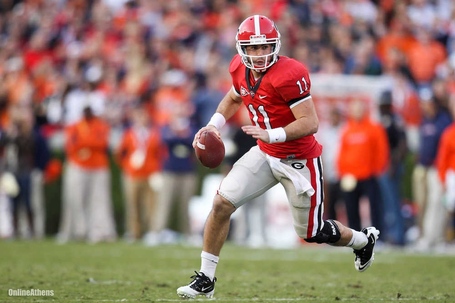 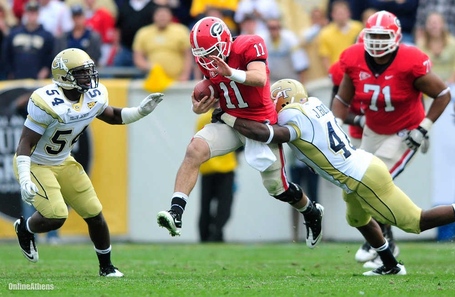 And despite what some idiots might say, you are one of the most beloved players in recent UGA football history: 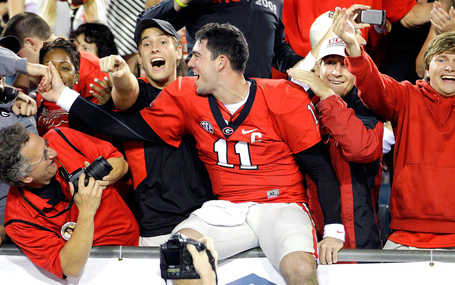 But you are more than a football player. You are a fantastic ambassador for our university and its athletic program: 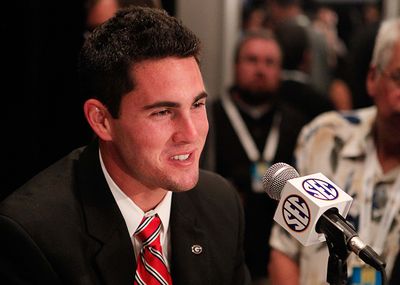 You will leave Georgia as the SEC's statistical leader in more than a handful of categories and you're right on the cusp of breaking a few more records before you leave campus. No doubt this is an impressive feat: one of your predecessors at Georgia, Matthew Stafford, is now the all-time leader in passing yards for the Detroit Lions. We Georgia fans could not be more proud of you.

But if I have learned anything about you while cheering you on through thick and thin since that early September day in 2010, these individual accolades probably don't mean too much to you. You came back to Georgia in 2013 to win a ring and we absolutely hate it that you won't get that. No one deserves it more than you, Aaron. So is life, though. The ball doesn't always bounce your way. It's how you respond to the bouncing that will forever mark your legacy. I think it's safe to say you've responded pretty well. Despite your millions of success on the field and overwhelmingly busy life as a student-athlete off of it, you've never forgotten the fans who love and support you. 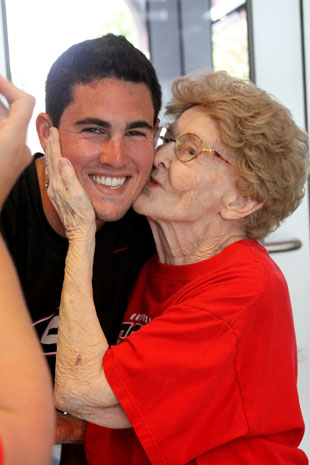 Murray spending time with a 96-year old fan via l.yimg.com 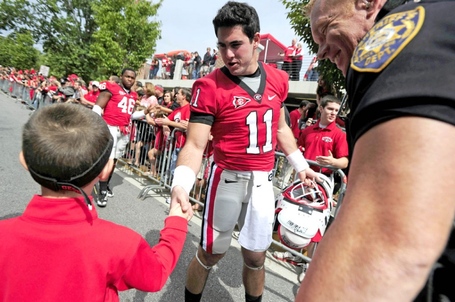 Inspiring future Bulldog fans before a game via dogbytesonline.com 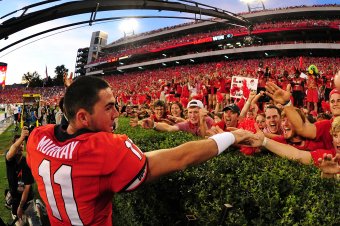 Always letting the fans know he appreciates them via img.bleacherreport.net

The DGD title gets thrown around a bit, but you are the epitome of what those three letters mean to me: a leader in the locker room, a winner on the field, an outstanding student in the classroom and a great citizen of Athens. Aaron, as we Dawg Sports bloggers were trying to make sense of what had just happened at the end of this year's Auburn game, some of us crying, some of us cursing the football gods, others just sitting in miserable silence, you tweeted this:

Would do anything to go back and start playing as a freshmen again. These 4 years have gone by way too fast. I am a Dawg for life!

I wish I had your triumphant spirit... You're darn right you're a Dawg for life! Not only because, as the ditty goes, "Once a Dawg, always a Dawg, how sweet it is," but because you have earned the right to have your name forever enshrined among the greatest players to ever don the Red and Black. You embody what it means to be a Georgia Bulldog under Coach Mark Richt. You've taken your licks, but have responded in turn, doing so with dignity and pride. We love you (and Coach Richt) for that. Our beloved football program might not have won a national championship since 1980, but as Coach Richt said following this season's victory over LSU, "No one does it better than Georgia." And no one has done it better than you since 2010, Aaron.

So as you prepare for your final start Between the Hedges on Saturday, know that we truly appreciate you and all you have done for the football program at the University of Georgia. I was there for your first start at Sanford Stadium but I, unfortunately, will not be there for your last. I only hope that those in attendance will give you the ovation you deserve when Brook Whitmire introduces you over the loudspeaker during Senior Day festivities. I want to see and hear the Bulldog faithful on their feet for you and your classmates until they are asked to sit down. I will even be standing and applauding from my house in faraway northern Virginia. My wife will think I'm crazy for that, but I don't care.

Aaron, the road we've been on together since 2010 has not always been the smoothest; as a matter of fact, it's been downright bumpy sometimes, but no matter how rough the ride was, I have always been glad it was you behind the wheel. I don't know what the NFL holds for you, but my hope is that you will one day be seen patrolling the sidelines of Sanford Stadium with a clipboard in your hand. You've been an inspiration to watch, a pleasure to cheer for and I wish you nothing but the best as you conclude what has been a truly remarkable career as Georgia's starting quarterback.

Now go out there and shred Kentucky's defense like only you can do. 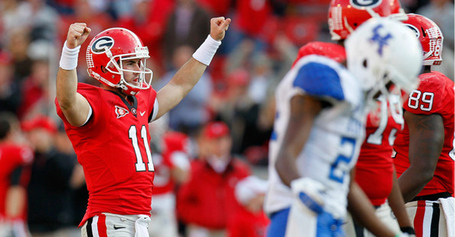