Or, "How I Learned to Stop Worrying and Love the Bomb."

Yesterday's Auburn game was the latest chapter in the "Holy crap, did that just happen?" season for the Georgia Bulldogs. Fully eight of our ten games this season have come down to the last drive, with nerve-rattling, barn-burning endings being the "new normal" for us this year. We really should start airing a health advisory before our games on TV. Something like, "Georgia Bulldogs football is not recommended for those with a heart condition. Please consult your doctor to see if continuing to watch Georgia Bulldogs football is safe for your health. (Hint: It's not.)"

Up until about the 12:00 mark of the fourth quarter, I already had a scathing "on notice" article written in my mind. I had at least 6 of the 8 spots already handed out, and I was setting my dials to #FIREERRBODY and #BENCHERRBODY. But here's the amazing thing: after (once again) failing to show up for virtually an entire half, both the offense and the defense came alive. The defense began to actually stop Auburn from running the ball, and the offense began to march up and down the field as though they were Oregon. (Ok, well maybe more like they were Clemson or something.) Instead of giving up (as I admit I had already done), they showed tremendous fight and grit, and fought their way all the way back from a 37-17 deficit to take the lead with less than 2 minutes remaining in the contest.

The flukiest of all fluke plays finally did us in, but after that display of intestinal fortitude, I simply can't find it within myself to put any Georgia player on notice this week. I feel worst about this game for Aaron Murray, who is one of the greatest Georgia QB's of all time and a Damn Good Dawg. He came back for his senior season expecting to compete for a national championship, only to see the skill positions crumble around him due to injury. I can be mad at our defense for their first half performance, but I can't stay mad at them because of the way they fought in the fourth quarter. It takes heart and spirit for a bunch of inexperienced underclassmen to fight and claw the way they did in that final period on defense. If not for the stupidest of all stupid bounces in Georgia history, they'd have done enough to win, too.

Still, though, it ain't called "feelingsball," and we're sitting here at 6-4 with the Kentucky Wildcats coming into Athens for Senior Day this Saturday. The show must go on, and that goes for this feature, as well. Therefore, for Week 13, I'm letting the following people know that You're On Notice, Dawg! 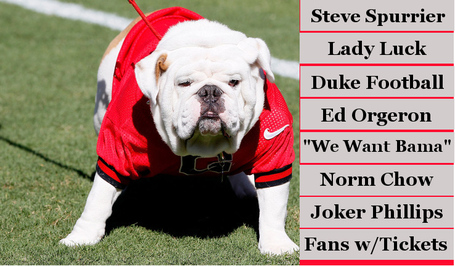 1) Steve Spurrier - Why Steve Spurrier? Because he hates us, we hate him, and because I have it from a very authoritative source inside the South Carolina administration that he actually intentionally hamstrung the Gamecock offense last night just so he could say that he was able to beat Florida while scoring fewer points than Georgia did. That guy just can't resist an opportunity to tweak the school that singlehandedly prevented him from winning a national (and SEC) championship during his playing days and which has returned to its historical winning ways in their rivalry with his alma mater.

This season started out with such great promise. And then ol' Lady Luck, as the venerable Larry Munson used to call her, frowned on us. Check that... she didn't frown on us, she spat upon us in the Tennessee game, then [REDACTED] upon us in the Vanderbilt game. She was none too pleased with us in Jacksonville, either, though we managed to eek out a win. Last night, however? Ol' Lady Luck officially doesn't live in Athens anymore. After a nebulous Aaron Murray touchdown that was about as close to "maybe he scored and maybe he didn't but we'll never know for sure" as one will ever see, we suffered the most flukey bounce off a hail mary pass since the "Bluegrass Miracle" 11 years ago in Lexington (against... Kentucky! Our next opponent!).

This is a gif of the Bluegrass Miracle. I don't have the heart to embed the other gif. It's just too soon.

It's not that Lady Luck isn't smiling on us anymore. Lady Luck hates us. I think Lady Luck has been dating Penn Wagers or something, too, because he managed to come through last night without getting blamed for anything that actually cost us the game.

3) Duke Blue Devils Football - This seemed appropriate to me to place directly after the entry devoted to "Lady Luck." I have been a closet Duke fan for most of my life, though for understandable reasons, it is usually a basketball association. (Also, it doesn't help that Duke's most successful football seasons during my lifetime were directed by Steve Spurrier.) David Cutcliffe has done what few people thought anyone could do, however, in bringing Duke football back to respectability. But that's really the problem. Duke shouldn't ever be good at football. It's like Northwestern, Wake Forest, or Vanderbilt being good at football... it just doesn't make any sense. Small private schools are supposed to serve as cannon fodder in football, not as legitimate conference contenders. They're there to boost the conference's basketball league. (Ok, well, not in Northwestern's case.)

I like you Duke, and I will continue to replay the Christian Laettner shot (followed by Thomas Hill crying) from the 1992 NCAA Regional Final against Kentucky (See how this ties into this week's game, too? Synergy!) over and over every basketball season. But please, respect the natural order of college football here.

4) Ed Orgeron - One of the most famous unintelligible human beings of the modern era, "Coach O" had quietly managed to pick up the pieces of Southern Cal's season before yesterday... then he broke the doors wide open by defeating the Stanford Cardinal, they of the "Being the only team Oregon can't beat" fame. USC has looked like a completely different team since Lane Kiffin was fired early in the season after a humiliating loss to Arizona State. I find it mystifying how Orgeron has been able to get this pack of Trojans to perform so cohesively, especially considering that he couldn't even mount a winning record against Kentucky (again, a tie-in to this weeks' game! Synergy!!) when he was the head man at Ole Miss.

I know you're having fun now, Coach O, but be careful. Keep winning and they might just remove that "interim" title from your job description, and then everyone will hate you again, as is befitting a Southern Cal coach.

5) The "We Want Bama" meme - Suddenly, every football fan whose team wins a big game seems to like to chant "We Want Bama" as some kind of victorious, braggadocious mantra. Even Duke fans (seriously) were chanting "We Want Bama" after their defeat of Miami to take the drivers seat in the ACC division of which they're a member. (Your guess is as good as mine as to whether that's the Atlantic or the Coastal.) That's about as silly as Georgia basketball fans chanting "We want Kentucky!" after a win. Do you? Do you really want to play them? (See? It all comes back to the Wildcats this week!)

Ask yourself this question, fans of teams who are chanting this phrase: Have you ever danced with the devil in the pale moonlight? Nick Saban always asks that of all his prey. He just likes the sound of it. (Followed immediately by the sound of a steamroller crushing everything you and your football team have ever held dear.)

6) Norm Chow - Coach Chow has spent the better part of a 30-year coaching career making people question why such a successful assistant coach never had the head-coaching chair pulled out for him. He started out as Lavell Edwards' play-caller at BYU (including the 1984 national championship season for the Cougars), then moved on to coach Philip Rivers at NC state before becoming the offensive coordinator for Southern Cal during their semi-dynastic run in the early 2000's. His track record suffered a bit during a stint at UCLA in recent years, but he's still coached some of the best college quarterbacks of all time, including Jim McMahon, Steve Young, Ty Detmer, Philip Rivers, Carson Palmer, and Matt Leinart.

One could argue that Coach Chow was merely waiting for an opportunity that he felt was "right for him." He did, after all, turn down the head coaching position at the University of Kentucky in 2002 (SYNERGY!!!) There were also some whispers that perhaps he was simply very bad at interviews or something. Once he finally got his first head coaching job at Hawai'i in 2011, though, we saw why, possibly, no programs of note had ever pulled the trigger on him. The Rainbow Warriors, under his tutelage, are 3-19 over the last 2 years, and he recently gave the following quote to a local CBS Sports affiliate:

I'm not sure if I'm cut out for this head coaching thing... I'm too old for this.

Erm... well. Ok, then. After the fact, he claimed that those comments were made in a "tongue-in-cheek" manner... but hey, if you're going to fail spectacularly, at least you should choose to do so in a place like Hawai'i, right? (Better than Kentucky, anyway.)

7) Joker Phillips - Let me first say that I've got absolutely no problems with the job that the Joker is currently doing coaching up the wide receivers in Gainesville, Florida. I fully support the results he's gotten from his players thus far. The former Kentucky head coach (SYN. ER. GY!!), though, has made a habit of not only creating very odd posters encouraging recruits to become a Gator, but of proudly publishing such material on Twitter.

Flashy photoshop jobs and creative wooing can be a great conversation-stater, Mr. Coach Joker, but one needs to step away from the photoediting software and actually, you know, put a competitive product on the field to achieve actual success in the SEC. In your case, though, I'd keep on cranking out the creepy recruiting fodder. For the kids, you know. Actual results are so overrated.

8) Georgia Bulldogs Fans With Tickets (all fans, not just students) - Ok, let's end up on some serious business. I understand that the temptation will be not to show up on Saturday. Our season is in the crapper from a record standpoint, and we've got, essentially, nothing more for which to play other than pride. (And we're playing Kentucky, who we should roll about as easily as we did North Texas.) Why should you care? Well, Saturday is Senior Day, and is the last time Aaron Murray, Artie Lynch, Rantavious Wooten, Rhett McGowan, Blake Sailors, and all of our other seniors will be taking the field for the Red and Black.

Even if you're not excited about the opponent or about the season, you need to be excited about this team and these seniors. They have given everything they had and literally expended blood, sweat, and tears on our behalf this past Saturday on the Plains. They have (proverbially) left everything out on the field and have earned our unwavering support, even in a snake-bitten season like this one has been. If you have tickets to the Kentucky game this Saturday, show up early, be loud, and cheer the Dawgs on to victory for one last time between the hedges in 2013!