You're On Notice, Dawg! Week 7

Pyrrhic Victory: A victory with such a devastating cost that it is tantamount to defeat. Someone who wins a Pyrrhic victory has been victorious in some way; however, the heavy toll negates any sense of achievement. (Courtesy of Wikipedia)

Share All sharing options for: You're On Notice, Dawg! Week 7

Ed. Note: There is strong language near the end of this article that makes it not-family-friendly. You have been warned.

I've got nothing to add to what's already been said about Saturday's game. We have to find some way to move forward to the Missouri Tigers, so I'm letting the following people know that, for Week 7, You're On Notice, Dawg! 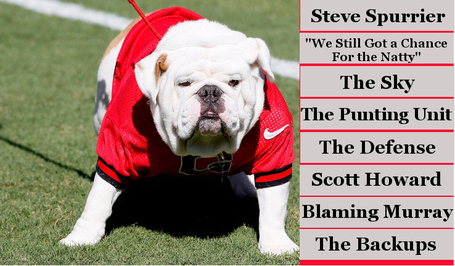 1) Steve Spurrier - Why Steve Spurrier? Well, hell, everything else seems to be falling apart, but at least we still hate Steve Spurrier. And You know what? He returns that feeling wholeheartedly. So at least there's something in our world that hasn't radically changed.

2) People who are encouraged by our win because it means "we've still got a chance at winning a national championship" - Well, I suppose in the most technical sense, these people are correct. But, dude. We have to worry about whether or not we can beat Missouri. The Tigers are 5-0 (the fourth undefeated team we'll have played this year) and have beaten every team they've played (including Vanderbilt) by double-digits. And they have a very good mobile QB (James Franklin), which has been a bane even to the great defenses at Georgia under Mark Richt. And we probably won't have our 2 best running backs or 3 of our 4 best receivers. So we're critically hobbled on offense and have yet to prove we can stop anybody on defense.

You'll forgive me if I'm not exactly entertaining thoughts of a national championship at this point.

4) The Punting Unit- We've played 5 games this year and had 2 blocked punts and another punt that was within a hair's breadth of being blocked (against N. Texas). And because of that incredibly poor coverage, our punter was put into a position where he sustained a concussion. So, now we're down to walk-on Adam Erickson as our punter for an unknown number of games. And having a good punter is critical to our success, since our defense has about a 50/50 shot of stopping opposing offenses even when we give them a long field upon which to operate.

I might be single-handedly delivering my neighborhood CVS its best fiscal quarter ever with my increasing consumption of Mylanta during football season. #PagingDarrenRovell

5) The Defense (collectively) - Our D effectively shut down the Vols in the first half, but reverted back to their sieve-like ways in the second half, and it nearly cost us a victory. And let me be clear about my opinion on this... our defense didn't win the game for us. Tennessee lost it with a dumb mistake, and our field goal kicker was able to make a kick he should be making 90% of the time to ice it. (Following, by the way, several mystifying play-calls that actually lost yardage and made the field goal more difficult.)

Our offense is now pockmarked with so many holes due to injury that we need the defense to improve. We might have an All-American quarterback, he can't do everything by himself. From here on out, especially against a(nother) high-scoring team like Mizzou, we have to have the defense act as more than a slight annoyance to our opponents' efforts to score. I have said many times over the previous 6 weeks that there will be at least one game this year where we need our freshman-laced defense to stand up big in big situations and save the game for us. Well, the Tennessee game was the first of those games, and we, essentially, got lucky. With the attrition we're now getting on offense, I'm betting that we'll see more of those games in the future.

This is the defense's time to shine. They need to step up and make it happen.

6) Scott Howard - For those of you who don't know this guy's name, Scott Howard is Georgia's play-by-play man on the Georgia Bulldog Radio Network. For years he was Larry Munson's color man, and he took a step to the right in the booth when Munson retired, sliding into the primary role. Yesterday's game was the first game I've had to listen to almost exclusively on radio since Munson retired, and I have to say that I was underwhelmed. Maybe I'm just depressed and in a bitchy mood (Hint: I am), but I was very disappointed in the product I got from Howard during Saturday's radio broadcast. He sounded, quite frankly, like a guy who has done color commentary all his life trying to do play-by-play (which, obviously, is the case).

When Munson was calling the game, you had a picture painted in your mind of what was happening. If you went back and watched the game on your DVR (or, more likely when Larry was calling, videotape), you'd more or less see exactly what had played out in your mind as Munson had described the play to you.

Scott Howard, however, falls into the same trap that far too many radio broadcasters do in today's world: he either 1) describes the game the same way a TV announcer would ("Holy Smokes, did you just see that?" No, Scott, we didn't.), or 2) doesn't accurately describe the play that just happened well enough for you to picture it in your mind. As I was watching the game on my DVR after the fact, one play in particular stuck out to me: a UT end around that turned into a big 16-yard gain for them on their first scoring drive. We completely blew contain on the play and allowed the Volunteer WR to scamper down the field for a huge gain. When I heard Howard calling the play, though, he described it as though it were a 3-4 yard gain that was reeled in by the defenders. Then the following play was a first down and I was thinking to myself, "Wait, did that get a first down?" (To Howard's credit, however, at least he didn't call it a "reverse" like half the announcers on TV probably would have done.) Another good example is on touchdown plays... all I hear is "ZOMG AMAZING ONE-HANDED CATCH BY CHRIS CONLEY!1ONE!!ELEVENTY!!!." Where was the pass? Was it a fade route to the corner? Was it a crossing route? Was the ball tipped or otherwise interefered with? Was Murray pressured or hurried? I don't really know what happened... all I know is that Chris Conley one-handed a touchdown pass that I will later need to check out on YouTube. And that's good to know... but it does nothing to help you picture what's actually happening in your mind, and that's what great radio announcers give you.

Trying to follow the game as Howard was calling it was a chore, whereas listening to Munson call a game was damn near a literary experience. His commentary flows much more easily if you're actually watching the game in the stadium or on TV and listening along to the radio simulcast, not using it as your sole means of getting the play-by-play action. Am I unfairly banging on Scott Howard simply for not being Larry Munson? Yeah... I guess maybe I am. But, for the record, I just can't help but wonder how a guy like Jeff Dantzler would be able to weave the verbal tapestry in a game like that. His UGA baseball and women's basketball broadcasts are excellent, and for my money, he's as close a thing to Munson as you're going to get nowadays.

7) Blaming Aaron Murray for Keith Marshall's Injury - I've seen more than one person say something to the effect of blaming Aaron Murray's throw to Keith Marshall in the first quarter for Marshall's injury. I can't believe someone could be so ignorant as to think it's somehow the quarterback's fault that a running back got injured while running the ball. The throw to Marshall was not dangerous, and it didn't inherently put Marshall in a vulnerable position (as opposed to, say, throwing it across the middle to a receiver that's about to get blown up, which Murray didn't do). Sure, Murray probably should have chosen to throw the ball down the field when the defender broke towards Marshall, but that pass didn't get him hurt. It was a freak, unfortunate accident that could not have been forseen.

And speaking of Marshall's injury... is it really necessary, CBS cameraman, to show a super-closeup of Keith Marshall crying on the sidelines about 15 times? I was crying myself by the damn time he got carted off into the locker room.

8) All of the backup RB's and WR's - As of the time of the writing of this piece, we don't have the full injury reports on all of our men that went down. But it sure does look like we'll be without Gurley (for this game) and Marshall (for the rest of the year) in the backfield. It also looks like we'll be without Justin Scott-Wesley and Michael Bennett, possibly for the rest of the year, and Malcolm Mitchell is already out for the year. We gloated at our plethora of options on offense all offseason, and now we're going to see how deep our offensive talent really is. We've still got Chris Conley, Artie Lynch, and Rantaveous Wooten... but that's about it as far as names the average fan would recognize. (Rhett McGowan might count, too.) The "next man up" mentality will be certainly tested and tested hard from here on out.

Bonus) Cancer - This one's on behalf of DavetheDawg and his family. You guys might have noticed that DTD's "15 thoughts" has been absent for the past two weeks. Dave's mother is currently fighting a valiant battle against cancer, and he's been faithfully by her side during her fight, which has required him to be away from us for a time. Our prayers are with Dave, his mother, and their entire family, and we're all rooting for her to beat this menace. Fuck cancer.

To wrap it up, this week's game will truly set the tone for the rest of our season. We've suffered some horrible, unfortunate injuries, and it would be perfectly understandable to come out looking inexperienced on both offense and defense at the most important skill positions while getting upset by the Tigers from the good Columbia. (After all, that would be a fair assessment of our players. In addition to all of the freshmen starting on defense, we'll now have two freshman starting/playing at RB (J.J. Green and Brendan Douglas) and contributing heavily at WR (Reggie Davis)). Nobody would be happy about it, but it would be understandable.

If we can somehow come together and muscle our way through these next two games against Missouri and Vanderbilt, however, gathering valuable experience for our young pups along the way, we'll have a bye week before the annual showdown in Jacksonville. And that Cocktail Party, featuring the SEC's best defense against what might still be the SEC's best offense, could be legendary. Assuming the Gators hold serve (or only lose to LSU), it could also be the elimination match for the SEC Championship Game. But that's a big "if," and is built upon the backs of players that have still only been tested for a quarter of a full college football schedule.

We gotta somehow find a way to beat Missouri, y'all. The Bulldog Nation needs to show up early for the noon kickoff and be as loud as you were for the LSU and South Carolina games. Our home field advantage in those wins cannot be marginalized, and will be equally as important this week. This is the plan. There is no alternate plan.