You're On Notice, Dawg! Week ∞

No, Bulldog Nation, our long national nightmare is not yet over. Heck, it has barely begun.

Share All sharing options for: You're On Notice, Dawg! Week ∞

For as long as I live, I will never - ever - stop believing that Georgia started out the 2013 season as an elite team. Our defense was always little more than, "Welcome to campus, kid... now tackle this dude that is running just ran past you," but our offense was the kind of juggernaut you read about in the history books. Todd Gurley. Keith Marshall. Malcolm Mitchell. Justin Scott-Wesley. Michael Bennett. Chris Conley. And now we have none of them. We've still got Aaron Murray, but what good is having a virtual JUGS machine behind the center if there's no one on the other end to receive handoffs, run routes, and catch passes?

And let's be fair to the defense: our young guys have been making progress over the course of the season. We resembled a poorly-constructed sieve against Clemson, and weren't much better against South Carolina and LSU, but the D did come to play against North Texas, and there were signs of progress against Tennessee. Even against Missouri, as a unit the defense continued to track better, make better adjustments, and make stops from time to time. And against Vanderbilt, they actually did pretty well. Vandy scored 31 points, but one TD was on a drive that started at the 13 yard line due to a bad punt snap, and one was on a punt reception we DERP'ed back to the Commies at the 33 yard line. And though it's easy to forget amidst all the turmoil, Shaq Wiggins totally and utterly blew up a Vandy trick play to score the first pick 6 of his UGA career. And on top of everything else, we lost Josh Harvey-Clemons to a serious-looking knee injury, and also lost Ray Drew to a serious-looking referee that apparently had a brain injury. The defense ain't to blame for this one.

I don't doubt the dumbass machine at the AJC is cranking out articles about how "injuries aren't the real problem at UGA this season," because it's their job to kick the Dawgs when we're down, and they perform that task with great aplomb. I don't doubt they're writing that, but I will be unable to verify this, as I decided long ago to let my actions speak more loudly than my words, and I now never visit the AJC's website or buy an AJC paper. Let the gasbags babble on to their heart's content. It would take true and utter ignorance to believe the asshattery they generate, and I'm willing to let insipid writers lie undisturbed.

It's at this point that I would make some sort of transitional statement about turning the page and focusing on this week's opponent, but we have no opponent this week. So, instead, I'm going to spend the rest of this article bitching about the targeting rule.

For Week 9, which will undoubtedly be one of the longest weeks in recent memory for Bulldog fans, You're On Notice, Dawg!

In one particular order: 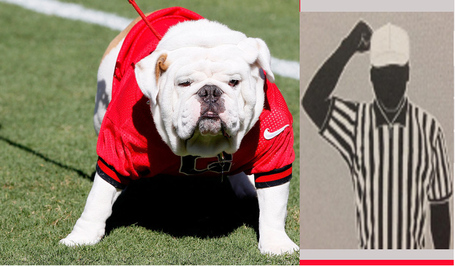 1) The NCAA Targeting Rule, and more specifically, the inconsistent application of said rule:

Ok, before I launch into (this week's) scathing character assassination of the NCAA, it's important to provide some perspective. Player safety is actually a thing that should be important. The impact that chronic head trauma and multiple concussions can have on a player's life after football has been well-documented in recent years. Combined with the fact that players are stronger and faster than ever, and therefore presumably are able to hit each other harder than ever, that means that there should (in fact, must) be measures in place to help ensure that players in vulnerable positions do not repeatedly receive life and health-threatening blows during the course of the game.

As usual, however, the NCAA started with an admirable premise, but completely screwed up everything that came after the phrase "In order to help prevent _____, we have made the following rule(s):"

The rules in question are Rule 9, Section 1, Articles 3 and 4, which state the following:

Article 3: No player shall target and initiate contact against an opponent with the crown (top) of his helmet. When in question, it is a foul.

Article 4: No player shall target and initiate contact to the head or neck area of a defenseless opponent with the helmet, forearm, hand, fist, elbow or shoulder. When in question, it is a foul.

Note 2: Defenseless player (Rule 2-27-14):
• A player in the act of or just after throwing a pass.
• A receiver attempting to catch a pass, or one who has completed a catch and has not had time to protect himself or has not clearly become a ball carrier.
• A kicker in the act of or just after kicking a ball, or during the kick or the return.
• A kick returner attempting to catch or recover a kick.
• A player on the ground.
• A player obviously out of the play.
• A player who receives a blind-side block.
• A ball carrier already in the grasp of an opponent and whose forward progress has been stopped.
• A quarterback any time after a change of possession

Now, let's apply that list of criteria to the following hit for which Ray Drew was ejected from the Vanderbilt game.

Drew (#47) approaches the quarterback after the ball is released, striking him and causing him to fall backwards to the ground. Is this a targeting penalty? Well, let's look at the rules:

1) If you look closely, the first part of Drew's body that hits the QB is his facemask. And it hits the QB's facemask. So, technically, this play falls under Article 4 above.

2) Furthermore, per Note 2, the QB is, by definition, a "defenseless player," as he has just completed a pass attempt.

Therefore, by the strict letter of the written rule, Ray Drew is guilty of targeting. And this is why the rule, as written, can be used to facilitate horrible miscarriages of justice like that proffered upon us in this game. Because, if you will also notice in the above picture, Drew clearly does not intentionally hit the QB with his head. In fact, you can see him lean his helmet back as far as possible just before striking Austyn Carta-Samuels. In addition, Drew is clearly slowing down by the time the hit comes, and he doesn't follow through with his body, only using his hands to essentially shove the QB down after the initial hit.

At worst, this is a roughing the passer penalty. But because the strict letter of the law allows officials to be completely subjective in handing down these judgements, with no regard to the spirit of the rule and the question of whether or not a dangerous play actually occurred (whether intentional or not), one of our best defensive players gets ejected for the rest of the game. (And I'm not even going to address at length the most disturbing aspect of that gif, which is the fact that the referee (in the foreground) was pulling his flag out before Drew even hits the QB. I'd like to know exactly what he was preparing to toss the flag for before that hit. Also, if you look at Drew's jersey at the very beginning of the gif, you can see it ripple from where the lineman, who was holding him, finally let go.)

And speaking of unintended consequences, let's move on to the Ramik Wilson targeting penalty.

This is the only gif I could find of this play, and it's not as revealing as the angle that was shown during the game. Still, however, you can clearly see that Wilson hits the Vandy receiver in the chest with his shoulder pads (and no other part of his body). What could possess a referee to call a targeting penalty after witnessing this play? It would be comical, if the word "comical" didn't carry a connotation of something actually being funny.

Fortunately, the ejection for Wilson was overturned, but unfortunately, the NCAA rulebook does not allow the penalty itself to be overturned; only the ejection. Ostensibly, the officials don't want their penalties being reviewed by the booth and invalidated, but as we saw on this play, a single penalty can change the course of an entire game. Vanderbilt was going for a 4th and 4 when Ramik Wilson made this awesome (and legal) hit, causing a Vanderbilt receiver to drop the ball. As a reward for making a stand on 4th down and stopping the Vanderbilt offense, the Bulldog defense was penalized 15 yards and told to suck it up and stop them again, but starting from the 15 yard line, and without hitting them too hard this time.

I don't blame the defense for giving up a score after that. I mean, hell, if you can't hit a receiver hard enough to make them drop the ball, how are you supposed to defend them? During the early days of restrictor plate racing in NASCAR, Dale Earnhardt, Sr. famously cricitized the rule in an interview by asking, "Hey, do you want to race or not?" In the same vein, I have to ask the NCAA, "Hey, do you want to play football or not?"

Football is inherently a physical game. Football is inherently dangerous. That doesn't excuse the need for safety measures and rules which are intended to make the game as safe as possible. When those rules are being inconsistently applied to such a degree that Drew's hit above is being equated to a hit like this, however:

... then it's time to revisit your original strategy. And on top of that, the ignorance displayed in "not wanting to offend the officals" by making the targeting penalty itself overturnable is so egregious that... well, I wouldn't suspect anybody other than the NCAA of being so incompetent that they're capable of coming up with something that stupid. (Ok, maybe the government. The NCAA and the government. But that's it.)

I don't even know where to go from here. I've got so much pent up anger and hostility that I've only gotten about 10% of it out. I'll save the rest for Jacksonville, though, and take it out on some poor unsuspecting beer bottle that I've just emptied. (And then I'll take it out on 23 more.)

2-8) (Unavailable, since On Notice was ejected for targeting the targeting rule in point 1.)

So, at the end of the day, here we are. We're sitting at 4-3 and staring down the barrel of a schedule that has only 1 or 2 guaranteed wins left on it (depending on whether or not you consider Kentucky a gimmie). Two Saturdays from now, Georgia and Florida will meet on the gridiron, and one team will be awarded a victory over the other. In no sense of the word, however, could the team with the higher score in two weeks be called a "winner." At this point, there are no winners (for either team). There is only a smoking crater of a hole where the 2013 season used to be. What started out with such promise has now been reduced to wondering whether or not we'll be able to field a team that doesn't include any walk-ons as starters.