Earlier this evening, Aaron Murray held a press conference at the Butts-Mehre Heritage Hall on the campus of the University of Georgia. During the press conference, the veteran starting quarterback of the Georgia Bulldogs revealed some shocking news in light of the recent scandal involving Notre Dame Fighting Irish linebacker Manti Te'o: Aaron Murray actually has a dying girlfriend.

In an effort to preserve the integrity of Murray's words, Dawg Sports has chosen to present the contents of his press conference unedited, in their entirety, and without comment.

Murray began the press-conference with the following opening statement:

Good evening. I want to thank you all for taking the time to come down here. I know it's cold out there and it's getting late, but I want to make sure I can clear something up before it becomes any kind of distraction for my team or gets out of hand. I've watched all the stuff going on with Manti Te'o and I really struggled with whether or not to go public with this information, but I've always been an honest guy and I feel like I need to avoid any appearance of impropriety.

6 months ago, I began dating a fellow University of Georgia student named Erin Murphy. I can tell you that Erin is both a beautiful woman and a beautiful person and that I am very proud of our relationship despite keeping it out of the public eye until now.

I know how this sounds right now, but we met on Twitter. At first it was strange dating someone you only talk to on the internet but Erin and I had so much in common. We were both UGA students, we both love football, we even both like ice cream!

Over time our relationship grew from a bond of friendship to a simmering romance. I began to think to myself, "I could spend the rest of my life with this woman." About that time, Erin was diagnosed with a terminal illness. While there has been some disagreement from doctors about the cause of Erin's sickness, they have all agreed that she will die sometime during the 2013 football season.

I know how this all must look after all the publicity and press surrounding the Te'o situation but I am here to tell you that what Erin and I have is real and that she's told me she wants me to go out and win a National Championship and a Heisman Trophy for her. And, dammit, that's what I'm gonna do!

Jeff Schultz (Atlanta Journal-Constitution): Aaron, you can't really expect us to believe that you have a dying internet girlfriend too. This is some kind of joke, right?

Aaron Murray: The AJC is a joke, Jeff. This is no joke. This relationship has been growing for a long time and its just unfortunate that we're being judged because of the Manti Te'o hoax. But I figured people might have doubts about whether Erin was real, so she agreed to let me distribute her Twitter profile picture to the media.

Murray then provided several hundred copies of the following photograph to media members: 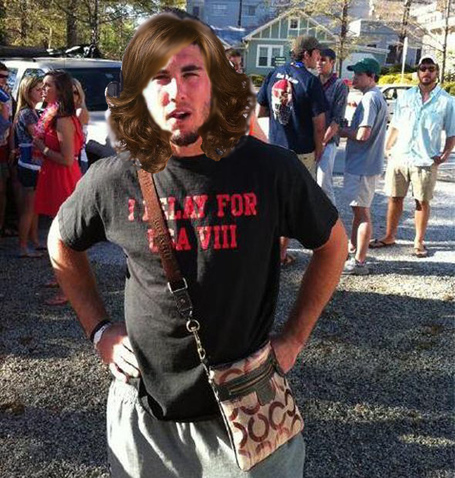 Schultz: Wowza! I'm not gonna lie to you Aaron... she's stunning. Listen, just so I can feel like I've done my due diligence, let me ask... if I were to check with the University, they'd have her enrolled this semester right?

Murray: Umm, well she's actually auditing some classes this semester... but that's just because she's sick and all and has all those doctor's appointments.

Schultz: Alright, good enough for me. Thanks Aaron.

Seth Emerson (Macon Telegraph): So Aaron, now that we've conclusively established that Erin is in fact a very real and very sick girl, what can you tell us about the disease that will strike her down just in time for your impending Heisman campaign?

Murray: We've seen several specialists and they've been unable to come to a consensus on the actual disease. Its basically been narrowed down to acute amoria phlebitis or an advanced form of Herpes Simplex 10... which the doctors have assured me is NOT contagious. I personally feel it's probably the one y'all find more sympathetic and inspiring. Either way, we're certain she won't make it to Christmas.

Emerson: I'm impressed with how well you seem to be handling all this. That's the kind of character you usually see in a Heisman Trophy candidate.

Murray: Thanks, Seth. Its funny that you should say that because I've always found it fascinating that the Heisman seems to focus as much on a story or narrative as it does on on-field performance. But I'm so lucky to have Erin in my life... even if its just for a short time. And the fact that her death might significantly improve my chances at the Heisman next season really hadn't entered my mind.

Gentry Estes(247sports.com): When you look at next season, what do you think are the chances of Georgia finally getting into that elusive National Title game?

Murray: Well they obviously got a lot better once we found out my girlfriend was dying!

Estes: Yeah... about that. Can we contact Erin just to verify your story?

Murray: Erin values her privacy as she spends her last months here on Earth and would prefer not to be contacted. I'm sure you guys understand. However, if you'd like to invade our privacy by inappropriately gawking at her slowly dying stream of tweets, you can find her on her new Twitter account @Dying4Heisman... her old account got erased or something.

At this point, Sports Information Director Claude Felton told the press that time was almost up and that there was only time for a few quick final questions.

Brent Musburger (ESPN): I have to tell you Aaron, your girlfriend is beautiful...just beautiful. I mean really. I don't mind telling you that if I was a much younger man...

Murray: Mr. Musburger, for everyone's benefit I'm gonna stop you right there. I appreciate your... enthusiasm... but to be honest you're starting to really creep everybody out.

Michael Carvell (Atlanta Journal-Constitution): Aaron, off topic, but what does Nick Marshall's high profile defection to Auburn mean for the perception and status of the Georgia program? Mark Richt has lost a step hasn't he?

Murray: You've been spending too much time stalking teenagers, Michael. Shut up.

Chuck Oliver (680 The Fan): Along those lines, there are people who say that Mark Richt and you specifically come up short on the biggest stage against the biggest opponents. Do you have any response to that?

Following his question, Oliver was rendered unconscious by an officially licensed Georgia football. No one in the audience could identify the assailant with certainty, but following the commotion it was discovered that Aaron Murray had left the building.

Dawg Sports will continue investigating the legitimacy of Murray's claims (since we can all agree no one else in the media will bother to) and will bring you additional details as they emerge.

Until then... Get Well Erin! And GOOOO DAWGS!