We are heading down the stretch as National Signing Day, sometimes known as "I really need to get a life" Day draws closer. Normally, I'd make an attempt to immortalize a prized recruit in food. However, the last day or so hasn't quite been normal.

Share All sharing options for: Crock Pot Recruiting: Something Different

Yesterday, our fearless leader/wordsmith formally notified everyone that he would be stepping down as the Managing Editor of Dawgsports. Although the staff, including yours truly, has known about Kyle's present and future plans for several weeks, I guess once you actually read the written word it makes all the more real, and that makes me a bit blue. Again, it's not like Kyle won't be around, but dang it! Some things are habit forming and reading Kyle's prose is one of those things. I've learned more Latin phrases over the last 7 or 8 years than I did in 4 semesters of the stuff in college. I thought concision was a surgical term. I certainly didn't know that a comma had an entire philosophy behind it. This is the kind of knowledge that might just get me the big bucks on Jeopardy! one day. It's important stuff. And although I only briefly met Kyle in person once (and it was memorable...halftime of the 2011 Auburn vs. Georgia game), I feel like I've known him since we were kids. 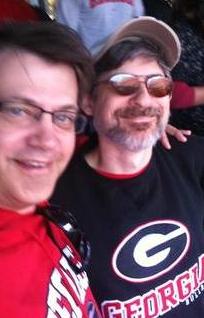 If Kyle were a writing recruit, he'd be Herschelesque; a certain 5-Star. He'd have coaches all the way from Southern California camped outside his home. The recruiting services would be tripping all over themselves to get an interview. He'd get scholarship offers from all over the country from the finest English and Linguistics Departments in the Land. Except for Tech. They'd offer him a free ride to write code. What a waste.

Anyway, Kyle - the recruit - should be immortalized in food, don'cha think? Now, I had something planned entirely different for this week's episode of Crock Pot Recruiting, but drastic times call for drastic recipes. And this one is straight off the interwebs although I vetted out the good ones from the mediocre. So, without further delay, here's it is:

Here's what you do:

In a slow cooker, combine soup, flour and pepper until smooth.
Stir in chicken, celery, green pepper* and onion
Cover and cook on low for 7-8 hours or until meat juices run clear
Stir in peas and pimientos
Cook 30 minutes longer or until heated through.
Serve over hot rice or biscuits

I was actually planning on naming a dish after someone who de-committed last week. Naim "Tikka Mustafaa" decided he wanted to go play somewhere in the Dust Bowl. No soup Slow Cooker for you!

I haven't tried this dish, but it's highly rated and looks pretty easy to prepare. I was tempted to chose a recipe that had approximately 2,500 ingredients in honor of TKK, but this'll have to do. Anyway, if you get a chance and make it let me know how it turns out.

Next week, I'll have another sure-fire Crock Pot hit named after someone who is considering or will be wearing the Red 'n Black soon. Until then, (Dawg) Bone Appetite!