Georgia Bulldogs at Missouri Tigers: Too Much Information

Share All sharing options for: Georgia Bulldogs at Missouri Tigers: Too Much Information

@dawgsports @jaykorf001 I threw up off the top floor of a Mizzou dorm in 1999 and yelled Go Dawgs! Everyone cheered. Gracious indeed.

As you may have heard, the Georgia Bulldogs are playing the Missouri Tigers tomorrow night. This may have garnered some passing mention here in chuckdawg’s preseason preview and on this week’s podcast, as well as at Get the Picture, the Georgia Sports Blog, Rock M Nation, and SB Nation Atlanta. Really, it’s open to debate what I can add to that, since, at this point, you’ve already been inundated with Too Much Information, but, heck, we’re here, so let’s give it a whirl:

Am I the only one who still finds this whole thing unbelievably weird? Look, I’m a traditionalist; the notion that the Florida Gators win regularly in Jacksonville still strikes me as an inexplicable aberration, I am genuinely disturbed by the idea that we have gone more than seven seasons without playing the Clemson Tigers, and, in my mind, the Arkansas Razorbacks and the South Carolina Gamecocks remain "the new guys." I haven’t yet gotten used to what seems to me the thoroughly bizarre idea of playing the Tennessee Volunteers annually, and now you’re telling me that Georgia fans are going to have to book flights into St. Louis every other autumn to play a division game? I’m sorry, but that’s just nutty. 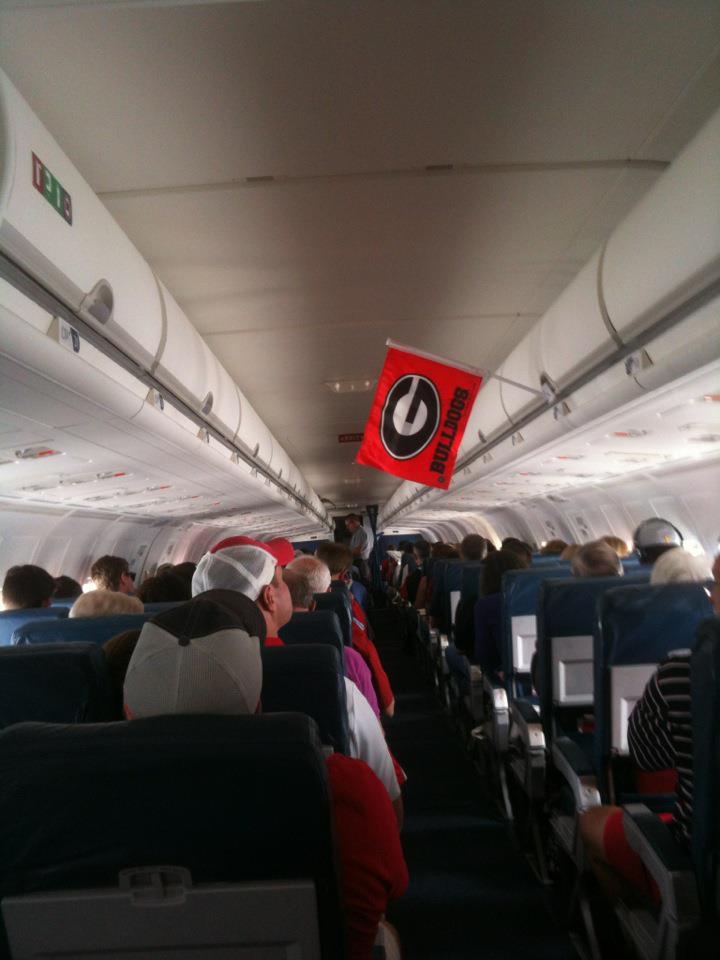 Westbound and down in the SEC East! (Wait, what?)

That is in no way a slight against Mizzou. The Tigers represent a quality university in a populous state that makes as much geographic sense in the SEC as Arkansas does, and Missouri’s overall athletics program is good and rising. Among the Tiger partisans I have met in the blogosphere, the ratio of good guys and gals to jerks probably runs 9:1 in favor of the more favorable faction of fans. (Oddly enough, the Mizzou fans I have encountered on Twitter tend to run 9:1 in favor of humorless snotbag jacklegs, but that could simply be a function of Twitter being inherently an obnoxious medium.) From everything I gather, the Missouri people are good folks.

Nevertheless, I still can’t wrap my brain around the idea that this isn’t the front end of another one of those cross-country home-and-away two-game sets Damon Evans regularly scheduled, though, given the way the Bulldogs’ two trips to Big 12 country went, I’m certainly glad this is a conference game. It just hasn’t yet dawned on me in any meaningful sense that this contest counts in the SEC standings.

It has, however, dawned on the Mizzou faithful, in a big way. While driving up and down the length of I-75, Georgians have been reminded for months that the Tigers are “proud to be SEC,” and that conference pride will be on full display at kickoff tomorrow night, albeit tempered by a measure of indignation at the idea that the team from the Show Me State still has to show us something, in spite of the fact that Missouri has posted a better record than Georgia over the last five seasons.

All right, enough, already; they’re glad to be here, but they’ll settle down, and we still think it’s weird, but we’ll get used to it, and here we are, with a couple of programs who actually have a lot in common, and I’m not just talking about the two universities’ journalism schools. At times, both head coaches have been on the hot seat for reasons not readily apparent to outsiders, and both offensive coordinators have been criticized harshly for reasons not readily apparent to statisticians. (After much intensive research 30 seconds of Googling, I was unable to determine whether Missouri offensive coordinator David Yost is related to the Michigan Wolverines’ Fielding “Hurry Up” Yost, which is a shame, because that would be a cool connection: Fielding Yost’s first Maize and Blue squad, which went undefeated and won the first Rose Bowl, featured a guard, Dan McGugin, who went on to become the successful skipper of the Vanderbilt Commodores. Coach McGugin’s tenure in Nashville overlapped with that of Vanderbilt player and assistant coach Alex Cunningham, who left the Music City to take charge of athletics at the Gordon Institute in Barnesville, Ga. Coach Cunningham took his Gordon baseball team to Athens in the spring of 1910, at a time when the Red and Black were in the market for a new head football coach after having gone through 14 of them in the preceding 18 seasons. Gordon beat Georgia, 11-0, that day, and Steadman Sanford was so impressed that he followed Coach Cunningham to the train depot after the game and offered the visiting coach a raise---from $1,300 a year to $1,350---to take over the baseball and football programs in Athens. Coach Cunningham accepted, bringing with him to the Classic City the star player who had led Gordon to victory that day: Bob McWhorter. The rest, as they say, is history.)

Dang it, I got sidetracked again, didn’t I? Sorry; I don’t mean to keep drifting into reverie. I’ll try to focus on the here and now once more: Missouri. In the SEC now. O.K., got it. Not any stranger than Arkansas. All right, stats; let’s look at some stats. How ‘bout this: Georgia is fifth in the league in rushing offense, passing offense, scoring offense, total offense, and third-down conversions. Wait, can that be right? Yeah, College Football Statistics say so, so it must be true. Of course, the Tigers come in with that high-octane Big 12 aerial attack, so it’s no surprise that Mizzou leads the SEC in scoring offense, ranks second in rushing offense, and is eleventh in the conference in passing offense. Hang on a minute, what? I’ve spent all summer worrying whether Alec Ogletree and Bacarri Rambo would be back in the lineup against a team that is ranked 82nd nationally through the air and has averaged as many yards per rush (7.3) as it did yards per pass attempt? Yeah, I know it was just one game, but still!

Here’s a stat for you: Missouri and Georgia rank first and second, respectively, in the conference in average yards per kickoff return. That could matter a great deal, because I suspect there will be a lot of kicking off going on in Columbia---no, I’m not going to call it “CoMo”; we don’t call our capital “AtGa”---tomorrow night.

Yeah, yeah, yeah, those are all first-game stats from 60-minute scrimmages against visiting patsies; those numbers tell us nothing, so it’s time to give in completely to my traditionalism. How have the ‘Dawgs historically fared when facing a current conference coeval for the first series meeting for which both teams were members of the SEC? What the Red and Black will find out against Mizzou this weekend, they found out against Auburn and Florida in 1933, Alabama in 1934, Louisiana State in 1935, Tennessee in 1936, Kentucky in 1939, Ole Miss in 1940, Mississippi State in 1950, Vanderbilt in 1952, and Arkansas and South Carolina in 1992. The bad news is that, in those eleven games, the Bulldogs went 5-6 . . . but the good news is that Georgia was 1-3 between the hedges, 1-3 at neutral sites, and 3-0 on the road.

The Feel Bad Stat of the Week

Georgia played its first regular-season game west of the Mississippi River in 1931, the Red and Black’s 38th season of intercollegiate competition on the gridiron. The Bulldogs lost that game 60-0, and, while that remains the largest margin of defeat in the Athenians’ history, the result was something of a harbinger of things to come, as the Classic City Canines have gone 6-8-1 all-time in regular-season road games on the far side of the river, perhaps ironically, known as the “Old Man.”

The Feel Good Stat of the Week

Twice before, the Bulldogs have served as the de facto SEC welcoming committee for incoming members of the league. In the final game of the 1991 campaign that was known from the outset to be the Hogs’ last in the Southwest Conference, Georgia spoiled the Razorbacks’ transition to their new home by beating Arkansas, 24-15, in the Independence Bowl. In the opening outing of the ensuing autumn, the ‘Dawgs traveled to Columbia---the one in the Palmetto State---for the Gamecocks’ initiation into the SEC. Georgia came home a 28-6 winner after that September road night game two decades and two days ago.

I’m not going to lie to you; this game, at this time, scares me more than a little. Ironically, if we were playing in Columbia, S.C., tomorrow and in Columbia, Mo., in October, I’d feel substantially better about both games, so I am sorely tempted to heed the wisdom of a guy who can’t pronounce “‘Dawgs” and evidently has never heard of the Peabody Awards went 5-0 in last week’s picks or two guys who went to Florida and Georgia Tech, respectively, and, therefore, may be counted on to be completely impartial concerning Georgia may have picked against the Bulldogs (then again, at least one of them may not have) or a former bandwagon Auburn fan who went to Michigan casual Georgia fan who wouldn’t mind seeing the Bulldogs lose. However, conscientious, and stat-conscious, Mizzou fans give me hope, as does Matt Hinton, even if he did mistake new Bulldog Keith Marshall for former Bulldog Nick Marshall.

So, too, does this: Mark Richt is 31-12 in night games, 38-10 in true road games, and 30-8 in conference contests played on the opponent’s home field. Ere anyone argues that those ledgers are dated---Coach Richt went 9-0 in his first nine road games as the Bulldogs’ head coach---I would hasten to add that, since dropping their fifth away game in eight tries in Boulder in 2010, the Red and Black have won five of their six most recent road tilts, with the lone setback coming against the eventual national champion.

While the “hot seat” talk was squelched by last year’s Eastern Division title, this remains a big game after 2011’s “meh-and-four” campaign extended to nine games and two seasons Georgia’s streak of losses to teams that would end the autumn in the top 25. The Tigers are a good bet to be ranked in January, so this is a golden opportunity for the Classic City Canines to register a significant win in the other fellows’ house for the first time since the end of the 2009 regular season.

There’s another reason why this game matters, and, no, it isn’t because Sheldon Richardson needs an old man to give him a stern lecture on respecting his elders; being able to give “Number Thirty-Faux” the most effective retort in all of sports (“Scoreboard”) would be merely a happy fringe benefit of victory. No, the reason a conquest in this contest would be so consequential is this: Georgia has never failed to capture the Southeastern Conference championship in any season in which it defeated Missouri.

The last time the Bulldogs tamed the Tigers, it was by a 14-point margin. In this most mystifying season of transition, I find myself, more than ever, liking history, so I like history to repeat itself, albeit with a few more fireworks.

Wait . . . Twitter says Ogletree and Rambo stayed behind in Athens? Aw, dang! That changes the whole thing! My mind and my spirit would side with Georgia at full strength, but, with key starters replaced by second-stringers, my head can’t be convinced of what my heart hopes is true.