For the benefit of our Missourian visitors, this is Cocktail Thursday, the portion of the Dawg Sports pregame program in which I suggest to you a tasty game-themed libation for the upcoming contest. This being the South there's usually bourbon and good-natured ribbing. This week is no exception, at least on one of these two counts. You see, here at Dawg Sports we celebrate the bon vivants of college football with the passion that they deserve. And we heard that Mizzou has a guy who enjoys a cocktail or two, so we figured we'd ask him to join us this morning. Surprisingly he accepted. Ladies and gentlemen, Cocktail Thursday, with special guest Coach Gary Pinkel. 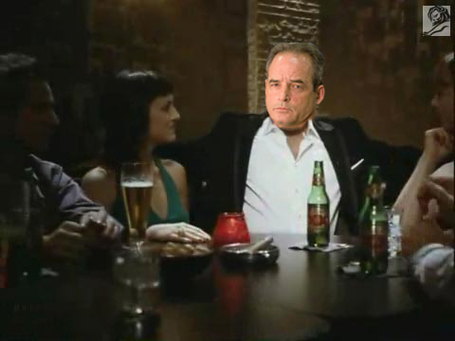 This is not actually a picture of Gary Pinkel. That's how you know there's no justice in the world.

Dawg Sports: Coach, thanks for joining us today. To be honest we've asked a lot of opposing coaches to come on the site, but with the exception of Les Miles, I think you're the first one to accept the invitation.

Coach Pinkel: Glad to be here kid. We at Missouri look forward to a long and successful tenure in our new conference home. We hope to engage you in spirited competition on the field and spirited dialogue off of it. Now where do you keep the hooch?

Dawg Sports: Oak cabinet next to the umbrella stand, the one with Kyle's copy of I'll Take My Stand on top and The Quincy Carter Of Accountants' Mike Carvell dartboard over it.

Dawg Sports: So, what are you mixing up there, Coach?

Coach Pinkel [pulling out bottles, tossing them haphazardly about, spilling vermouth on RedCrake's copy of Futbol Monthly]: This little baby is the secret of my success. The four wide, halfback pitch to the weakside elixir that makes the Pinkel attack go, man. I shotgun the things one after another while I'm breaking down film, and I swear by the mental clarity that results. I call it . . .the Pinkel Colada. And you're going to need one for each hand.

Dawg Sports: Um, that looks a lot like Red Bull and vodka.

Dawg Sports: And that was actually varnish. I've been meaning to refinish the liquor cabinet but haven't quite gotten around to it.

Coach Pinkel: I'm not even kidding man, Chase Daniel was drinking these things out of a toddler's sippy cup on the sideline during the 2007 Kansas game. The toddler by the way was named Todd Reesing . . .

Dawg Sports: I don't doubt it. Nevertheless I'll take it from here.

Coach Pinkel: Suit yourself, Space Cowboy. [downs fourth Pinkel Colada, staggers to the corner, passes out under Spears' desk, using an old stack of racing forms as a pillow.]

Dawg Sports: Alright. Now that we've done our part for conference unity let's get down to actual business. The question of the week continues to be how the Georgia secondary will match up against Missouri's receivers. T.J. Moe is a veteran slot receiver who'll get his hands on the ball early and often after racking up 54receptions for 649 yards in 2011. Freshman Dorial Green-Beckham is likely to improve every week, but by virtue of his 6'6 size is already a matchup problem, especially on the goal line. In watching film of QB James Franklin it seemed that when he's struggled it's because he's gotten out of rhythm and fallen into some bad habits (poor footwork and a hurried, irregular throwing motion principally). But I don't think Coach Lakatos and his charges can count on that. Instead they'll need to play disciplined coverage and be prepared for some wrinkles. Missouri has had time to gameplan for a Georgia squad that will be shorthanded in the secondary. Don't believe all this crap about "playing the scheme and not the personnel." The Tiger coaches have at least spent some time considering how the plan will change if they find themselves with matchup advantages. They didn't spend the whole offseason focusing on Southeastern Louisiana.

If I have any specific worry, it would be Connor Norman alone in space against the Missouri receivers. I don't doubt Norman and Coach Richt's proclamations that he knows what he;s doing and is a sure tackler. That's all well and good. But I haven't seen him do the job against SEC caliber competition. I did see him miss an open field tackle against the Buffalo Bulls, and while he wasn't really tested that much, I could tell it wasn't Bacarri Rambo out there playing centerfield. This worries me a lot.

Of course there's a very good chance that Connor Norman will come storming out of the locker room in Columbia on Saturday night in much the same manner that Tra Battle did as a walk-on safety in his first big game. Hey, stranger things have happened. And when Norman comes stormin', I plan to enjoy a Stormin' Norman.

It's made by stirring 2 ounces of scotch, 1/2 ounce of Drambuie, and 1/2 ounce of vermouth over ice then straining it into a glass. Garnish it with a twist of lemon peel if you have it. It's a drink for people who don't overthink things and enjoy getting straight to the point. Those are attributes I can admire in a safety. I'll see you tomorrow for the Friday Tailgate. Until then . . .