You're On Notice, Dawg! Week 6

I am conflicted, y'all. Truly conflicted. I wanted to start out by saying, "Well, dang, that was ugly." But wait... was it? Our offense made horrible, egregious mistakes. But we scored 51 points! Our defense let in 37 points (not counting the pick 6, which the defense was not directly involved with in any way). But they got 3 straight turnovers to win the game! And special teams... (curls up into fetal position) (starts sucking thumb)

Share All sharing options for: You're On Notice, Dawg! Week 6

So, yeah... it was an ugly-as-hell game. But it was also a great game. And we won, which always makes the day better. Now, it's time to look ahead to this week's game, which is against probably the best team we'll play all year in the regular season. Therefore, I'm letting the following people know that, for Week 6, You're On Notice, Dawg! 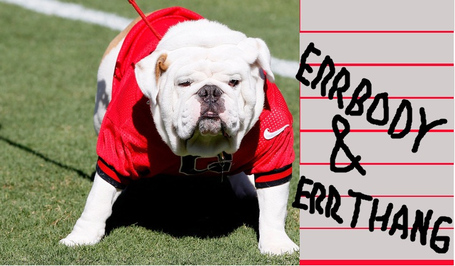 Yep. ERRBODY and ERRTHANG. Everything was screwed up yesterday, and yet everybody somehow managed to come up big when they needed to... so everybody and everything needs to be on notice this week to step up against South Carolina. Let's run it down:

- Offense: Our offense has absolutely been off the chain so far this year. We have yet to score less than 40 points in a game through the first 5 weeks, and I have to give all the boys credit for that, in addition to Coach Bobo, and especially OL coach Will Friend.

Unfortunately, Aaron Murray's proclivity from previous years towards making big plays for the opposition reared its ugly head for the first time this year. The pick-6 wasn't entirely Murray's fault, since it was tipped at the line... but it still happened. (But, then again, our very next play from scrimmage was a long Keith Marshall touchdown. See? Horribly bad and terribly good, back to back! I hated this game while simultaneously loving it.) Our offense had a pick-6, a fumble at the 2, and a fumble at the 18. So, as far as I see it, our offense is responsible for 21 of Tennessee's 44 points.

To beat South Carolina, our offense can't give them 21 points like we did this week. Hopefully we won't need to score 51, either... but with the upgraded defense we'll be seeing against the Cocks, we likely won't be able to do so, anyway.

(And by the way, I'm totally on board with the "Gurshall" thing. Todd Gurley isn't Herschel, but maybe the combination of two of the best running backs in the country might approach that level, yes? #3+#4=almost #34! Todd Gurley + Keith Marshall = Gurshall!)

- Defense: I just have one question. Where the heck was Jarvis Jones? Congratulations to the Vols on completely neutralizing our best player, but I couldn't help but notice that Jones appeared to stop running on a Tennessee touchdown in the 3rd quarter when he clearly had a favorable angle on Cordarrelle Patterson and should have been able to reach him. This was a play when a flag was thrown for a block in the back, so it might have been logical for a fan to conclude that it didn't matter because the play was going to be called back, but a player can never do that. Why? Because the flag might be picked up, as this one was, and the touchdown counted. I just hope it was a momentary lapse in judgement by Jones and not a sign that his groin injury was re-aggravated.

And what the heck happened to our rushing defense? I was worried about Tennessee because their passing offense matched up well against our passing defense, but the Vols almost got 200 yards rushing against us. We'd better step up our rushing game, or South Carolina is going to embarrass us. Marcus Lattimore is better than any RB we faced Saturday... we have to stop him to really even have a chance.

And I'm just going to mention that we got lucky, too, because we had three occasions where Tennessee players were clear and free, and simply dropped easy touchdown passes. In spite of the fact that we gave up 44 points (ok, 37 and a pick-6), the point total could have been even worse.

I really have no idea what happened, but we gotta whip this thing back into shape by Saturday.

- Special Teams: OMGWTFBBQ. Two missed PAT's? Two (expletive deleted) (expletive really deleted) missed PAT's? But combined with a 50-yard field goal? Again??? Damn, son. Just damn. And Malcolm Mitchell... I know you want to make a play, dude, but you have to play smarter than that on special teams. Some of that stuff is just crazy.

At least we seem to be able to tackle on special teams, which is a significant upgrade from last year. So we have that going for us.

There is only one aspect of this team that does not deserve to be on notice this week, and I'm not afraid to give credit where credit is due: 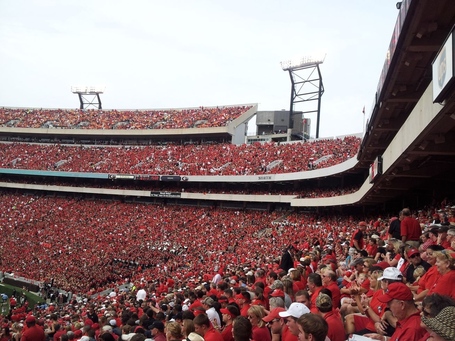 This is yesterday's student section. You will notice that the upper deck is full. Nicely done, students. Very nicely done.

So, we're down to it. This is one of the two biggest weeks (from a competitive standpoint) of the year, folks. College Gameday is coming to this game in Columbia... and I love it. You'll hear a lot of roosters crowing on TV, see a lot of industrial-looking dumpy crap (if they're set up near the stadium), and you'll even see a few Washington State flags. There will be many wonderful distractions for this South Carolina team, and I wish them the best in hosting the traveling circus that I hope never comes back to Athens. Because what you won't hear on Saturday morning is what you need to be watchin' out for, Gamecocks..