You're On Notice, Dawg! Week 5

Share All sharing options for: You're On Notice, Dawg! Week 5

(Reminder: The New SB Nation United format is coming out soon. If you haven't heard about it, you can learn more here. )

Hi, I'm Troy McClure Vineyarddawg! You might remember me from such "On Notice" posts as last week, and the week before that! I'll just bet you're thinking that, with a beat-down like that in a game that was aching for a beat-down, there's no possible way I can be "Larry Munson-esque" in my pessimism about last night. Well, you've got some nerve, mister. Besides, you're wrong!

Historically, under Mark Richt, we play, on average, one game every year where everything goes "just right" and we blow the doors off of our opponent in a beautiful, glorious beatdown. Last night was that game for 2012... and we didn't really need to play that perfectly to beat Vanderbilt. We wasted our "perfect day," and we still have to play Tennessee, South Carolina, and Florida over our next 4 games. I'm calling it right now: we need to be on "upset alert" this week as the Vols come rollin' into town. After a beautiful showing like that, we are ripe for a letdown against a Volunteer team who isn't as bad as you're thinking they are.

But let's be honest, there's just not much with which to find fault this week. This was a glorious game, and seeing James Franklin's bitchface over and over again on my DVR'd TV replay was cathartic and wonderful. The only thing that was missing was a quote from Todd Grantham after the game saying, "No, there are no hard feelings between me and James Franklin. We buried the hatchet. In his head."

Therefore, I had to branch out a little bit in letting the following people know that, for Week 5, You're On Notice, Dawg! In no particular order: 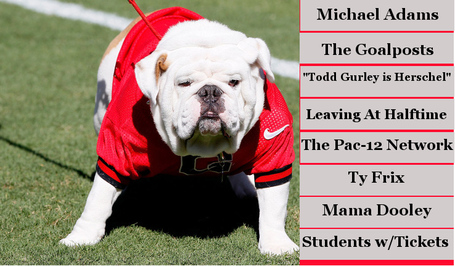 1) Michael Adams - Why Michael Adams? Because he's a jerk, has stolen money from and is a disaster for University, and everybody that has ever worked with him hates him. Plus, I have it from a very authoritative source inside the UGA administration that he was overheard saying to someone prior to this week's game, "Sure, I'll be happy to Volunteer for that." What a jerk.

2) The Goalposts - Don't be mad, bros. I know you guys have scored 3 PAT's for us in the last 4 games. But I also know that you're going to turn against us at exactly the wrong time one of these days, and someone not dressed in red and black is probably going to tear you down because of it. Just be warned. It's in your best interest to keep helping us out, alright?

3) People who are continuing to say that Todd Gurley is the next Herschel Walker - As I said in the week 2 version of "On Notice," it really doesn't bother me that much that I have to keep putting these people on notice, because it means that Todd Gurley is good. Damn good. But Todd Gurley is not the Goal Line Stalker. No one is like Herschel, and no one ever again will be. And folks seem to be completely ignoring Keith Marshall, who is a beast in his own right. Gurley might be better than Marshall, but it's only by a very small margin. Both of them are big-time players.

Todd Gurley is the next Robert Edwards, or possibly the next Garrison Hearst. And I'm extremely happy about that fact. In fact, I even tweeted #RunLikeAGurl last night. But he is not the next Herschel. 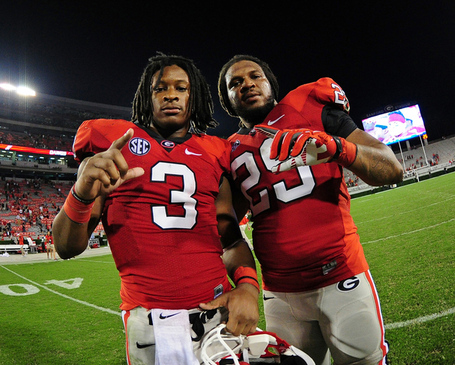 It's possible that the amount of greatness in this picture just broke your computer. I do apologize about that. (Photo credit: Scott Cunningham/Getty Images)

4) Fans leaving at halftime - Or, for that matter, let's also include fans who leave before the 4th quarter. Look, people, even if you're a season ticket holder, you only get 6 chances in an entire year to see the Georgia Bulldogs play in Sanford Stadium. And during one of those games, you're taking an SEC team out behind the woodshed and pounding on them like they were a red-headed stepchild. So, you get bored and decide to leave? Whiskey. Tango. Foxtrot.

I can understand if it's FAU or Buffalo, but this was the beat-down of a whiny jerk that needed to be beaten down. I can even understand leaving when the game well in-hand in the 4th quarter after we put in the backups, since it's a late night game and some folks have long drives back home. But to leave at halftime en masse?? I mean, damn, why did you even come to the game? Unless you have a medical or urgent family issue that requires your attention, you should never, ever leave at halftime. Ever. 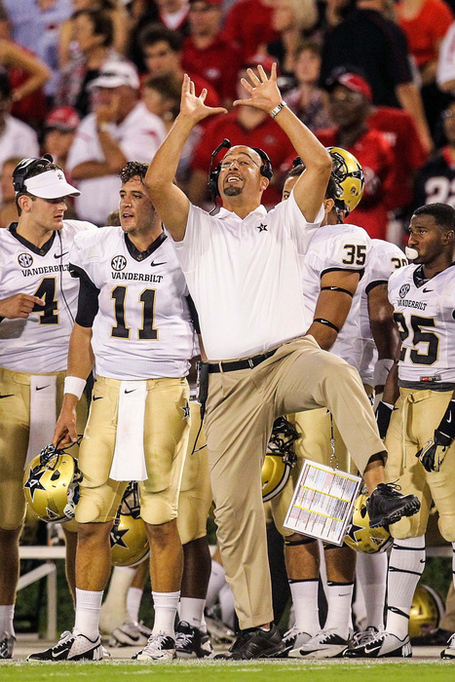 Besides, when you leave early, you miss FRANKLINDANCE! (Photo credit: Daniel Shirey-US Presswire)

5) The Pac-12 Network - Ok, like I said, I'm having to branch out a little bit on this edition of "On Notice." And as I read the propaganda issued by both sides of the conflict between the Pac-12 Network and DirecTV, I find myself coming down squarely on the side of DirecTV.

From reading the information that has come out about this disagreement that has kept the P12N off of DTV, it seems that the sticking point is whether or not the P12N will be included with the base DTV subscriber package or as part of the "Sports Pack" that DTV offers.

I'm sure the difference between the two numbers is signficant for the P12N, but their position makes absolutely no sense. The Sports Pack on DTV already includes the Big Ten Network, CBS Sports Network, NBC Sports Network, and every other peripheral sports channel that appeals primarily only to sports fans and not the general world at large (including every Fox Sports affiliate in the country). So why would the P12N insist on being treated like ESPN, which is the only sports channel(s) DTV does include in its basic subscriber lineup?

I'm not going to urge the Pac-12 to stop being greedy, because I really don't care if their network ever gets onto DirecTV or not. I just hope DirecTV wins, however it works out. 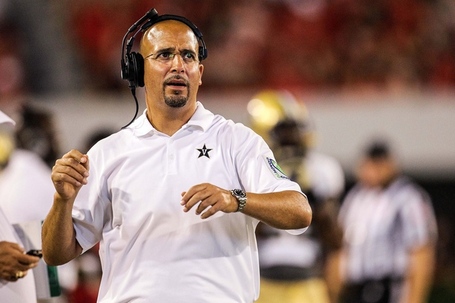 Sorry, coach. I know you really wanted to see the Pac-12 network and scout out whether or not you want your next coaching job to be bringing culture change to Colorado, U-Dub, or possibly Utah. You're just going to have to wait for now, though. (Photo Credit: Daniel Shirey-US Presswire)

6) Ty Frix - Sorry, big guy. You're a Damn Good Dawg, but you're also basically the only person on the entire team that made a mistake last night. The snap on that botched PAT was too high, and even though the holder could have caught it, the snap was still slightly above eye-level. One bad snap in four years isn't exactly an egregious issue, though.

7) Mama Dooley - I know you have an innate need to support your son, especially since he's in the "getting the resume ready" portion of his current job, but I'm just telling you now, Mrs. Dooley. Don't wear that puke orange into Sanford Stadium. Just don't do it. You won't be quite as unwelcome as Will Muschamp, since you're not technically turning your backs on us, but we don't forget. (Please don't tell Pat Summitt I got onto you, though. She scares me.) 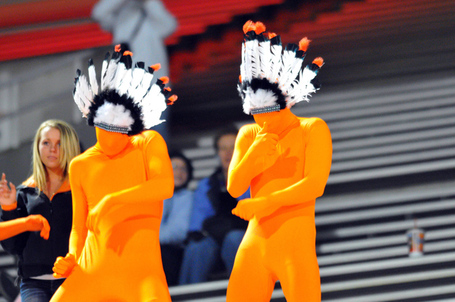 Though I will admit that if you come to the game dressed like this, some of us might just love you forever. (Photo credit: Bradley Leeb-US Presswire)

8) Students with tickets - I actually see progress being made on this front. I'll give full credit to the administration for taking some student tickets and selling them to the public for each of the past 2 weeks. And because of that, the upper deck has looked slightly less empty. But only slightly. And as long as the student sections are, by an order of magnitude, the emptiest sections of the stadium, the students will keep getting put on notice.

Finally, the role of the appropriately-named "Sir Not Appearing in this Article" is being played this week by pretty much everybody on the team that I didn't name. Note that this includes General Curtis Christian LeMay, who played multiple snaps without either throwing an interception or fumbling! That's a step up, General, sir!

That was a great game to be a Bulldog fan, and it showed real progress that we could pound a team that deserved a pounding. We need to keep the ball rolling this week against Tennessee, who will put up a much stiffer challenge. Fans, make sure you show up early, cheering the team on as loudly as you can... and for pete's sake, it's only a 3:30 kickoff, so stay for the whole game!