You're On Notice, Dawg! Week 2

Share All sharing options for: You're On Notice, Dawg! Week 2

Well, that was an exciting week 1, n'est-ce pas? I'll bet all of you were wailing and gnashing your teeth over our performance vs. Buffalo, then you turned the channel and watch the Gators collectively vomit on the field against Bowling Green. Nice work there, Secret Agent Muschamp! The plan is proceeding on schedule.

We came out pretty rusty in the first half, and our inexperience on defense was readily apparent, but we came to play in the second half, and that's all that was really required to win this one by 3 touchdowns. Now we move our focus to our week two opponent: The Missouri Tigers. As has been said before, this will be Mizzou's first SEC game, and the home crowd is going to be rocking. Georgia fans typically travel well, though, and I don't doubt that there will be a fair amount of red in the stands to cheer on our team, as well. This is the biggest game of the first part of our season, though, so it's time to step it up.

Speaking of stepping it up, I got quite a bit of "constructive criticism" regarding my Georgia flag thing last week. As such, I'm trying out a new system instead, that includes a homemade-photoshopped board. Let me know if you like it, let me know if you don't like it. But if you don't like Russ/Uga IX, then sir, there's the door. Please don't let it hit you in the rear end on your way out.

I'm letting the following people know that, for Week 2, You're On Notice, Dawg! 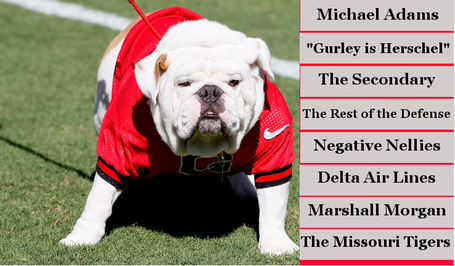 1) Michael Adams - Why Michael Adams? Because he's a jerk, has stolen money from and is a disaster for University, and everybody that has ever worked with him hates him. Plus, he's still the President of the University of Georgia, and until he's not, he's on notice.

2) People who think Todd Gurley is the "next Herschel" - I guess I have to say this every time we get a great running back, but that's cool as long as we keep getting great RB's. There is only one, and there will forever only be one, Herschel Walker. You will never, ever, again see a running back that is as good as Herschel Walker. At this point, Todd Gurley is the next Knowshon Moreno or the next Robert Edwards. And that's damn good, so let's just be happy about that, shall we? (And by the way, Keith Marshall didn't look half bad, either.)

(But be prepared to hear Mark Richt talk on his weekly show or in his press conferences about how Gurley missed an important block a couple of times that allowed Aaron Murray to be sacked, because that totally did happen, and you know he'll point it out.) 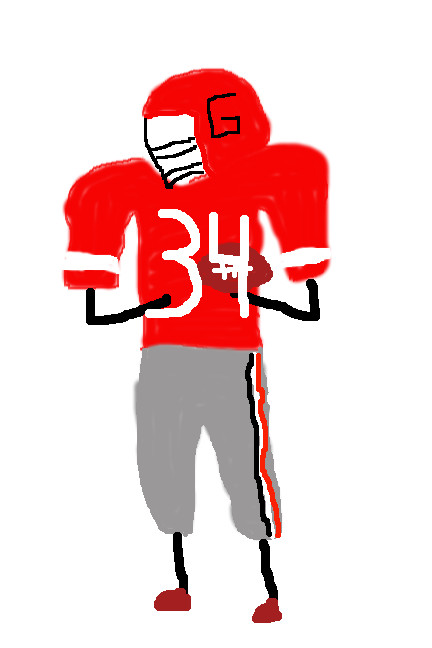 You will only ever see one Herschel Walker. And this ain't him. (And neither is Todd Gurley, even if he is awesome.)

3) Our (Depleted) Secondary - If we lose to Mizzou, this will be the reason why. We all knew we were going to miss Rambo and Commings, but I had no idea we'd miss them this much. Apparently Todd Grantham doesn't have much confidence the backups, either, because he steadfastly refused to match them up in man coverage for most of the game, sticking to zone instead.

We can only hope that guys like Damian Swann and Connor Norman got some good experience and will be better prepared for the Mizzou game, because if they're not... it could be unpleasant. Quite unpleasant.

4) Everybody Else on Defense - I never thought I'd be putting the defense on notice twice after the Buffalo game... but here we are. Sure, the OL didn't absolutely pulverize and destroy the UB defensive line, but we still scored 37 points straight-up on offense. Our defense gave up 23 points without once being put in a poor position due to a fumble, interception, or a kickoff return into Georgia territory.

Not only that, but we continually lost contain on a quarterback that's not known as a rushing quarterback. James Franklin, on the other hand is a rushing quarterback... and one that can throw it downfield, as well. Our entire defensive unit needs to play like they did in the 3rd quarter, except for the entire game against Mizzou. If don't do that in Columbia, it simply won't be good enough. 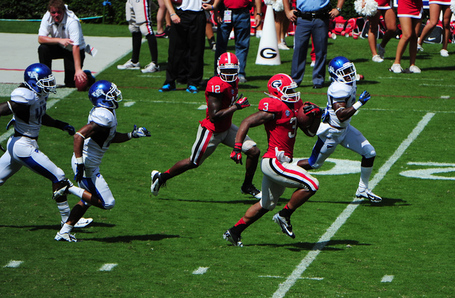 When you see a negative play and start throwing internet-furniture, you're acting like that obnoxious guy who sits one section over from me who curses and yells at the top of his lungs EVERY. TIME. a play doesn't go for a first down. And everybody hates that guy. I'm not asking you not to be upset when we're playing poorly... just remember that guy, and don't be him.

And remember this: At the end of the day, we beat a MAC team by 22 points. This wasn't a 1-AA team... it was a mid-major team with a lot of returning starters, and we played a lot of true freshmen and backups. We didn't cover the spread, but we never trailed, and we had the game well in hand pretty much the whole time, even when we were stumbling around in the first half. I'm not saying it's the most encouraging sign, but it's not discouraging, either. This Saturday's game is when we really find out what we're made of.

6) Delta Air Lines - Ok, so y'all are going to have about 20,000 Georgia fans trying to get from Atlanta to St. Louis or Kansas City, and who are probably all flying in on Friday evening. Just wanted to let you know, so you can, you know, make sure you have extra booze on hand. We like to drink away our pessimism.

7) Marshall Morgan - I know you're just a freshman, kid, but you're a kicker in the SEC. Your first field goal try was only a 45-yarder, and not only did you kick it short, but it went so wide right that it almost landed on the roof of GGY building. You have two options at this point: 1) Step it up and be an SEC-caliber kicker, or 2) Find me Mo Isom's phone number. In fact, why don't you just do option 2 regardless of which you choose.

8) The Missouri Tigers - First, I'd like to issue an official welcome to the SEC to the Tigers, and thank defensive tackle Sheldon Richardson for giving us our first bulletin-board quote of the season:

Welcome to our conference, Mr. Richardson. Thank you for pissing off our boys by calling them a Big Ten team. Now comes the part where you die.

I"ll be taking in the spectacle from Faurot Field in Columbia this Saturday, and I'm looking forward to meeting some Mizzou fans and personally welcoming them to the SEC (in a nice way, not a "Sheldon Richardson" way). And if any of you have some tips on where to eat or stuff to do in Columbia, let us know in the comments below!