You're On Notice, Dawg! Week 4

Share All sharing options for: You're On Notice, Dawg! Week 4

Good evening, Georgia fans. Well, it got interesting for a while last night... but in the end, we beat a team we were supposed to beat, and by a suitably pound-y scoreline. Let's move on to the next game... one that actually counts. And, by the way, a game we've been looking forward to playing for the last 11 1/2 months or so.

I'm letting the following people know that, for week 4, You're On Notice, Dawg! 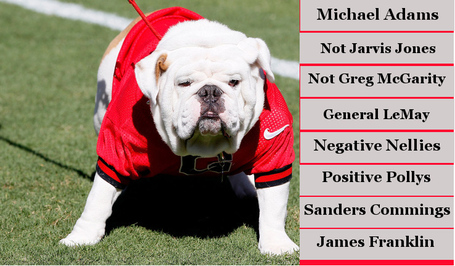 1) Michael Adams - Why Michael Adams? Because he's a jerk, has stolen money from and is a disaster for University, and everybody that has ever worked with him hates him. Plus, I have it from a very authoritative source inside the UGA administration that he hates Russ. (drops mic)

(picks mic back up)

2) Everyone on the defense except Jarvis Jones - I know Jarvis Jones is an All-American, and is basically the "quarterback" of the defense, but we looked far too vulnerable in that first half without him. I don't doubt that Jarvis could have played if we needed him, and I'm also glad that he didn't have to play for us to secure what was, ultimately, a comfortable win. But y'all need to figure out how this thing runs without him, guys. Everybody gets dinged up at some point during the season, and when Jarvis isn't on the field, we can't become "the cardiac kids" like that. 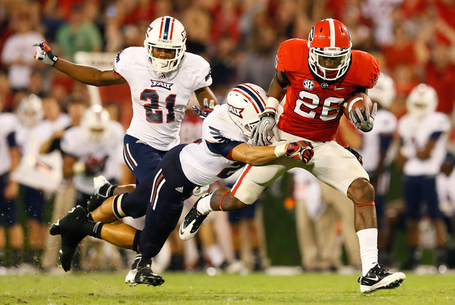 Besides, we really wouldn't mind having Malcolm Mitchell back on offense, you know? (Photo Credit: Kevin C. Cox/Getty Images)

3) Everyone in the UGA administration not named "Greg McGarity" - Ok, this isn't really a hit on the good folks at the athletic department, who, in general, have been exceptional to Georgia fans and Dawg Sports, in particular, over the last couple of years. I just wanted to brag on Greg McGarity.

Yesterday, as my tailgating group was just starting to get together on south campus about 10:00 or so (yes, we arrived late <--- Old Man tailgating), Greg McGarity just happened to walk by, stop, and remark to us, "Wow, y'all have a great little tailgating spot here." (In fairness, we do have a great little "out of the way" spot in between Snelling and the College of Pharmacy.) He then proceeded to spend about 15 minutes with us, just chatting and talking about UGA in general. We talked about how great the Mizzou fans were, what a great experience everyone had there, and he even gave me a little bit of news.

He confirmed that the only part of the 2013 SEC schedule that hasn't been set yet is the cross-division rotation. He said all of the Eastern Division opponents will keep following their set "home and home" pattern, which means Mizzou will be coming to Athens. The only part that has yet to be sorted out is who will be each team's rotating opponent from the other division, and whether that rotating opponent will be home or away for 2013. So I'm just telling y'all now... be ready to give the "good" Tigers a warm welcome in Athens next year!

As has always been my impression of the man, McGarity was just a regular guy, very friendly, and yet very much "in control" and on the ball about everything that is Georgia athletics... not only on the field, but off the field as well. I sure do hope we have him at the head of our athletic department for a long time to come.

4) General Curtis Christian LeMay - Sorry, I'm always going to call him "General LeMay", so y'all might as well get used to it. :-) Hey, as the QB, he's the field general, right??

Well, our own General LeMay had his personal Bay of Pigs on Saturday. He got almost the entire 4th quarter placed in his hands to perform mop-up duty, and he promptly threw a pick-6 to provide FAU's final touchdown. Then, after being replaced for a series, he was once again given the ball with a "run only" strategy, and proceeded to fumble the ball back to the Owls. Not the most notable start to his career, certainly. I sincerely hope that he used this game to get his "early-season jitters" done with, and that from here on out, he proves to be a "D.J. Shockley" type of backup, not a "Joe Cox" type of backup.

5) Negative Nellies - I swear, some people just aren't happy with anything... like that guy sitting to my right who just kept saying, "Really?? Really??" every time FAU got a first down, then left before halftime. (Surely it's ok to slap people who say and do things like that, right?)

At the end of the day, we beat a bad Sun Belt team 56-20, and only 14 of those points were given up on defense. Yes, we were tied with them 7-7, and also 14-14. And yes, we did give up two huge plays that should not have happened. But we won, and we won huge. Nobody better be callin' for anybody's head after this game (except for Michael Adams', and that's just on principle).

6) Positive Pollys - I don't know what you call the opposite of "Negative Nellies," but I guess I call them "Positive Pollys." After racking up impressive scorelines against all 3 of our first opponents, one of whom was a legitimately good SEC team, I would like to provide this reminder to those who are already dreaming about a date with Alabama in Atlanta and... well, whomever is going to lose to the SEC champion again in Miami.

Now, I'm not saying that the potential doesn't exist for Georgia to have a special season and come up with a big accomplishment at the end of it all... certainly, we've seen flashes of brilliance. Clearly, the opportunity is there. We've also seen flashes of vulnerability, however, and this is the SEC. We still have at least 4 solid opponents that could beat us on any given day: Tennessee, South Carolina, Florida, and Tech. And it ain't like Vandy and Auburn are just going to roll over and play dead, either. If we have a "down" day against any of those opponents, we could be on the wrong end of an ugly score.

I wouldn't start booking those reservations at DavetheDawg's Down Home Dawg Den just yet. We've got a long way to go, and we're just 3-0. It's a great start, but it's just a start. 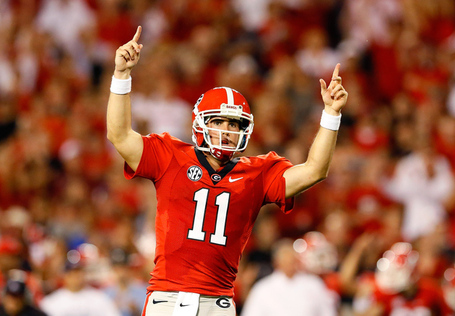 Yep. It's a right nice start. And feel free to go ahead and call this "Murray'ing." (It's different from "Griffin'ing" because he's not sitting on his butt after getting knocked down.) (Photo credit: Kevin C. Cox/Getty Images)

7) Sanders Commings - I almost left Commings off this list, but it was just too hard to ingore the fact that he looked very rusty at times on Saturday. Chase Vasser, who was also coming back from suspension, looked sharp for most of the game, but Commings was involved on both of the big plays that led to FAU's scores. On the run up the (damn) middle that went for 6, Shawn Williams was coming in on a safety blitz, which left Commings as the only man to lock down the secondary... and he was out of position. FAU's running back ran right past him, and Commings chased him down the field but just couldn't catch him. Then, on the big pass play that set up FAU's 1-yard score, Commings was just burned. Lost his man, and the man made a big play. He tackled the guy at the 1, but the damage had already been done.

I don't doubt that it was basically just rust, and he'll have it shaken off by next Saturday... but still. Directly contributing to both of your opponent's scores on offense gets you put on notice in pretty much any situation.

8) James Franklin (the bad one, not the good one) - Let's be honest, nobody really cares about Vanderbilt. The person we care about this week is James Franklin. He's got a big friggin' mouth, and he likes to run it. Also, his team hasn't backed up his big mouth so far this year with wins. He incurred the wrath of The Grantham® last year, and his constant whining about it has made him no friends in our neck of the woods. Because of Coach Franklin, Vandy won't be able to sneak up on us and steal a quick one out from under our noses like they have in the past. We've got our sights focused squarely on the Commodores this weekend, and his team is gonna get beaten. Badly.

So, actually, even though you're on notice, thanks, Coach Franklin. I appreciate all that you've done to help motivate the Georgia Bulldogs. Keep it up, bro.

Finally, the students get a break this week, but don't think I didn't notice that those upper-deck sections were still half-full at kickoff. "Students with tickets" gets a rest, but if y'all don't pack out the stadium for the 'Dores, we'll be seeing y'all again real soon. (points to my eyes) (points at students)

This is the first of our big 3-game gauntlet before the Cocktail Party... let's bring the noise and the excitement this week! It'll be an SEC night game Between the Hedges... we need it to get crazy. Prepare yourself appropriately!